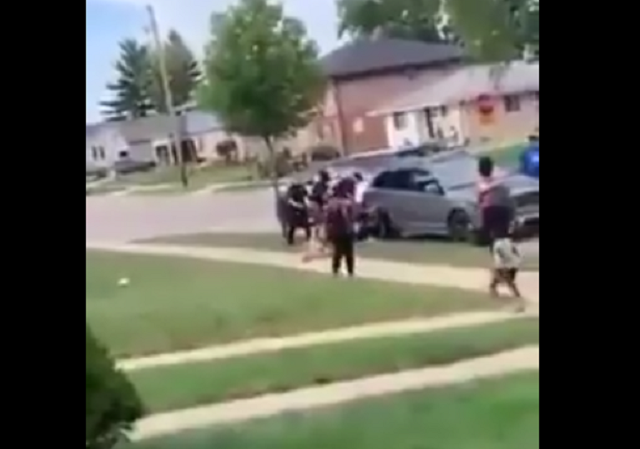 Federal prosecutors announced that they will not be filing charges against the police officer who shot knife-wielding Jacob Blake.  This announcement comes nine months after local prosecutors reached the same conclusion.

We covered the shooting and the subsequent antifa/BLM rioting in Kenosha, updates on the state investigation, and the deranged knee-jerk response of Democrats from Wisconsin governor to then-presidential candidate Joe Biden.

While we do not have all of the details yet, what we know for certain is that he is not the first Black man or person to have been shot or injured or mercilessly killed at the hands of individuals in law enforcement in our state or our country.

And we stand against excessive use of force and immediate escalation when engaging with Black Wisconsinites.

Biden, unsurprisingly, was equally irresponsible in his response:

In a statement released on Monday, Biden implored for the Kenosha Police Department officers involved in the shooting of Jacob Blake to face accountability for their actions.

“And this morning, the nation wakes up yet again with grief and outrage that yet another black American is a victim of excessive force,” he said. “This calls for an immediate, full and transparent investigation and the officers must be held accountable.”

Remember, this was before anything was even known. The full circumstances were released, and they revealed that there was no “excessive force” or racism involved.

If they had held their tongues or even (gasp!) urged their radical violent foot soldiers to stand down until the facts were known, Kenosha may not have suffered the terrible days of leftist rage. But then they know that, right? So maybe agitation was the point of their public statements?

They had it all wrong. Of course. And now the AP is reporting that the Department of Justice, under Biden no less, is not charging the police officer who shot Blake, who was wielding a knife at the time.

Federal prosecutors announced Friday that they won’t file charges against a white police officer who shot Jacob Blake in Wisconsin last year — a shooting that sparked protests that led to the deaths of two men.

Officer Rusten Sheskey shot Blake, who is Black, during a domestic disturbance in Kenosha in August 2020. The shooting left Blake paralyzed from the waist down and sparked several nights of protests, some of which turned violent. An Illinois man shot three people, killing two of them, during one of the demonstrations.

State prosecutors decided not to file charges against Sheskey earlier this year after video showed that Blake, who was wanted on a felony warrant, was armed with a knife.

The U.S. Department of Justice launched its own investigation days after the shooting. The agency announced Friday that a team of prosecutors from its Civil Rights Division and the U.S. attorney’s office in Milwaukee reviewed police reports, witness statements, dispatch logs and videos of the incident, and determined there wasn’t enough evidence to prove Sheskey used excessive force or violated Blake’s federal rights.

“Accordingly, the review of this incident has been closed without a federal prosecution,” the Justice Department said in a news release.

Surprisingly, the AP reports the actual facts of the incident.

The Justice Department’s findings dovetail with Kenosha County District Attorney Michael Graveley’s determination in January that Sheskey could successfully argue that he fired in self-defense.

Sheskey and other officers encountered Blake after they responded to a call from a woman who reported that her boyfriend wasn’t supposed to be at her home. When they arrived at the scene the woman told them that Blake was trying to her kids and her SUV.

Blake fought the officers as they tried to take him into custody. Sheskey and another officer tried to shock him with their stun guns to no avail. Blake tried to get into the SUV with his young children in the backseat, prompting Sheskey to grab his shirt. Sheskey told investigators that he was afraid Blake would drive off with the children or use them as hostages.

Graveley said video shows Blake turning toward Sheskey with a knife and made a motion toward the officer with the knife, prompting Sheskey to fire.

All that damage, all those lives and livelihoods destroyed in Kenosha . . . for no reason at all. Shame on Democrats then, and now, for dismissing, excusing, and inflaming the actual domestic terrorism of antifa and BLM while accusing concerned parents of being domestic terrorists.

They are still trying to get their pound of flesh.

Yet not for Ashli Babbitt.

These vile and despicable Dhimmi-crats predictably gin up the Dhimmi-crat mob by breathlessly rushing to judgment and alleging that the police officer’s conduct was alleged unlawful, well before facts are weighed and an investigation is completed, thus fueling the mob’s sense of alleged grievance/victimhood/outrage, when facts eventually prove the officer’s use of force to be totally legal and justified.

This is truly evil behavior, stirring up racial tensions for political gain, regardless of what the facts of the incident reveal to cooler, objective and rational minds.

It WAS NOT for no reason, don’t let them avoid this.

It was for the political benefit of Democrats.

Good point. I should have said “not for the stated reasons.” Dems don’t give a crap about Blake; they just used it to push the “defund police” narrative and for some practice riot sessions for Trump’s 2020 victory (We know the latter from Time’s report on the various plots to undermine and remove Trump at any cost).

BTW, why isn’t Gaige Grosskreutz being charged with assault with a deadly weapon? And/or attempted murder? And/or any applicable weapons charges?

Seems he’s not been charged with anything.

Criminal, but not a felon, at least not a convicted felon.

Lefty Grosskreutz was on the right side so no charges filed. See?

Surprisingly, the AP reports the actual facts of the incident.

Maybe not too surprising. Riots were useful to the Communists last year, but riots this year will reflect badly on the Biden* junta. So the Joseph Goebbels media turned off the fawning coverage, the rich plutocrats funding the Antifa/BLM terrorists cut off the flow of hate cash, and you can bet the Communists mayors and governors will crack down on even the slightest transgression from their brownshirts army.

I so hate the biased phraseology “not enough evidence to charge the officer with a crime” as if to say, well, he did the crime, but we just couldn’t find that evidence we all know is out there. This is as opposed to saying more accurately “the evidence indicated that there probably was no crime committed by the officer.” I say more accurate because at the stage of charging the crime, the standard is probable cause, the question of whether it was more likely or less likely that a crime was committed based on a preponderance of the evidence. Of course, you won’t read that headline any time soon. It would be too unbiased and informative.

Now the Crump machine is ready to crush Gregory Livingston for shooting a “blind” man just for playing loud music while black. Self defense is becoming effectively illegal.