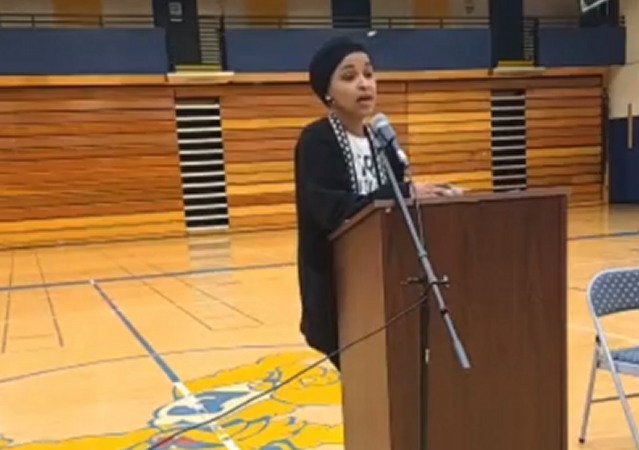 Rep. Ilhan Omar and other leftists spent months pushing the idea of defunding the police. Now crime in Minneapolis is completely out of control and who does Ilhan Omar blame? The police.

In addition to having their budgets cut in various cities, police have been demeaned and demoralized. It’s hardly fair to blame them for any of this.

This is like an arsonist blaming the fire department when a house burns down.

Rep. Ilhan Omar, D-Minn., blamed police for the recent rise in crime in Minneapolis, accusing the city’s officers of not fulfilling their oath of office.

“What we must also recognize is that the reduction in policing currently in our city and the lawlessness that is happening is due to two things,” Omar said during a town hall event Saturday in Minneapolis.

One of them, she said, is that “the police have chosen to not fulfill their oath of office and to provide the public safety they are owed to the citizens they serve.”

The lawmaker’s comments come as violent crime has surged in Minnesota over the last year, rising 17% in total while setting records for murders.

Omar’s approach to crime includes backing a Nov. 2 ballot measure to replace the entire Minneapolis police department with a “Department of Public Safety.” The measure would remove the requirement that the city have a minimum number of officers based on the city’s population.

Ilhan Omar accuses police of not fulfilling their oath of office and blames them for the rise in violent crime in Minneapolis. pic.twitter.com/3LhuOuXEff

Minneapolis has seen a rise in various crimes, particularly carjackings. See the recent report from WTTW below. Emphasis is mine:

According to the Cook County Sheriff’s Office, carjackings countywide are showing a 44% increase this year compared to the previous year.

A task force, including the Chicago Police Department, the Cook County Sheriff’s Office, the Illinois State Police and federal agencies are working together to stop the surge by sharing carjacking-related data. The goal is to track trends across the county that will help law enforcement stop carjackers. The taskforce will also use helicopters to eliminate dangerous car chases.

“[Carjackings] are horrible,” Cook County Sheriff Tom Dart said. “It’s happening all around the country—whether you are talking about Minneapolis, [their carjackings] have gone up to 500% and New York has gone up 80%. It’s difficult for all the departments, but the notion was that first thing we really need to do is to get the data and analyze who is doing the [carjacking], where [carjackings] are occurring more often and then develop strategies”

Omar has a lot of nerve to even discuss this topic.

Omar demonizing police isn't anything new, but takes real chutzpah to complain about a lack of police after openly backing defunding the police and replacing them with a public safety department. https://t.co/Dkd73aRmHF

PROGRESSIVES PLAY US ALL FOR FOOLS

It’s like defunding the hospitals and then complaining that Doctors are letting too many people die.

I guess I am a White Supremacist because logic and reason are now considered racist and so the above analogy is forbidding by the WOKE. Also question the WOKE GOD (“DEI” is Latin for God) is another act that is prohibited.

When will people wake up from the mass brainwashing ?

I mean I know you’re just being facetious, but you honestly don’t think that’s coming next?

They’re firing huge numbers of unvaccinated health care workers. Stand by for them to ‘discover’ the massive crisis of all of the operations and screenings that were pushed off for the ‘pandemic’, and ‘dramatically understaffed’ hospitals that are unable to deal with the backlog.

Nothing is by mistake.

True. They are manufacturing crises. Obama’s chief-of-staff said “don’t let a crisis go to waste”. They decided it takes too long for an organic crisis to develop – so now they create them. Mayhem is a good pretext for control measures that advantage your Party. Chaos is also good at distracting your opponents. Progressives are sneaky.

“Rep. Ilhan Omar, D-Minn., blamed police for the recent rise in crime in Minneapolis, accusing the city’s officers of not fulfilling their oath of office.”

Doesn’t get much more pathetic than that. How about her oath of office? The Constitution is, if nothing else, a document of limitation, of limiting the created government. Democrats blow it off, along with their Article VI oaths, as mere nothings, doing all they can to INCREASE the size and reach of the created government.

Too bad Democrat hypocrisy isn’t an energy source. There’s so much of it around.

Omar is either truly evil or legitimately insane. There can be no other explanation. Even gross incompetence doesn’t account for voting to eliminate police while also complaining that they aren’t doing their jobs.

I believe it is both – once you choose to be evil, it will eventually lead to insanity.

Liberals elected this monster. If only liberals were the only ones to suffer the consequences.

Omar thinks that she can abort the baby, cannibalize her profitable parts, sequester her carbon pollutants, and have her, too. She’s playing with a double-edged scalpel, but, then again, so are a woke minority. Demos-cracy is planned at The Twilight Fringe.

What’s the problem? Doesn’t everybody have private security like she does?

The very clear consequences of the d/prog policy agenda is on display for everyone to observe in real time. Whether with defund LEO or CRT or Trans ideology or vaccine mandate.

IMO, Omar and the d/prog might just be realizing that the things they take for granted; functional supply chain delivery, reliable LEO, healthcare workers among others are not staffed by a Praetorian Guard who are loyal to d/prog ideology.

The impact of even 10% of these folks going Gault in response will be felt.

Omar is a maggot.

Why wasn’t she deported? SMH

she’s a parasite–and an ignorant one at that

This is jut stupid!

She longs for the justice system back in Mogadishu, where she grew up. They don’t need any police there, and what they have are mostly corrupt. You just pay the local warlord what he wants, and all your enemies disappear.

That’s exactly what they’ll have if they get rid of the police force in Minneapolis. They’re already seeing the start of Somali-style justice as the police officers leave in droves. Before long, gangs will each control their section of the city, and as long as you give them their protection money, your store and home won’t be visited by Antifa or BLM.

There will be an occasional gang war (like in Chicago), but those problems tend to be self-limiting as the gang numbers dwindle. Minneapolis and Chicago will have gang equality and gang justice, along with gang population control.

Why not!?! If you can marry your brother, completing immigration fraud, and NOTHING happens. She just goes for it. There must be a downside to bad behavior. If none, witness: the squad.

Sod off you silly twit. Own what you’ve done before you open your mouth to criticize the results.

TOWEL HEADED foreign TRASH POS. THIS BROTHER MARRYING SCUM, SHOULD NOT BE IN MY GOV’T HOUSE! THIS FRAUDSTER should be IN JAIL for all its immigration violations…..IMO just a GOATISH SOS.

If you believe that Islam hasn’t infiltrated our government and institutions, you’re a progressive.

It was my understanding that when law enforcement become “Oath Keepers” they are joining a “far Right extremist group” and should lose their jobs.

Hmmm, she pushed the “Defund The Police” agenda with all her strength, lied on her application for immigration, and married her brother. Those sound like three reasonable and urgent reasons to Deport this ignorant twit.