I am listed among a distinguished (and diverse, did I mention diverse?) group of “frontline spokespeople.” I am not worthy! But they misspelled my name, which is a micro-aggression. 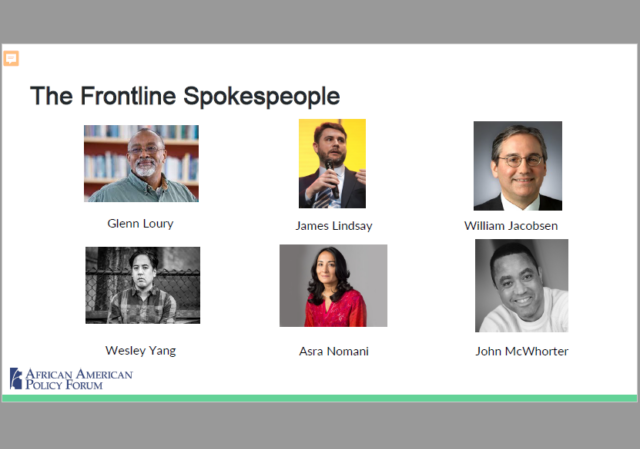 “Diversity is our strength.” If that’s the case, then the diverse group of people targeted in the strategic plan of the Critical Race Theory advocacy group African American Policy Forum (AAFP) are very strong.

AAPF is the group founded by the inventor of “intersectionality” theory and my former law school classmate, Kimberlé Crenshaw, now a law professor at UCLA and Columbia. Crenshaw also is widely attributed with coining the phrase “Critical Race Theory” and is accorded hero status among CRT proponents in academia and the media. According to AAPF’s 2019 Form 990, the group raised just under $1.3 million in 2019, and it’s almost certain that annual haul has increased substantially post George Floyd death.

Christopher Rufo obtained a strategic plan in the form of a PowerPoint created by AAPF and tweeted out some of the slides:

LMAO: The AAPF, the leading critical race theory activist organization, has created a strategic plan to mobilize left-wing media and K-12 teachers against me, @ConceptualJames, @AsraNomani, and others.

We have them on the defensive and they are flailing. pic.twitter.com/YK6KxTQ9tk

The PowerPoint in question, according to the metadata, was created by AAPF’s Director of Strategic Initiatives. It is not clear if the version of the plan tweeted is the final version. It purports to document the “infrastructure behind the war on racial justice.” That description, of course, is false, the people listed are for equality and object to the use of race by groups like AAPF as a wedge issue to turn children against each other based on skin color. 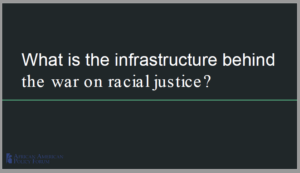 Rufo is the leading target of the plan: 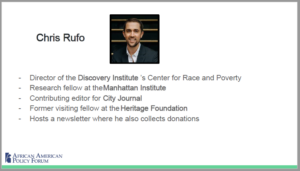 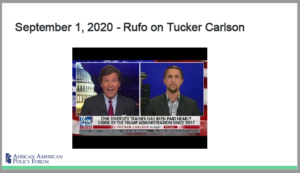 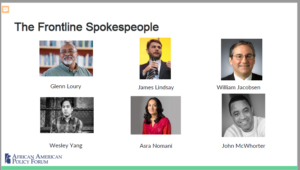 They should be celebrating our diversity!

It’s truly a work of art that the “white conservative activists” driving “fear of critical race theory” include two black guys, an Asian guy, and an Indian woman.

They misspelled my last name, which is a micro-aggression. I’ll have to file a complaint with the Bias Response Team, I feel unsafe and unwelcomed.

Legal Insurrection is listed on the “Legal Arm” slide. 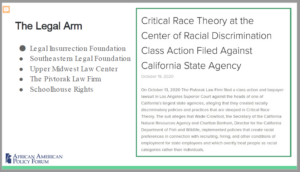 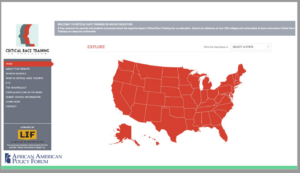 We are having an impact. Our message of equality and non-discrimination is resonating, and the CRT activists don’t know what to do.

They will tell you who they fear https://t.co/35iy7oia1c

Developing a list of enemies to be “targeted.” How enlightened of them.

An enemies list. Who do they think they are? Richard Nixon?

Communists are always the same. They develop lists of “Enemies of the people” when THEY are the real enemies of the people. They represent nobody but themselves. And they are sick and twisted people with no lives except hatred, and wanting to spread hatred among all mankind.

thank you professor and keep up the good work

The thing is, almost all black people HATE these CRT people. But, since CRT people are communists, they just USE black people as a cover. Remember the history of communism – they used “Front Groups” all the time to hide their activities. The Front groups always claimed to be in favor of something noble, but in fact were simply dirty communists seeking power by causing trouble. Lying is their middle name.

Almost all hate them? I don’t think so. Some are uncomfortable and would rather fight fairly with confidence they can do OK, but many probably like the power it gives them and weakening some competition.

Really? An enemies list? Who do these people think they are, Richard Nixon?

Great minds… I didn’t see your comment before I made mine.

That’s OK. In 1972 who could have imagined good old “Tricky Dick” would be mentioned more than once on a web page. Wait, what’s a web page?

Nixon be nimble. Nixon be quick. Nixon did not jump over the candlestick.

Which brings to mind question: who would jump over the candlestick in the first place?

Great work! Impact is being felt. New donation made this morning to Critical Race.org to support your efforts.

There. Fixed that for them.

Let them s#!t in the bed, wallow in it and watch them cry “unfair!” when we build a bigger, nicer house down the road with nice, clean sheets.

Congratulations. They fear you which means you are being effective. A great honor.

Any person who puts a French accent at the end of their first name, as a totally contrived and narcissistic affectation, is not to be taken seriously with respect to any issue.

Great job Prof. Jacobson! My family left Cuba to get away from these sociopaths. Never thought I’d see it here. Donation on the way.

Even misspelled, it’s a badge of honour!!! Well done!!!

“They misspelled my last name, which is a micro-aggression. I’ll have to file a complaint with the Bias Response Team, I feel unsafe and unwelcomed.”

They are “literally threatening the safety of you and people like you.”
Get the crybully talking points right.

“Diversity in opposition to CRT is our strength.” From James Lindsay, to Benjamin Boyce to Brett Weinstein to Jordan Peterson, to President Trump — the whole spectrum of political views are united in opposing “struggle sessions” “anti-whiteness diatribes,” and assuming that all white people are racist, by definition.

Century+old Marxist technique of committing a misdeed/sin/offense then accusing your enemy of THAT exact deed. Sad. (haha) I would be proud to be in this group. Props. Your work is yielding “truth fruit”.

I am surprised that the “enemy list” is only seven individuals. If you believe that institutions can be “racist” and that institutional racism is pervasive in America, and that every institution must be examined to rout out the institutional racism and invert the power structure so that the oppressed are placed into positions of “unearned privilege'” then the enemy list to be targeted must equal the set of all corporations incorporated in Delaware and the other 49 states.