“I would like Black kids to be completely empowered, to know that they are beautiful in their blackness, but in order to do that I don’t have to make White kids feel bad for being White” 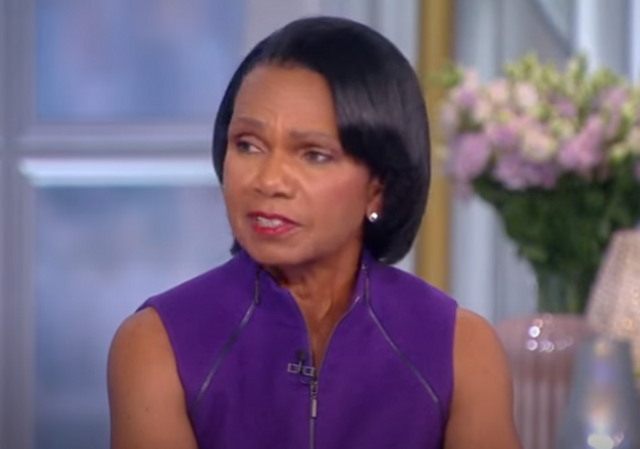 Former Secretary of State, Condoleezza Rice, appeared on ‘The View’ this week and pushed back on the leftist narrative of Critical Race Theory in education.

Rice is a very intelligent woman, but she sounds like a straight-up genius debating the likes of Joy Behar.

Whoopi Goldberg introduces the topic by noting that it has become an issue in the race for governor in Virginia. Joy Behar then quickly steps in trying to justify the teaching of CRT in schools. She claims that she was once a teacher and implies that parents don’t know how teaching works, but she does.

Joy Behar then makes another stupid point, claiming that some parents don’t want the novel ‘To Kill a Mockingbird’ taught in schools. Wrong again, Joy. It is the progressive left that wants to cancel that book.

When Condoleezza Rice is finally allowed to speak, she tells the story of growing up in the segregated south but explains that her parents always told her she could do whatever she wanted with her life.

She goes on to explain how CRT is backwards and blames innocent children for the sins of the past.

Even so, the hosts keep making the false claim that somewhere in America, people are trying to prevent slavery from being taught in schools.

Former Secretary of State Condoleezza Rice on Wednesday denounced the teaching of critical race theory (CRT) in schools, declaring that Black children could be completely empowered without making White children feel bad for their race.

During a guest host appearance on ABC’s “The View,” Rice, the first Black woman to head the State Department, cited her experience growing up in segregated Birmingham, Alabama, as she argued that young children didn’t need to be taught CRT and parents needed to have a say in their children’s education.

“I’m not certain seven-year-olds need to learn it,” Rice said as co-host Whoopi Goldberg referenced the debate over the teaching of CRT and how big a voice parents should have in the education of their children…

“My parents never thought I was going to grow up in a world without prejudice, but they also told me, ‘That’s somebody else’s problem, not yours. You’re going to overcome it and you are going to be anything you want to be,'” Rice said. “That’s the message that I think we ought to be sending to kids.”…

“I would like Black kids to be completely empowered, to know that they are beautiful in their blackness, but in order to do that I don’t have to make White kids feel bad for being White,” she said.

CRITICAL RACE THEORY TARGETED IN VA. GOV. RACE: A key debate in upcoming races has been how much of a voice parents should have in their child’s school curriculum when it comes to subjects like sex education and critical race theory — the co-hosts and @CondoleezzaRice discuss. pic.twitter.com/OGppOwLXD1

You may not be interested in ‘The View,’ but they wield real influence. This moment is a reminder that they are often wrong or misguided, while reaching a massive audience.

Maybe they should make Rice a permanent member of the panel.

Another Black Face of White Supremacy™?

Rice was the only “lady” in the group, the others are baby murdering hags.

PREMISE: Maybe they should make Rice a permanent member of the panel.

CONCLUSION: We all may hope that they do, but the producers have no intention of having that sort of articulate speaker rebutting their ‘stars’ with clear concise truths.

What happened there? Did Whoopi Goldberg actually make some sense?

That was the sound of a whoopi cushion falling down the stairs.

At work last week a woman was saying that as a child her mother would tell her that she HAS to work harder to get ahead BECAUSE she is black.

I was sitting there actually feeling sorry for her because her mother was visiting her trauma on her child (her mother probably did face very real racism in the 50’s and 60’s). Her mother made the child a victim of the mothers experience of racism.

No doubt the, now, fully gown child will visit the same victim mentality upon her children that they too are victims of racism.

Well, the mother was right. In a world where “black privilege” has been expanded to the point where people who were born with black skin can get extra “bonus points” in applying for college admissions, police jobs, government jobs, government contracts, and hordes of other categories, non-blacks develop the assumption that the average black employee was not really qualified for his position, but got it simply because his race gave him an edge. Therefore he does have to work harder, to “pay reparations” on that natural assumption.

You seem to presume every black will fail because they are black but there are plenty of very successful black women.

The View is nothing but pooled ignorance, put on display for all the world to see. People taking that slop to heart already have mush for brains.

Every time I see mention of The View, I think about the televisor “family” followed 24/7 by the apathetic sheeple in Fahrenheit 451. Though not our pre-eminent dystopian classic, 451 got a lot of things right about the future: Code Ambers, constant connectivity, 24 hour propaganda, and censorship, censorship, censorship.

But like The Daily Show, Colbert, etc. dopey suburban women watch it and form their political opinions accordingly.

You may not be interested in ‘The View,’ but they wield real influence.

On who? They are like AOC, idiots with 15 minutes only because you give it to them.
I have watched like 10 minutes total of that wretched show.

I have a friend who has been “working from home” since the start of the pandemic. At work, she usually had music playing in her office. At home, she has the tv on in the background and has been exposing herself to leftist media and tv shows for a year and a half now. I can see the changes in her attitudes over the past year. She’s always been a type-A personality and certain needs real facts to counter her opinions once formed, but she was always willing to entertain other points of view. Not anymore. The best I can say is that a year of CNN and shows like The View have brainwashed her.

The elite ignorant explaining concepts to the mass ignorant.

The harpies of “The View” can spew all kinds of nonsensical leftist shibboleths because they know their audience is composed of unthinking, ignorant sheep.

I am going to add “not interested in women who watch “The View”” to my exclusion criteria on Match.com. Combined with my other criteria, I have weened it down to 5 possible women in Portland.

Portland? I hope your criteria also include the Crocodile Dundee test.

A sea of room temperature I.Q.s.

As far as I’m concerned “The View” is a toxic waste dump and it should be put on the Superfund cleanup list.

Condoleezza Rice is orders of magnitude wiser than anyone in that group and should not lend her good name to that cesspool of humanity.

All the rest were a solute idiots

Rice is a brilliant and very articulate speaker who understands that CRT is Marxist hogwash. The panel on The View, in contrast, are woke ignoramuses

A Phi Beta Kappa, classically trained pianist, figure skater (in her youth) and a PhD in International Affairs – and yet the media tell us that Hillary (I Failed the DC Bar) Clinton is the Smartest Woman in the World.

That’s because Condoleeza won’t have them killed.

To a battle of wits against Rice, these rubes come unarmed.

The View holding influence is just another shove on our present roll off of the cliff into the abyss.

It’s right up there with any social media influencer….I can’t believe this was allowed to become a thing and be normalized. A good old fashioned and deserved asskicking (or even a socially corrective schoolyard taunting) back in the heydays would have shut down these exercises in vapid vanity.

Secretary Rice is absolutely correct. So many university Education departments have no idea of the harm that they are causing and how their “teacher training” is simply wrong.

Our society legitimately needs well trained teachers, and Whoopie is correct that “experts” should develop the overall curiculum. However, our society does not need, nor should it fund, employees in the college’s Dean of Students Office that are hired to counsel specific identity groups (and have a personal financial interest in prolonging any racial divides.) Nor is there room for diversity trainers who conduct struggle sessions for corporate managers. CRT and Wokeness is a religion, that does not offer a viable theology. There is no reason to kneel down to it and fund it so handsomely.

She is the smartest person in (almost any) room.

“Maybe they should make Rice a permanent member of the panel.”

OK, let’s not go overboard here. Sure, Condi has said and done some things I did not agree with but that is no reason to wish this horrible fate on her.

Remind me. Just exactly what is Sunny Hostin’s claim to fame?

What is this “real influence?”

On whom? And how many?