Chicago Cops Who Retire Instead of Getting Vaccine Might Lose Benefits

Chicago Cops Who Retire Instead of Getting Vaccine Might Lose Benefits

The Fraternal Order of Police gave its members language to use if they’re asked to supply vaccination status. 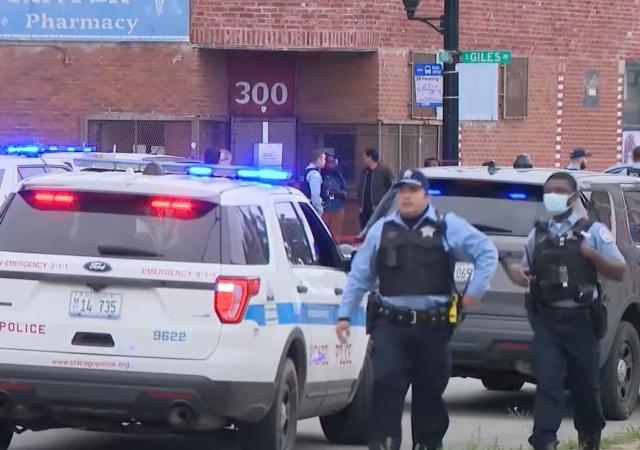 Chicago Police Superintendent David Brown threatened to deny retirement benefits to cops who choose to retire instead of complying with the COVID vaccine mandate:

On Sunday, Chicago Police brass issued a memo that threatens those who do not comply with Mayor Lori Lightfoot’s COVID-19 vaccination policy with a disciplinary investigation that could result in the termination of officers who refuse to get the vaccine — but the agency’s largest police union, the Fraternal Order of Police, in its own memo to officers maintains the order is “invalid.”

The police memo, sent Sunday night by a member of Superintendent David Brown’s office staff, also threatens officers who might choose to retire rather than get the vaccine. It says: “sworn members who retire while under disciplinary investigations may be denied retirement credentials.”

The memo continues the drama between the cops and Mayor Lori Lightfoot.

Local Fraternal Order of Police President John Catanzara cannot tell members of the union to not comply with the mandate due to a restraining order.

The FOP asked the court to tell the city it needs “to engage in arbitration over the vaccine reporting requirement” since “it’s a new condition of employment improperly imposed without collective bargaining.”

The restraining order did not stop the FOP from responding:

The FOP, in response, sent a document to its members that provides language officers can use should they be asked to go to Internal Affairs and given a direct order to report their vaccination status through the city portal, according to multiple law enforcement sources.

“Complying with this INVALID order and the violation of MY Bargaining, Constitutional and Civil Rights has furthermore caused me severe anxiety while challenging both my religious and moral beliefs. I am in fact complying with this because I am being forced to do so under complete duress and threats of termination,” the document reads.

If a supervisor gives a member a direct order then that member should “have that supervisor add their name to the FOP-provided document.” The FOP encouraged the members to keep a copy and send another to the union.

A source told The Chicago Tribune the union told members to use body cameras to record encounters.

Chicago has about 72% of its cops vaccinated, but less than 65% did not take it.

The top brass already threatened to discipline or fire cops who do not have the vaccine. Catanzara reminded Lightfoot that if she enforces the mandate the city could be without 50% of its force.

Chicago’s crime and violence are skyrocketing. Imagine the city without its full force.

Its like these fucks are determined to produce a real life Robocop movie in Chicago (Im talking about the original, not the abortion reboot).

Except they’d fire Robocop for not being vaccinated as well. 🤣

Could you please translate that sentence. If 72% are vaccinated, then approximately 28% are not. To what does the 65% refer?

Yeah, that was my question, too.

Okay, I thought it might have been a little early, and my computing skills were off. This statement makes no sense at all. 28% remain free of the shot. Where did the 65% figure come from?

Hmm.. if you go back to the article…. the numbers refer to 65% of police and 72% of firefighters…

“Fewer than 65% of Chicago cops have met the city’s vaccination reporting requirement, days after Friday’s deadline for city workers to disclose their status.

About 72% of Chicago firefighters have met the requirement set by Lightfoot as a condition of city workers’ employment.”

The way you put that has me in stitches.

Contractors to the national government are being required to report their status, including a copy of the medical record, to a third party website. It certainly seems in violation of the Privacy Act and HIPAA to me.

Since November 2020 no Democrat polity or official has been subject to any law or the Constitution. Get used to it. It will become more blatant, as will the election fraud.

It was earlier than that. Bill Clinton lied under oath, Hillary violated security statutes, etc.

The Feds say that they’ve waived HIPAA and anti-discrimination laws with respect to vaccination, so it’s now legal for employers to ask about vaccination status and fire or refuse to hire based on the answer. Seems completely ultra vires to me.

The benefits are backed by the full faith and credit of the city so probably not worth much.

Chicago has about 72% of its cops vaccinated, but less than 65% did not take it.

Maybe this is a stealth introduction to that new socially acceptable, non-racist math we have been hearing about.

you forgot to fake_carry the 1 LOL

So Chicago and by extension other blue Cities who are cash strapped can play hard ball with public sector unions? Gee I guess they can solve their underfunded pension issues and the crowd out effect on the budget without any outside assistance from the State or the Feds. No need for more taxes just play hardball with the unions.

Justice Roberts ruled the police officers were not entitled to a pension and that is was actually a tax.

Wuflu vaccines – like masks – have gone beyond obnoxious virtue signaling and are now a barbaric religious ceremony forced on us by primitive, pre-scientific theocrats.

I’m waiting for the lawyers to weigh in on this one. Doesn’t sound right to me. Please explain contract law to me.

Contract law for Democrats is akin to Darth Vader unilaterally changing the terms of his agreement with Lando Calrissian: “I am altering the deal, pray I don’t alter it any further.” Law or no, Democrats can do anything that they want without legal restriction.

Democrats learned contract law and employment law in the past as slave owners. They have passed that knowledge down.

I’m waiting for Fauci to weigh in as his word is gospel says he.

Given Chicago’s murder rate is 5x that of NYC (even with Comrade DeBlasio), if the CPD walks out, would we notice a difference?

The debate over early treatment with ivermectin and hydroxychloroquine is effectively over thanks to the Attorney General of Nebraska.

Having just read through it – must reading – 48 pages – I wish that I could give ten thumbs up for this post. Per Nebraska AG, doctors can prescribe either one with informed consent. Most of it is devoted to a very comprehensive review of their strong effectiveness FOR EARLY TREATMENT – can reduce the risk of death with HCQ by 75% (Dr. Harvey Risch, Yale, page 36).

I researched the heck out of dime a pill HCQ from the start, because my life and that of my family might have depended on it. We would likely never need $3,000 in hospital monoclonal antibody treatments or the new $700 Merck drug in most cases with a course of these 10 cent pills taken right away. Arguably, a 75% reduction in the death rate means that 500,000 people may have died unnecessarily to get rid of President Trump; we did not have to wreck our economy and country’s finances; and the education and social development of our children.