Alliance Defending Freedom: “Teachers shouldn’t be forced to promote ideologies that are harmful to their students and that they believe are false, nor should they be silenced for commenting at a public meeting.” 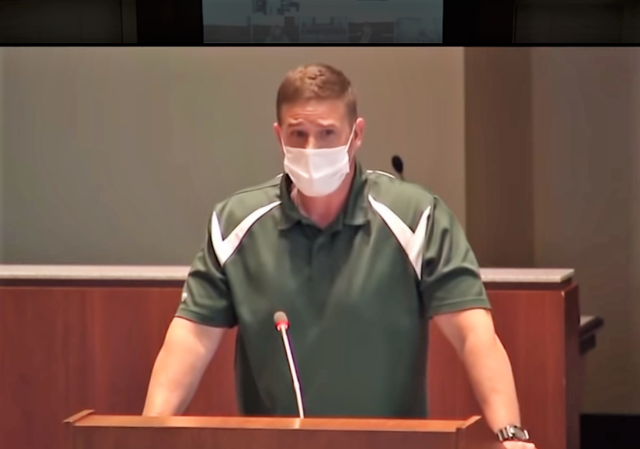 Byron “Tanner” Cross is the Loudoun County Teacher who criticized a propose “preferred pronoun” during an appearance at the school board public hearing.

“My name is Tanner Cross and I am speaking out of love for those who are suffering from gender dysphoria,” Cross told the board. He went on to discuss a “60 Minutes” special about the issue.

“’60 Minutes’ this past Sunday interviewed over 30 young people who transitioned but they felt led astray because of lack of pushback or how easy it was to make physical changes to their bodies… They are now detransitioning,” he said.

“It’s not my intention to hurt anyone, but there are certain truths that we must face when ready. We condemn school policies [that] would damage children, defile the holy image of God.

“I love all of my students but I will never lie to them regardless of the consequences. I’m a teacher but I serve God first and I will not affirm that a biological boy can be a girl and vice versa because it’s against my religion. It’s lying to a child, it’s abuse to a child, and it’s sinning against our God.”

That reinstatement was just upheld by the Virginia Supreme Court. You can read the full Order here.

The Virginia Supreme Court issued an order Monday that affirms a lower court’s decision to temporarily reinstate Leesburg Elementary School physical education teacher Tanner Cross after Loudoun County Public Schools suspended him for voicing objections to a proposed policy during the public comment period of a school board meeting. The lower court ruled that the school district’s actions were likely unconstitutional, and the state high court agreed….

“Teachers shouldn’t be forced to promote ideologies that are harmful to their students and that they believe are false, nor should they be silenced for commenting at a public meeting,” said ADF Senior Counsel Tyson Langhofer, director of the ADF Center for Academic Freedom. “The lower court’s decision was a well-reasoned application of the facts to clearly established law, as the Virginia Supreme Court found. But because Loudoun County Public Schools is now requiring all teachers and students to deny truths about what it means to be male and female and compelling them to call students by their chosen pronouns or face punishment, we have moved to amend our lawsuit to challenge that policy on behalf of multiple faculty members. Public employees cannot be forced to contradict their core beliefs just to keep a job.”

To support its ruling in Loudoun County School Board v. Cross, the Virginia Supreme Court pointed to another ADF case, Meriwether v. Hartop, in which “the Sixth Circuit emphatically held that a university professor stated viable free speech and free exercise claims based on his university’s disciplining him for refusing, based on his Christian faith, to use a student’s preferred pronouns.”

It’s a victory for now. ADF is seeking to amend the Complaint to make the reinstatement permanent.

“Preferred pronoun”!?! I think mine would be Your Highness. Silly, cubed!

If I were asked that in a classroom at some college that required it, I would reply “Master”.

And yes, I am enough of a true, trouble-making <bbastard that I would take exquisite delight if the teacher were some dreadlocked black with a Doctorate in some nonsense field.

PhDs more or less the same as a gold star stuck on a child’s forehead.

My son was suspended from middle school for defending himself when he was assaulted in a school hallway by another student in the presence of a teacher, violating the school’s “no fighting” policy. To get him reinstated immediately, I met with the principal (female) and the vice principal (male, retired military officer who was also black). When I addressed the principal as “Ms”, I was sternly corrected as she had a Doctorate in Education. I responded that was fine by me, so long as she referred to me as “Master” as I had a Master degree from a university. Her face contorted and the vice principal bit his lip to suppress laughter. When I further explained that despite the school policy, my son had the right to defend himself to minimize harm to himself and that I would retain a lawyer to bring suit against the school system and her for deprivation of his civil rights. The presence of the teacher did not prevent the assault. Waiting for intervention by the teacher exposed my son to injury if he did not respond immediately and effectively. The other student, who was the son of a LEO and had a history of aggression to other students, had punched my son and was attempting to place him in a choke hold. In response, my son broke the hold, flipped the other student to the ground, and punched the other student’s face before the teacher finally intervened.

I did not get addressed as “Master”, but my son did get the multi-day suspension lifted while the other student remained suspended. My son had no further problems at that school or later in higher school.

I have decided to have three pronouns ( anything goes , right?)

Actually, my pronouns will be
Eet,She, It

Eet is an alternative form of it and I vacillate between the two.

The word you use is your perception of thing, not the person’s who’s being referred to. He doesn’t get to say how you perceive stuff.

Reader’s Digest from the 40s. Kid locks self in bathroom, fire department called. “What’s the child’s sex?” asks the fireman. “A boy,” says the mother.

“Come out of there, little girl,” said the fireman, and the little boy marched out.

the first two are a mater of science. the third, these days, is a personal decision. choose wisely

The first two are biological facts.

A transgender remains a male or female with an unfortunate mental illness who have been brainwashed by anti science advocates in the mental health profession into believing that they are the other biological sex.

My preferred pronoun is His Supreme Royal Highness, Master of All Space, Time and Dimensions, Beloved by Friends, Feared by Foes, Who Showers His Great and Vast Wisdom on the Grateful Masses.

(Yeah – that is not a pronoun. So what? The entire “preferred pronoun” dustup is rabid insanity, so what’s a little more craziness piled on top? Go for the gold, I say!)

So in short your pronoun is TARDIS?

I’m somewhat heartened that this came out of the Virginia Supreme Court. Possibly they haven’t gotten around to packing that yet.

For “personal pronouns,” it’s hard to beat Idi Amin’s:
His Excellency, President for Life, Field Marshal Al Hadji Doctor Idi Amin Dada, VC, DSO, MC, Lord of All the Beasts of the Earth and Fishes of the Seas and Conqueror of the British Empire in Africa in General and Uganda in Particular.

Your 2nd sentence is correct…they haven’t taken over the SC, yet.

Loudoun County Public Schools!!! Why in the FUCK are these mental retards being allowed to stay in countrol of the county schools!!

Seems all these parents are going around in circles fighting single battles by themselves when they should be banding together to get rid of the fucking board full stop!!!

LCSD has a rolling election cycle which not all 8 seats come to term at one time.
In order to have majority standing, voters have to start NOW to put up candidates willing to take the challenge of changing the direction of the BOE. Parents and concerned also need to work to get out the voters which at best by history, have less than 18% of eligible voters for School Board Elections. Which might explain why so many school boards have been taken over and have been dominating the direction of policy and curriculum, A Superintendent who holds a seat is a contractual employee with the School Board. Employment may terminate prior to end of contract which can end by either party and has clauses to cover the occasions that this contract avenue is invoked prior to contract renewal date. Therefore His/Her vote is a fixed given.

As Posted at LCSD web page: “‘The Loudoun County School Board is the official policy-making body of the Loudoun County Public Schools. It operates under the laws adopted by the General Assembly of Virginia and consistent with regulations adopted by the Virginia Board of Education. School Board members are elected every four years in the November general election with one member elected for each of the eight electoral districts and one member elected at-large.”

Well, they’ve already done all that. They have a national movement with professional fundraising, soliciting people like us all across the continent, concentrated on nothing but Loudon. They’re this —> <— close to cancelling the chief troublemaker, Beth Barts.
http://fightforschools.com

We should all adopt British titles of nobility as out preferred pronouns.

My preferred pronoun? Your Imperial Majesty and Lord of Ten Thousand Years.