The seminar “aims to identify ‘best practices to reduce the harm experienced by fat LGBTQ+ patients in healthcare settings.'” 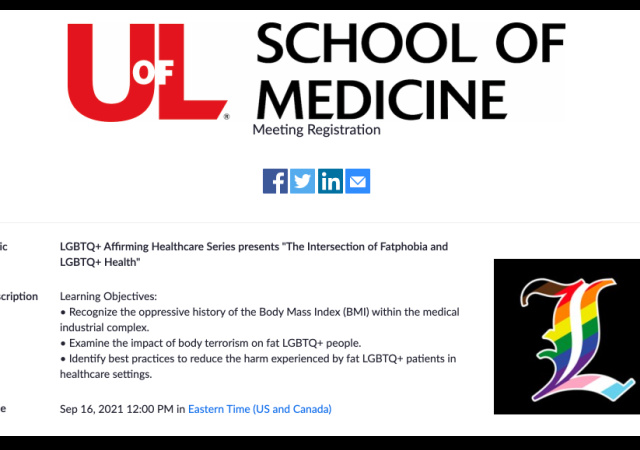 Now they’ve declared war on the Body Mass Index. You know, being fat is just as unhealthy as being super skinny.

What are future doctors learning about in med school? Well, at the University of Louisville they’re learning about “the oppressive history of the Body Mass Index (BMI) within the medical industrial complex.”

Those who sign up for Thursday’s online seminar will also discuss “the impact of body terrorism on fat LGBTQ+ people.”

The event is titled “The Intersection of Fatphobia and LGBTQ+ Health.” It aims to identify “best practices to reduce the harm experienced by fat LGBTQ+ patients in healthcare settings,” according to organizers.

Continuing education academic credits will also be offered for doctors, nurses and those in the social work and psychology fields who attend, according to the LGBTQ+ Affirming Healthcare Series’ website.

The fatphobia event will be facilitated by “Goldie (they/them),” but no last name or bio is given on the website. Upcoming topics in this series also include “An In-Depth Look at Gender Affirming Hormone Care” in October and the “Impact of Racism on LGBTQ+ Health & Healthcare” in November.

The best term I ever heard during rounds was PPP, which stands for piss poor protoplasm. It was used in reference to a PT who over the years simply never improved despite interventions out the wazzoo. Some was genetics, but a good proportion was behavioral which seemed to augment the genetic predispositions. Basically, dealt a bad hand, and then continued to play it poorly.

At times I wonder how many of these new “woke” practices are just further extensions of the movement to deprive people of power over their circumstances. Like Eric Cartman’s “I’m not fat, I’m just big boned” excuse, it allows them to wallow with no guilt. And then the rest of us get saddled with their increasing medical costs brought about my years of neglect, which has been further exaggerated by the distancing of behavior and the consequences, brought about by medical insurance coverage that isolates the two. If more people had to make the decision between a new car and getting treatment for that condition brought on by neglect, you’d start to see skinnier healthier people. As such, we are now just trending into a place where 80% of the population will have type II at some point in their lives. Anyone else notice the appearance of megabags of Halloween candy the Tuesday after labor day. Yeah, its for the kids.

I have a skeletal makeup that could support an office building. I am also obese and know it I’ve dropped about 20lbs so far this year. My plan is to be 260 at New Years.

To be fair BMI is a horrible measure. I was about 10-15 lbs over weight a few yrs back. Went to the gym and did mostly weights and some cardio, My waistsize went down, people who knew me and my doctor could see I had less fat but my BMI went up because muscle weighs more than fat and as a result I almost lost my health insurance. Had to stop doing weights and just do cardio until I dropped 10 lbs and then could go back to weights.

Is this really much more than a “bedside manner” adjustment seminar?
So patients won’t overhear staff saying stuff like, “The day nurse told me she was a dyke, but I didn’t expect the whole Hoover Dam!”