Chinese TV host on Lithuania: Beijing should “kill the chicken to frighten the monkey” 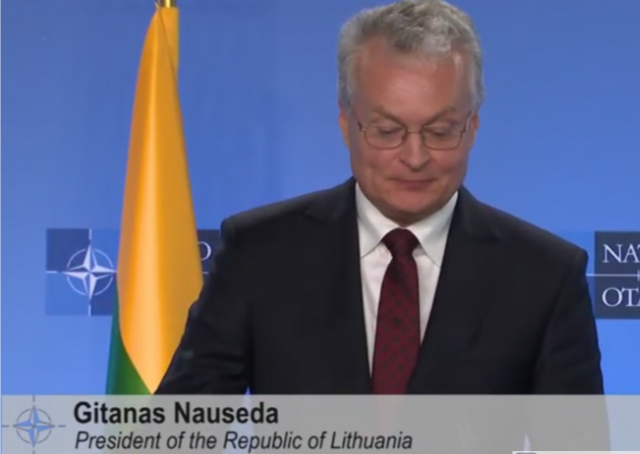 In a latest act of aggression, Communist China has launched a diplomatic war on the Baltic country of Lithuania.

The predominantly Catholic country on Europe’s northeastern edge has angered Beijing by challenging its creeping influence in the continent.

In May, Lithuania pulled out of China’s so-called “17+1” group, an instrument created by Beijing to bring former Soviet states of Eastern and Central Europe under the Chinese Communist influence.

Lithuania also ‘dared’ to deepened its economic ties with Taiwan, an indepedent island nation that the Chinese Communist Party (CCP) views as a renegade province to be unified with the Mainland.

Last month, China recalled its ambassador to Lithuania after the Baltic country allowed Taiwan to open a trade representation in its capital Vilnius. The CCP-controlled media and propagandists are calling for tougher measures against the tiny nation.

As China cranks up pressure on Lithuania, the country has urged its government officials to discard Chinese mobile phones amid fears of cyber espionage and censorship.

“Lithuania’s National Cyber Security Center said it found four major cybersecurity risks for devices made by Huawei and Xiaomi, including two relating to pre-installed apps and one involving personal data leakage, and warned against using these two brands,” the Associated Press reported on Wednesday.

“We strongly recommend that state and public institutions not use those devices and plan to initiate legislation which regulates acquiring certain devices for the ministries and various state agencies,” country’s Deputy Defense Minister Margiris Abukevicius urged.

Lithuania’s Defense Ministry recommended that consumers avoid buying Chinese mobile phones and advised people to throw away the ones they have now after a government report found the devices had built-in censorship capabilities.

The capability in Xiaomi’s Mi 10T 5G phone software had been turned off for the “European Union region”, but can be turned on remotely at any time, the Defence Ministry’s National Cyber Security Centre said in the report.

“Our recommendation is to not buy new Chinese phones, and to get rid of those already purchased as fast as reasonably possible,” Defence Deputy Minister Margiris Abukevicius told reporters in introducing the report.

With the European Union and the NATO failing to come to its aid, Lithuania is alone in facing the Communist giant. The EU, which on Tuesday demanded a formal apology from Australia for dropping France from its nuclear submarine project in favor of the U.S. and UK, has ignored China’s bullying of its member state Lithuania.

DC-based magazine Foreign Policy reported how the NATO member Lithuania fails to get any support from Western allies:

Lithuania has joined the growing list of countries around the globe that have been subject to Chinese coercion. It’s time for the trans-Atlantic partners to respond with a policy akin to NATO’s Article 5 common defense commitment. Call it “coercion against one is coercion against all.”

China has put NATO ally Lithuania in the crosshairs over that nation’s relationship with Taiwan and its challenge to China’s efforts to gain a political foothold in Central and Eastern Europe.

Lithuania’s second challenge to China was to withdraw this year from the so-called 17+1 cooperation agreement between China and Central and Eastern European countries. That informal arrangement promised Chinese infrastructure investments in the region but was increasingly used by China to maximize its diplomatic influence.

Beijing has retaliated by recalling its ambassador from Vilnius, limiting trade, and suspending rail service between the two countries. While the economic impact on Lithuania is thus far limited, diplomatically it is a wake-up call for the remaining European members of the now 16+1—and indeed for all of Europe. [September 22, 2021]

Seeing the small European nation stand up to China, the Communist establishment is urging the Communist regime to isolate the country and devastate its fragile economy.

Oh no, Lithuania is yet again exposing communists!? The horror, the horror!

Not a nation to pick fights with. It was the first Soviet-occupied country of 15 to chase out communism from their land. And they will lead the charge again against the CCP… https://t.co/7Qj27dQQff

Popular Chinese TV host Tian Liu called Lithuania “a pet” of the U.S. that deserves to be crushed by an “iron fist.” She called for an economic war on Lithuanians and “cutting them off completely.”

“Let’s teach them a lesson,” she urged. “For a small rogue country with a population of less than 3 million, an iron fist might be the best way to respond.” China should strike hard at the tiny country as a warning to other defiant nations of the world. Beijing should “kill the chicken to frighten the monkey,” the influential Chinese TV commentator demanded. (Translation courtesy MEMRI TV)

On Wednesday, Chinese Communist Party mouthpiece The Global Times branded the country an “anti-China vanguard” in Europe. An epithet meant as an insult that should actually be seen as a badge of honor if one considers how Chancellor Angela Merkel-led Germany, the leading European power, bows down to China’s dictates.

“Kill the chicken to frighten the monkey”: Chinese TV host to use “iron fist” to punish Lithuania

We should have under Trump

I F-King hate the Chinese

Me too. Tastes terrible. Much prefer Tex Mex.

China is wasting its time going after Lithuania. Xi is apoplectic and desperate now that Taiwan has applied for membership into the TPP backed by Japan and Australia (who dominate the TPP).

Xi never applied for Chinese membership believing in his arrogance that the TPP would eventually come to him and offer that membership. Never happened. Then Xi applied for membership and was rejected. This is a very big deal for China and very bad for Xi who is now has good reason to fear that the PLA, with whom he has been at war with, will soon depose him.

Maybe Xi fears Lithuania is a signal that even the small countries are now emboldened to disentangle themselves from China and wants to nip that in the bud.

The gates of hell are quickly opening up before Xi these days and his decision to destroy China’s economy while alienating everyone on the planet is the main reason why.

BTW, Australia is also now threatening to collapse China’s economy by cutting off their iron ore and coal exports entirely. China currently depends on Australia for about 80% of its coal imports and a very sizable chunk of their iron ore. China is a house of cards imploding.

The EverGrande collapse isn’t even the biggest crisis they are faced with. Their fast-expanding power shortages are only going to get worst and they are targeting their shut downs on the foreign-funded industries who do most of the import-export business. What a mess. It’s all over for China.

/wait! Does this mean no more Buick Envisions?

Probably. China has been dumping steel onto the global market at government-subsidized prices. The steel glut is already over since the steel plants due to the power cut-backs (for one thing) that have been targeted largely to industries that manufacture for export (like Buick). Doesn’t matter to me. I prefer the Toyota 4Runner which I will be buying at some point next year.

Yes, but Austrailia has committed suicide in three ways:

1-they are destroying their own population and future with tyranny in the name of the a disease manufatured by the Chinese with American money funneled to the ChiComms by Anothony Fauci.

2-Dumping France’s antiquated diesel subs in exchange for US nuke subs was a smart move. BUT….they ain’t getting ANY subs for 20 years.

3-They elected morons to lead their nation into problems 1 and 2.

But then, we ‘elected’ Clinton twice, Obama twice and Biden/Harris.

The only country committing suicide is China, Australia will be fine. As will happen in the US, those imposing Marxism on us will soon be purged from the system. China’s tentacles are being clipped everywhere.

There surely will be a recession as we all rebuild the supply chains and rework our alliances. The world understands that we hold all of the strong cards in the global economy and they will need our help to extract themselves from China successfully. We are in a great negotiating position right now but a big part of succeeding will be our willingness to suffer the economic consequences for a while.

It’s like I’ve been saying for years, there is going to be a lot of shit to eat when this is over but we don’t have to be the ones eating most of it. Right now, China is positioning itself to be the one eating most of it and the EU will probably eat most of the rest. Russia has been positioning itself for China to fail for months now (rescinded their “One China” policy last month) so they will probably be okay relative to the EU.

It’s mind-blowing what is going on in China right now. It’s Chairman Mao all over again only this time, it won’t be as easy to kill as many Chinese as it was under Mao. Mao controlled the PLA. Xi is at risk of being deposed by the PLA (it’s their part of the economy that Xi is obliterating).

China is going to find Lithuania to be a tough little mongoose. Lithuania, Latvia, and Estonia repeatedly chucked the finger at Soviet Russia for decades, and made it stick.

“kill the chicken to frighten the monkey”

More like yell at the chicken, then go home and spank the monkey.

That’s probably inscribed on a plaque on Hunter Biden’s wall.

Or on Kamala Harris’ garter belt.

Close. I was thinking “choke the chicken to spank the monkey.”

This set of remarks reminds me of what one reads in the comments at Gateway Pundit.

This is the kind of hanging curve ball that you usually hit out of the park. Where were you?

One of the nicest, but toughest friends I ever had from medical school was a Lithuanian emigre whose parents had fled Nazi persecution. He is just a great guy and that kind of friend that was always there for you. One night when I was working at a restaurant bussing tables, he came in and had dinner and noticed that one table of tough guys were making fun of the staff being “sp*cs” (it was Texas in late 60s). He went over to their table and asked them to stop. They didn’t. I was corralling a bunch of dirty dishes and taking them back to the kitchen when I heard this loud crash and rushed back into the dining room. He had cleaned their clocks and the manager threw them out. The manager also comped his dinner and asked him if he wanted a job. He was working there the next night as our cashier and night bouncer. We still laugh about it when we talk. Alas, he is getting old as all of us are, but I still remember him just nonchalantly wiping the floor with a bunch of Texas roughnecks who thought a young Lithuanian Jewish man wouldn’t be much of a challenge.