“Right now, the latest national polls have Biden’s job approval among independents in the low 40s. If that number dips into the high 30s, it spells trouble ahead” 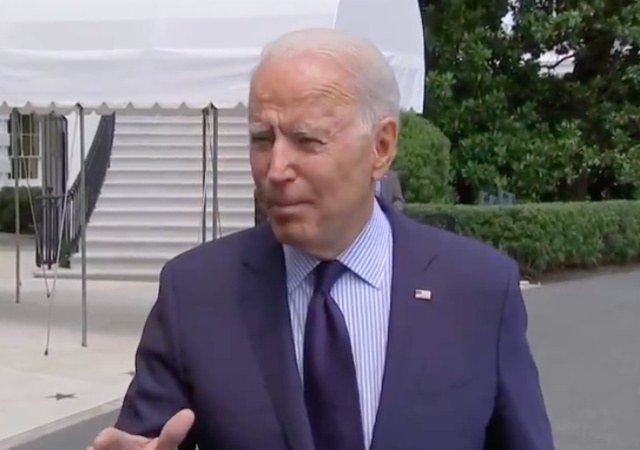 When thinking and writing about politics, we often focus on the left and the right. However, the people who fall somewhere in between are often more important in elections.

The 2022 midterms are still quite a way off. but Biden is not polling well with independent voters. If that trend continues, it could be very bad news for Democrats.

Independents cooling on Biden spells trouble for Democrats in 2022

Biden’s surprisingly steady approval ratings are starting to crater, though his disapproval numbers have consistently climbed during the first six months of his administration. That is a foreboding trend for Democrats before the 2022 midterm elections when the party is clinging onto power with slim majorities in the House and Senate.

Barely half of the country approves of Biden’s job as president, his lowest average rating since his January inauguration, according to FiveThirtyEight. That number is down from a 55% high in March. While that may not be a dramatic drop, it means Biden is not infallible to the drumbeat of time or shifts in political currents.

Simultaneously, more than two-fifths of the country disapproves of Biden, according to FiveThirtyEight, compared to slightly more than a third who held the same opinion in February…

The 2022 midterm election cycle will be determined by voter turnout, similar to elections before it. But for Paleologos, the contests and Biden’s waning popularity will also hinge on independent voters. Biden’s ploy to appeal to them with bipartisanship does not appear to be working.

“Right now, the latest national polls have Biden’s job approval among independents in the low 40s. If that number dips into the high 30s, it spells trouble ahead,” Suffolk University Political Research Center’s director said.

Eli Yokley of Morning Consult has more on this:

Biden Has a Growing Problem With Independents

President Joe Biden’s standing among independent voters on the pandemic and the economy has taken a hit in recent weeks amid a surge in COVID-19 cases and rising inflation, according to new Morning Consult/Politico polling.

It appears to be weakening Biden’s general reputation among unaffiliated voters, who helped Democrats secure full control of the White House and both chambers of Congress this year, exposing an early problem for his party to remedy with 14 months to go until the midterm elections.

According to a July 31-Aug. 2 poll, 44 percent of independent voters approve of Biden and 49 percent disapprove. Since April, the president’s net approval rating (the share who approve minus the share who disapprove) has dropped 18 percentage points among unaffiliated voters – a slow but consistent decline that is weighing on his overall numbers as Democrats express urgency regarding efforts to more aggressively sell the president’s successes and his agenda.

This is a major point:

Independent voters, like the overall electorate, are still more likely than not to express positive views about Biden’s handling of the pandemic despite the recent surge in cases. But the economy is a different story: Unaffiliated voters are pessimistic about its future trajectory and largely blame Biden for the 13-year high in inflation, with immigration — another regular line of attack for Republicans — being the lone topic on which his handling is more disliked.

Dissatisfaction with the party in power among independents is the key to changing who controls the House and Senate. If Biden doesn’t change course on immigration and the economy, his party will be punished by voters in 2022.

Biden is not polling well with independent voters

A senile mumbling idiot with a known history of pedophilic behavior, a history of insane political corruption, with such low morals that he agreed to be the face of the one and biggest fraud in the history of American politics.
Nah.
Can’t be.
I’m sure people love him.

Hey, what’s not to approve?

Watch: Lost Biden Wanders Onto Grass Even After Secret Service Handler Points Where to Walk

Doesn’t matter one freaking bit if the RINOs continue to refuse to do anything to secure elections.

Correct. However the state and federal legislative members who represent someone are more likely to act in accordance with the policy preferences of their constituents when those same constituents are vocal.

Politicians are people pleasers. They respond when a poll shows 55% of the likely voters in their constituency are likely to vote their ass out of office.

Until your legislative members and your Governor believe that they will lose an election over an issue they will not be sufficiently motivated.

If our political leaders are not motivated then that says more about us and our priorities than them.

I agree we’re being shown the RINO’S, most Repubs are nothing more than the SAME COIN JUST THE OTHER SIDE, 3RD party like Libertarians, Independents can participate in our government! THIS TWO-PARTY THING TODAY IS ‘ONLY A PARTY’ NO BUSINESS FOR THE PEOPLE BEING DONE!

Let’s be realistic.
Joe Biden never had the numbers. Any poll to that effect is also a fraud.
He is only sitting in the White House because there was massive fraud. We all know it. The evidence is there and it is overwhelming.
The problem is that the system has become extremely corrupt from top to bottom, so nothing will be done about it.

Trump won the election, but that doesn’t matter anymore.

Will they? Now that a far larger audience is aware of the mechanics involved more people are paying attention.
It won’t be an under the radar issue now, they will have to update the playbook.

I’m a little confused about what I can do. There are some large Democrat counties in my state that cheat like crazy in my opinion and the government officials won’t fix the problem.

Worry about your County first. Fix it. Then work to pressure your legislative members to advance reform legislation at the State level. Work to elect reform minded candidates if the current group doesn’t measure up.

Create a nd build a local coalition of people. Heck, the CRT/Equity fight at the local school board has plenty of people who very likely agree with you about election reform as well. Reach out and network.

In essence if the local political party leadership isn’t leading then you need to create and maintain a true grassroots coalition. Very hard. Very demanding. That’s what this will take. We are either willing to do the work or we are just running our mouths. Simple as that.

we have to email, write, call AND physically show up with MEGAPHONES to offices of elected officials especially the election officials, let them know we WILL SCRUTINIZE EVERYTHING THING THEY’RE DOING!

He has a problem with anything independent.

In all seriousness Joe Biden’s problem is dementia. The democrat’s problem is what to do about it. And it’s not a secret. The whole world knows about it.

If anyone thinks a candidate in PA can get 700,000 votes in an instant when the counting room was “closed for the night”, they are insane. No one but Dominion voted for this senile liar.

The Democrat solution will be to either cancel the 2022 [and beyond] elections and/or to cheat either covertly or blatantly. After all, what evidence is there that anything will be done about it even if they openly caught in the act?

Every time I read that “half of the country approves of Biden’s job as president”, and even were it only a 30%, I’d like to ask the responder: what does he make right, exactly? Between a lid and the next, I mean? Really, you might be crazy enough to approve of his team’s job, but him personally?

This comment could not have A CLEARER JUXTAPOSITION OF TRUMP N BIDEN!!! People used TWEETS to REPLACE TRUMP, and were his tweets LIES? Biden is SENILE! God Help anyone who chose BIDEN BECAUSE OF TWEETS to replace Trump!!They have to be as SENILE as Biden then!

And not even the ides of August yet. Aren’t you glad you live in such a backward part of the country? I am.
.

Yes. And it’s 5% black. Most of those are students or at the VA. In short: just like the rest of us but with extra melanin.

WOW! JUST TERRIBLE WOW! Thank you all who put SENILE Grandpa into the oval office, VP who laid her way to power, & witch of the West speaker House of Rep. AND inept Senate+ Repubs who ARE IMPOTENT+POWERLESS. Thanks a lot! IS THIS CURRENT DEMOCRATS SAMES AS THE ORIGINAL DEMOCRATIC OF AS THE 40-50-60-70’S,?? NOW THEY ARE “AMERICA, LAND OF “COME TAKE ALL YOU WANT IT’S FREE!!” THE GIVE-AWAY PARTY! Do they govern as the founding fathers intended?

I am appalled that close to half of the country approves of Biden’s handling of anything, including the virus. What kind of ignorant morons now populate this country anyway???

Low 40’s with independents? So there are still 40% or better of independents who love abortion, transing kids, inflation, high energy prices, and begging the Taliban to go easy on our embassy?