G7 foreign ministers: “All available evidence clearly points to Iran. There is no justification for this attack.” 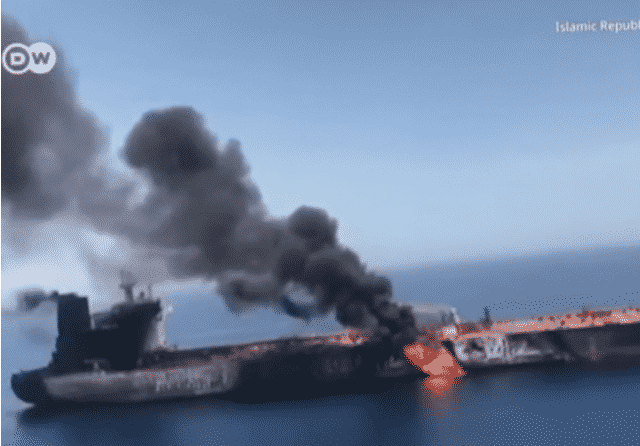 The foreign ministers from the G7 countries, which include France, Germany, Italy, Japan, the UK, the U.S. and the EU, called Iran’s actions a threat to world peace.

All evidence shows that Tehran was behind the suicide drone strike on the tanker that killed two European crew members off the coast of Oman, the G7 said in a statement on Friday.

The strong response from the G7 member states comes after UK Prime Minister Boris Johnson demanded tough action against Iran. “Iran should face up to the consequences of what they’ve done,” Johnson said last week. “This was clearly an unacceptable and outrageous attack on commercial shipping.”

This is the second Iranian attack of its kind in recent months. In March, another Israeli-owned ship passing though the Gulf of Oman was hit by an explosion, likely caused by a sea mine or missile.

The Reuters reported G7 nations’ response to the Iranian terror in international waters:

Foreign ministers from the Group of Seven wealthy economies said Iran was threatening international peace and security and that all available evidence showed it was behind an attack on the Mercer Street tanker last week.

“All available evidence clearly points to Iran. There is no justification for this attack,” said the statement, issued by current G7 chair, Britain.

“We call on Iran to stop all activities inconsistent with relevant UN Security Council resolutions, and call on all parties to play a constructive role in fostering regional stability and peace.”

Britain raised the issue at a closed-door meeting of the United Nations Security Council on Friday. No action is expected to be taken by the 15-member body.

Iran has repeatedly denied any involvement in the attack, but the forensic evidence and intelligence clearly points towards the regime’s military arm, the Islamic Revolutionary Guard Corps (IRGC).

From the drone fragments recovered from the damaged ship, the U.S. military concluded that the strike was carried out by Iran-made Shahed-139 combat UAV. The Israeli-owned vessel was struck by multiple explosive-laden suicide drones.

On Friday, the Associated Press reported the evidence gathered by the U.S. and Britain:

The U.S. Central Command said it had collected and analyzed substantial evidence that the July 29 attack on the HV Mercer Street in international waters in the Arabian Sea off the coast of Oman that killed two people was carried out by an Iranian drone loaded with a military-grade explosive.

“U.S. experts concluded based on the evidence that this UAV was produced in Iran,” it said, using the military term for an “unmanned aerial vehicle.”

Britain’s U.N. Ambassador Barbara Woodward identified the drone as a Shahed-136 UAV, telling reporters after the U.N. Security Council discussed the tanker attack behind closed doors that “these are manufactured only in Iran.”

The IRGC, together with Iran’s proxy terrorist groups, has perfected the use of armed drones in its terror campaign against oil-rich neighboring Arab Gulf countries. In September 2019, Yemen-based Houthi terrorist group, Ansar Allah, used Iran-supplied drones to stage a devastating strike on Saudi oil facilities, disrupting half of the country’s oil production and crippling global supply.

While the recent Iranian attacks near the Strait of Hormuz have been aimed at Israeli-owned ships, the regime’s growing aggression poses a major threat to global economies still reeling from the aftereffects of the Wuhan coronavirus pandemic. The strategically located Strait of Hormuz, which runs between Iran and the Arabian peninsula, forms a narrow waterway where ships carry one-third of the world’s oil supply.

I think we all know that it’s the US left that doesn’t get it.

YET BIDEN PUTS DEAL WITH IRAN A TOP OF HIS AGENDA

Israel can thank Liberal Jews in the USA for electing a President that will do more to create an existential threat to Israel and thereby more harm to Jews than any single person or entity in Israel’s history.

With friends like Biden and the liberal Jews who helped elect him – can Israel really survive ?

Destruction of Israel is just a small price to pay for removing the Orange Man and his mean tweets. Thank G-d we don’t have to be offended by those tweets and the media headlines telling us how incompetent DT is. It’s so much better to have a semi-senile President who can muster about 4 hours of real work per day. But at least we get nice headlines now. Thankfully, we don’t have to hear about the border or “kids in cages” (because media will not report about the crisis on the border while a Dem is in office nor about the cages children are in now). Yeah, let’s always elect Dems because then we don’t have to hear about the messy real world – the media will just report what we want to hear – which is how everything is all the fault of the Orange Man. Now, if only my Israeli friends would stop sending me messages about how much they prefer Trump to Biden and all those scary messages about the doomsday scenarios. Yeah, Jews are so dramatic. I mean, we all know the holocaust could never happen again, right?

Keep posing and before much longer Israel will fix it so you won’t be able pose any more.

Somehow, I doubt it. Sorry, I just don’t think it will happen.

That’s the same thing Hamas thought a couple of months ago. Just before they got their ass kicked.

That’s what all the grizzlies say while sitting on a rock waiting for their next meal to pass by.

Condemnation is great, but only if it comes with massive retaliation, severe enough that Iran is crippled and cowered.