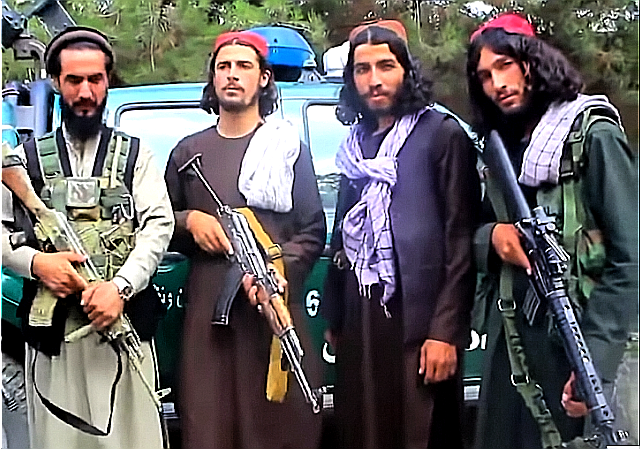 With the Taliban’s near-total victory in Afghanistan, India fears the resurgence of Islamic terrorism in the country. New Delhi is particularly alarmed by the close operational ties between the Taliban and jihadi groups operating in the Muslim-majority Indian province of Kashmir.

“For years, anti-India militant groups like Lashkar-e-Taiba and Jaish-e-Mohammad have been operating from their bases and training camps in Afghanistan-Pakistan border region to launch attacks against targets in India,” German broadcaster Deutsche Welle noted this week. These Pakistan-backed terrorist groups have waged a deadly jihad against the Hindu-majority country. The outfits have killed more than 40,000 in India in the past 30 years.

Geopolitical analysts share New Delhi’s anxieties. “A study by French think-tank Centre d’analyse du terrorisme (Centre for Analysis of Terrorism) published last week warned of the renewed possibility of “more operational coordination between Pakistan-supported groups like the Lashkar e Toiba and JeM [Jaish-e-Mohammed] (on the one hand) and the Taliban,”” the New Delhi Television (NDTV) reported on Tuesday.

Pakistan, particularly its military establishment, has been instrumental in forming the Taliban and various other jihadi terrorists groups currently operating in the region.

Many international terrorist groups and operatives have found haven in Pakistan. Osama bin Laden took refuge in the country when U.S. troops entered Afghanistan and hid just half a mile from Pakistan’s top military academy when a team of Navy Seals eliminated him in May 2011.

The news network France 24 reported the triumphal mood in Islamabad:

“Islamabad’s reaction to the Taliban’s victory was the opposite of the despair in Western capitals: Their triumph showed that Afghans had “broken the shackles of slavery”, Pakistani Prime Minister Imran Khan asserted.

Khan’s special assistant Raoof Hasan framed the fall of Kabul – for many, a moment encapsulated by footage of hundreds of Afghans running alongside a departing US plane, desperately trying to flee – as a “virtually smooth shifting of power from the corrupt Afghan government to the Taliban”.

Perhaps most tellingly, Pakistani Climate Minister Zartaj Gul Wazir singled out the country’s perennial antagonist India as the audience for her delight, in a subsequently deleted tweet: “India gets an appropriate gift for its Independence Day”.

India, which assisted the Northern Alliance forces in its struggle against the previous Taliban rule, had invested heavily in rebuilding the country under the now-deposed Afghan government. “Since 2001 India has spent a non-trivial $3bn or so to bolster the American-installed regime. It built roads, dams, power lines, clinics and schools across the country. It trained Afghan officers, including women, in its military academies. It gave scholarships to thousands,” British weekly The Economist remarked in this week’s addition. The fall of the Afghan government was a “humiliation for India” and a “victory for Pakistan,” the magazine concluded.

India has bitter memories of the previous Taliban stint in power from 1996 to 2001 and the group’s links to Pakistan.

An Indian Airlines plane was hijacked in 1999 and ultimately landed in Kandahar in southern Afghanistan. New Delhi freed three senior Pakistani militants in its jails in exchange for the return of the passengers and the Taliban allowed the hijackers and the released prisoners to go to Pakistan.

“On Wednesday and Thursday, Taliban insurgents searched Indian consulates in Kandahar and Mazar-e-Sharif, sources said, adding that this can pose a grave security threat. The Taliban, it is learnt, have also searched the Indian consulate in Herat, which was shut down last year,” Indian news website The Print reported this week.

In contrast, China appears to be enjoying the protection of the news Islamist masters in Kabul. “The Chinese embassy in Afghanistan is continuing to operate as normal, and its ambassador and embassy staff will remain in their posts,” Foreign Ministry spokesperson Hua Chunying confirmed last week.

India fears that its 200 million-strong Muslim population could be susceptible to the calls of jihad being raised in the neighborhood. The Afghan Taliban have their ideological roots in India. Taliban, which means students in Arabic, came out of the Deobandi madrasa movement — named after an Islamic Seminary near the Indian capital New Delhi.

In the wake of the Afghan crisis, the German state broadcaster Deutsche Welle accused Prime Minister Narendra Modi of discriminating against Muslim asylum seekers. The Indian government had made special provisions to evacuate Afghanistan’s remaining Hindu and Sikh populations, which bore the brunt of Taliban repression during their previous reign. “Early last week, India completed the evacuation of some 170 diplomats and other staff members from Afghanistan, and since then, there have been special flights evacuating Indians and Afghan Sikhs and Hindus,” a German broadcaster reported on Monday.

New Delhi, particularly Prime Minister Modi’s right-wing government, sees India as one of the biggest jihad and international terrorism victims. However, it has failed to take a consistent stand on the issue.

Now what are YOU going to do about it.

“India, which assisted the Northern Alliance forces in its struggle against the previous Taliban rule, had invested heavily in rebuilding the country under the now-deposed Afghan government. “Since 2001 India has spent a non-trivial $3bn or so to bolster the American-installed regime. It built roads, dams, power lines, clinics and schools across the country. It trained Afghan officers, including women, in its military academies. It gave scholarships to thousand”

Is this a joke? 3 billion over 20 years? That’s 0.1% of their GDP for a single year. And most of it went to ‘infrastructure’ and training Afghan officers that went back and enabled the corrupt incompetent mess.

Gosh, if you’re worried about terrorism maybe you’re going to actually have to to something meaningful to stop it, then!

“had invested heavily in rebuilding the country under the now-deposed Afghan government.”

It is time return Afghanistan to their original condition.

Are you happy, Soros? You set the stage for World War.

Oh noes! Not political unrest that would threaten the profitability of Google, Twitter and Facebook, who would then have to hire actual Americans to man their customer service telephones!
I sense a great disturbance in the Force… as if dozens of Silicon Valley billionaires suddenly cried out in terror, and were suddenly silenced.
Help us, Obi-Wan Joe — you’re our only hope!

These decades-long attempts by successive U.S. presidential administrations to turn Pakistan into an ally have clearly failed. The pathologies of the supremacist, totalitarian and belligerent ideology of “Submission” inevitably corrupt any society and country in which it is dominant. It’s long past time to add Pakistan to the list of rogue states and terrorism sponsors and to treat it as the enemy that it clearly is.

Don’t worry, India. Joe Biden has your back – he gave the Taliban a gun to point at it.

Maybe you should just put am Interpol warrant out right now for arrest of the enablers of the coming carnage — Biden and Harris.