“Hamas chooses popular markets as a safe place for its ammunition warehouses because it knows that Israel does not target such places.” 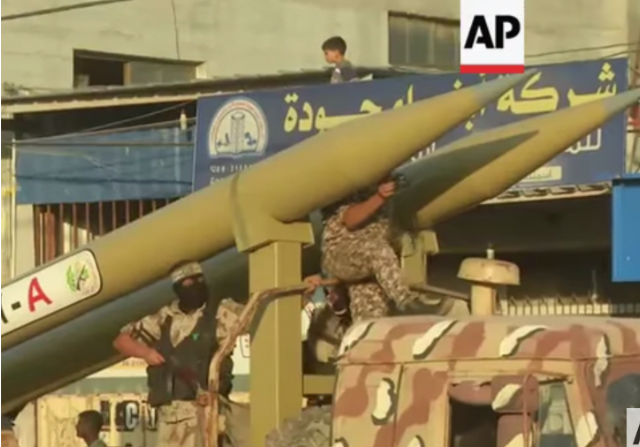 In a rare show of defiance, the Palestinian NGO Network, an umbrella group of 133 organizations, demanded a probe into the Gaza-based jihadi group’s use of civilian areas for hiding its weapons cache. “Anger at the Hamas terrorist group that runs the Gaza Strip – and other Islamists active in the enclave – bubbled over, as Palestinian factions and human rights organizations called for the cessation of weapons storage in residential areas,” Israeli TV network i24News reported.

The Palestinian demand came after the July 22 blast at the al-Zawiya market, killing one civilian and injuring 14 others. According to the Palestinian groups, the explosion took place in a Hamas weapons depot located inside the market.

The Jerusalem Post reported the Palestinian demand for a probe into Hamas’s reckless activities :

Palestinian factions and human rights organizations have called on Hamas and other Palestinian terror groups to stop storing weapons in residential areas following another explosion, which killed one person and injured 14 others on Thursday.

They also demanded a thorough investigation into the explosion in order to hold those responsible accountable.

Palestinians in the Gaza Strip said that the explosion took place in a warehouse used by Hamas for storing weapons.

Hamas said it has launched an investigation, but has not provided any details.

Thursday’s explosion occurred shortly after 8 a.m. in a house located in the Al-Zawiya market area in the center of Gaza City. Palestinian sources said that 69-year-old Atta Ahmed Saqallah died and 14 civilians were injured, including six children. (…)

The Palestinian NGO Network, an umbrella organization comprising 133 member organizations, also called for a “serious and transparent” investigation into the explosion.

“The Network stresses the need to expedite the provision of all forms of assistance and support to those affected,” the group said. “It also stresses the need to announce the results of the investigation and to take serious measures to prevent such explosions from happening again.”

Palestinian writer Fadel Al-Manasfeh said it was clear that Hamas chooses popular markets as a safe place for its ammunition warehouses because it knows that Israel does not target such places. He said that Hamas was “confused” by the explosion because one of its weapons warehouses had been discovered. He also pointed out that a similar explosion took place in an open market in the Nuseirat refugee camp last year, killing more than 10 Palestinians and injuring dozens others.

The use of residential areas for terrorist activities is part of Hamas’ tactic of shielding its infrastructure and combatants from Israeli strikes and maximizing Palestinian civilian casualties in case of a conflict. Hamas, Hezbollah, and other Palestinian terrorist groups frequently use homes, schools, and even mosques as weapon depots and rocket launch sites.

According to Hamas’ claims, more than 300 miles of undergrounds terror tunnels crisscross Gaza — often dug underneath schools and homes.

The Palestinian terrorist groups show the same disregard for Gazan lives when they wage rocket offensives against Israeli civilians. Out of some 4,500 rockets fired by Hamas and allied terrorist groups during the Gaza hostilities two months ago, some 680 misfired and landed within Gaza. They were responsible for over a third of the reported Palestinian casualties during the conflict, data analysis shows.

“Hamas In Their Own Words”

I am shocked, shocked I tell you to hear of this.

If you think Gaza is bad, just wait till Lebanon.

In other news, the sky was confirmed to be blue and water has been scientifically proven to be wet.

If these people were smart, they would end all hostilities, beg forgiveness, riding Israel’s economic coattails, for the good of their children.

But they are not smart.

Good morning. As they say in Hebrew, גילו את אמריקה — they have discovered America.

Israel cares vastly more about the lives and safety of Palestinians than their own leaders do. And it’s not even close.