The ordinance forbids “temporary shelters within 500 feet of schools, daycare facilities, libraries and other locations throughout the city of Los Angeles.” 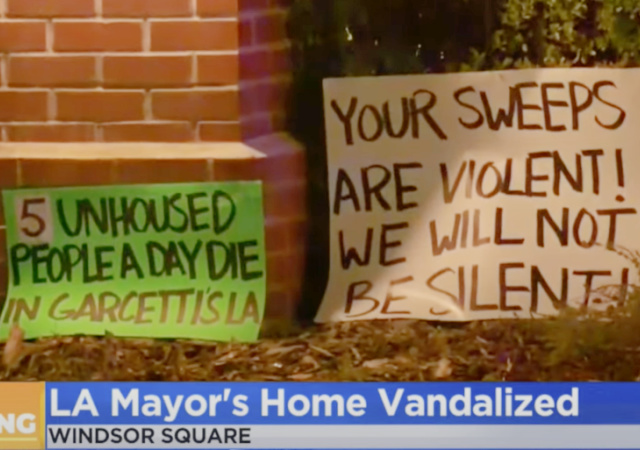 A crowd of about 50 people began protesting at the residence at about 7:30 p.m. Thursday, according to the LAPD. The protest started peacefully, but ended with dozens of officers responding in riot gear dispersing the crowd.

“No one was in danger. Our role last night was to facilitate a peaceful protest and make sure that everyone’s First Amendment rights were protected,” LAPD Lt. Rex Ingram said. “Unfortunately around midnight, they were a little bit loud and boisterous, and were getting a little out of hand, and that’s why we decided to give them a dispersal order.”

People held signs saying, “5 Unhoused People A Day Die in Garcettis [sic] LA” and “Your Sweeps Are Violent! We Will Not Be Silent!”

Los Angeles County has seen a sharp rise in homeless encampments for years. Tensions have boiled over this year since the encampments made Venice Beach dangerous.

The tents also drain money from the city.

The new ordinance forbids “temporary shelters within 500 feet of schools, daycare facilities, libraries and other locations throughout the city of Los Angeles.”

Also, on Thursday, a video emerged of a fight between three homeless men on the Venice Beach Boardwalk. One man took a large pole towards a man who exchanged “punches with a third man.”

Homeless fights are not new on the boardwalk:

Merchant said that fights like this happen all too often and that the homelessness crisis has taken a major toll on local businesses.

“With the restaurant being open until 9 or 10 o’clock, people are scared to come to the boardwalk past a certain time,” Merchant said.

The video does show Los Angeles Police Department officers nearby. However, it doesn’t appear that men involved in the violence were detained and calls to LAPD regarding the Wednesday incident were not immediately returned.

You tell these people no laws apply then out of the blue they do? You didn’t see this coming?

Republicans need to get their Sh!t together

But I did speak to a German reporter, must say I did very well

“Republicans need to get their Sh!t together….”

It will NEVER happen. The GOP is infested to the core with swamp garbage. Abandon all hope, until we form a new party.

Those five that die each day are not dying of hunger and exposure. They are dying of other things like drug overdose. Limit the encampments so there is not a community of drug users who attract drug salespersons and get the mentally ill and drug addicted into treatment.

Drug treatment for not works if you want it

Many don’t want it

Well that didn’t make any sense

I wrote if the druggie doesn’t want help it absolutely won’t work.

Right on about the drug sales. As a cop, we found that nothing attracts crime like drug dealing.

Case in point: The day before the shooting outside Nationals Park, a 6-year old girl was shot and killed and her mother wounded at a DC intersection that is surrounded by liquor stores. A few days ago someone was arrested for her murder. The kicker was that 12 other people were arrested for intention of distributing narcotics, and one of them was the girl’s own father, who was also wounded but released from the hospital straight into police custody the next day and the police kept it quiet.

In California, addicts get 1,000 dollars per month in disabilty payments – their disabilty being they are addicts!

There are about 3,000 street addicts getting 1,000 per month, every month. That means on the first of every month, 3,000,000 dollars in CASH hits the streets to buy drugs. The CA street gangs are at war with each other over territory selling dope to the cash-enabled street addicts.

This is Newsom’s California.

I need stock in Orville Redenbacher

More likely in Sig Sauer. There will soon be crop shortages, like other mysterious ‘shortages’ popping up since the coup against Trump.

People you could help are about 10%.

and they will blame white capitalists of course

Build a huge camp out in the desert surrounded by barbed wire and armed guard. Those who violate vagrancy law can be sentenced to live in these homeless camps.

Require people receiving government assistance to have a residency and not homeless.

There are a lot of good poor people trapped in these horrible cities. I think we need to open up some federal lands and have a new land rush for those who want to escape these inner-cities.

The people who left to populate the frontier were neither the citified nor the indigent the first time around, don’t expect it this time.

[Horace] Greeley, interestingly, was a bit tepid on taking his own advice. He did make a grand tour in 1859, visiting Colorado at the height of the gold rush before continuing on to California. A decade later, he invested in a Colorado colony that would come to be called Greeley. But move out West? After a lifetime in New York City? Not hardly.
–Mark Boardman, True West magazine

Vandalized? I think not! That would be a sign of white power oppression. The house was *fortified*