“This endangers the lives of 300 children who attend the school.” 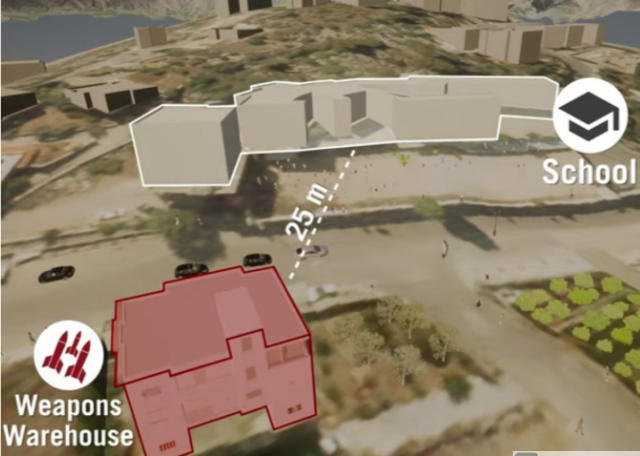 The Israeli military has released satellite imagery showing terrorist militia Hezbollah building a massive weapons depot next to a school in central Lebanon.

“Satellite images of the alleged warehouse show a four-story building across the street from Ebba Public School, which the IDF said was attended by roughly 300 students,” The Times of Israel reported.

The weapons cache stored by the Iranian-sponsored terrorist militia next to the school is comparable to the explosives stashed near the Beirut port that caused a massive blast last year. It killed hundreds and injured thousands of Lebanese civilians.

“The explosion of the warehouse would be half the size of the Beirut explosion of last year that killed at least 211 people and badly damaged a large part of the city,” The Jerusalem Post noted.

Our intelligence can reveal that Hezbollah has built a weapons warehouse just 25 meters from a school in the village of Ebba, Lebanon.

This endangers the lives of 300 children who attend the school.

Hezbollah doesn't want you to RT this,
but these innocent children need you to pic.twitter.com/FJyEyJZrIu

The Israel Defense Forces on Wednesday released data on a building in the southern Lebanon village of Ebba that the Intelligence Division has identified as a weapons warehouse belonging to the Hezbollah terror group, located approximately 25 meters from a school.

The IDF accused the Iranian proxy of deliberately utilizing civilian structures for what are effectively military uses.

It said that Hezbollah intended to use the contents of the weapons store against both IDF soldiers and Israeli citizens.

An IDF tweet showed an aerial shot of the alleged warehouse – and the school just 25 meters across the street. The school educates some 300 students from the first grade to the twelfth.

The army said that this was one of thousands of similar targets whose positioning is intended to endanger the lives of innocent Lebanese citizens.

It said it would do everything in its power to avoid unnecessary Lebanese casualties but it would not hesitate to eliminate active targets.

The army expressed the belief that the weapons would be removed once their location secret location had been exposed.

Once again, the IDF revelations expose Hezbollah’s long-held tactic of using Lebanese civilians as human shields in its campaign of terror against neighboring Israel.

According to a February 2021 report issued by Israel-based Alma Research and Education Center, Hezbollah has set up rocket launch sites in heavily populated areas in Lebanese Capital Beirut as it gears up for the next terrorist escalation with Israel.

“Hezbollah plans to launch these weapons toward civilian targets and population concentrations in Israel from within or adjacent to residential buildings. Hezbollah believes that this tactic will grant it immunity against IDF’s attacks,” the report concluded.

Hezbollah is not the only terrorist group that cowardly uses civilians as human shields. The Iran-funded Islamist group Hamas employs the same tactic in Gaza.

“The Hamas terrorist organization chooses to use civilian structures for its military purposes and often launches rockets from densely populated civilian areas in Gaza,” the IDF revealed in a statement during the recent Gaza conflict.

Legal Insurrection has long reported how Palestinian and jihadist terrorist groups show utter contempt for human life on either side of the border.

“Israel goes to extraordinary measures to comply with the laws of war, but it doesn’t matter to the media and the anti-Israel propaganda machine,” Professor William A. Jacobson explained in 2016. “Hamas and Hezbollah deliberately store and fire rockets from civilian areas for this very reason.”

This has been a common tactic with Muslums for years.

I thought the squad sid this was a myth

IDF needs to take it out!

They can even take it out when the school building should be empty, if they want to be altruistic.

Not to worry Joe Biden will provide them with the money to make more that are at the hospitals where they belong.

The world doesn’t really care. The Dems do not care. The Euros do not care. The Russians, the Chinese, even the Arabs and the “Palestinians”? They do not care. All they care about is killing Jews and then condemning the Jews for defending themselves. How much more evidence is needed of this sickness?