“Fox News beat CNN by a staggering 83 percent during the Biden town hall with regular programming.” 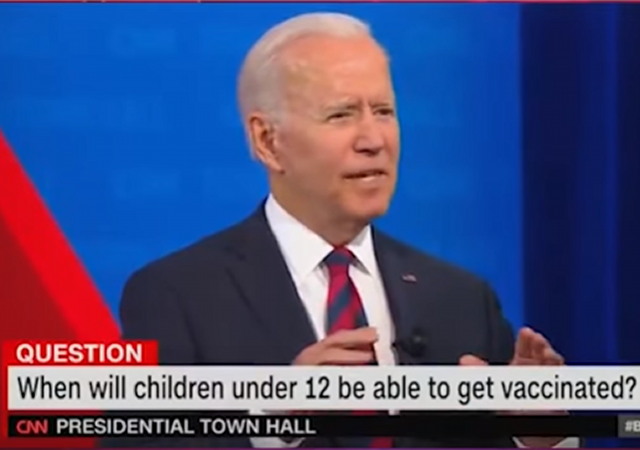 If you skipped Joe Biden’s town hall event on CNN on Wednesday night, you were not alone. The broadcast, hosted by the network’s Don Lemon, was a ratings bomb.

CNN’s heavily promoted town hall event with President Biden failed to resonate with Americans on Wednesday night, as it got thumped by Fox News and even finished with a smaller audience than MSNBC.

If you skipped the event, you missed new moments in Biden-babbling like the stunning clip below:

This is an actual line from that clip transcribed verbatim:

“The question is whether or not we should be in a position where you uh… um… are, why can’t the… the… the experts say we know that this virus is in fact uh… um… uh… is is is going to be or, excuse me, we we we…”

And not only were the ratings awful, but the actual venue also wasn’t even full.

The town hall, moderated by CNN anchor Don Lemon, was held in a half-empty auditorium at Mount St. Joseph University. Pictures tweeted by members of the traveling press corps showed more than a dozen empty rows of seats at the rear of the venue, while the audience was clustered in the first few rows for the benefit of CNN’s cameras.

CNN spokeswoman Lauren Pratapas told The Post late Wednesday that the audience size was “typical … for a CNN town hall.”

See the picture below:

What the Biden CNN town hall looks like from the back of the auditorium: pic.twitter.com/juUehd7PDu

Remember back in 2008 when Democrats and the media told us John McCain was too old to be president? Good times.

Is one of them Max Headroom?
On another website, the commenters have taken to calling him “Buffering Biden.”

Landslide victory legitimately obtained, to be sure.

DNC: “Dammit! Can we get Dominion to buy Neilsen?”

Even at this point, it’s almost impossible to find a Biden supporter who can praise him or point to something good he did. The response is always “Blah blah blah Trump Orange Man Bad”.

Do you have any ocean front property in Nevada you would like to sell?

Biden is irrelevant. An incredibly corrupt Junta runs out country. If voting machines are used, the Junta will be in power for years.

Maybe if they had added a laugh track …

Like they used to do on sitcoms. You would think it was funny because you thought you heard the audience laugh.

I refuse to listen to anything with a laugh track. Cannot stand them.

Are the results of viewership leading to frustration and anger about ‘misinformation’? Is this the reason the WH is colluding with tech to censor?

Biden wasn’t the most effective communicator in his prime, much less now. Apart from an uncritical, friendly legacy media who tend to act as surrogates the WH communication strategy is failing.

The decline of viewership at CNN, MSNBC and the growth of pod casts and other internet based platforms, some which have a larger audience than the networks, hinders the ability to control the messaging.

So under these conditions censorship of dissenting voices becomes appealing to the WH. Heck, it becomes vital to suppress competing voices and narratives,, from that perspective.

Tucker Carlson had a devastating segment on this topic last night, starting with a description of how the Biden* regime is working to gut our 1st Amendment rights in the name of fighting “disinformation” and then moving on to highlight the abject lies and gaslighting that made up his “town hall” meeting.

I missed it. I usually watch TC on Monday and then Kennedy the rest of the week if I watch TV at all.

Glad that someone with a much bigger platform than mine sees what is happening and is putting the truth out.

If you skipped Joe Biden’s town hall event on CNN on Wednesday night, you were not alone.

What the hell? I didn’t even know that Biden was going to have a “town hall” event Wednesday night. Not that I would have watched it even if I had known about it. Watching Joe try to speak in complete, coherent sentences is just too painful.

“If you skipped Joe Biden’s town hall event on CNN on Wednesday night, you were not alone.“

And RethugiKKKans say that White Nationalism is not a problem! Not watching CNN = violence.

World leaders from 15 countries attend opening ceremonies at Olympics except for USA, Joe Biden sends his wife. Even VP could not bother to attend.

Joe’s travel and speaking will be more and more limited as his Alzheimers advances.

How many tuned in, then tuned away, not wanting to watch this man slide further into the abyss of mental decline?

How many reporters reported on it vs how many covered it up?

There were no gaffes to count. Biden hasn’t made a gaffe in ages,

There’s no Freude like Schadenfreude — no Freude I know.

CNN? Isn’t that the channel you see in airports? The one with the white haired gay guy with a perpetual frown?

Even people who voted for Biden ignore him because he is such an obvious embarassment.

DJT tomorrow could fill that auditorium with a day notice

Maybe those 81 million are ashamed what they gave us, or just had more important things to do that night.

I crack myself up sometimes.