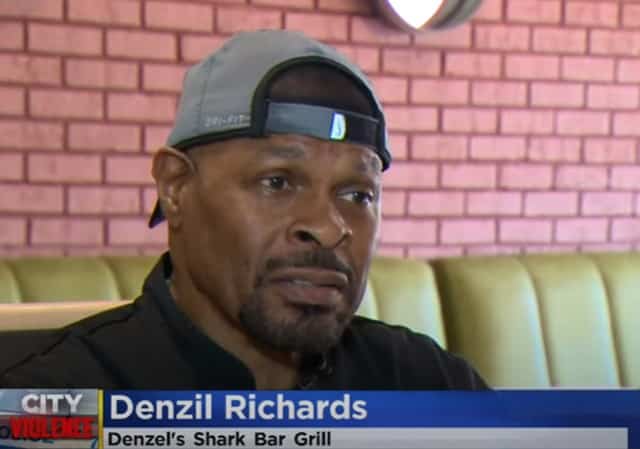 Frustrated business owners in Baltimore are tired of rising crime and are becoming increasingly concerned about the safety of their employees and customers.

Dozens of them are now telling the city to do its job, or they won’t pay city taxes and fees.

This is completely justified. The City of Baltimore is not delivering the services that these business owners pay taxes for in the first place.

Jessica Anderson and Tim Prudente report at the Baltimore Sun:

Fells Point businesses threaten to withhold taxes if Baltimore does not address crime, drug dealing and other issues

More than 30 business and restaurant owners in Fells Point are threatening to withhold taxes if city leaders do not address crime, trash and other issues they say are plaguing the waterfront neighborhood.

The group sent a letter to Baltimore officials Tuesday — two days after three people were shot in the popular and historic nightlife destination early Sunday morning — complaining about blatant drug sales, public drinking and other problems they say are happening in plain sight while police are handcuffed from enforcing the law.

The letter bemoans a “culture of lawlessness” that allows the ” the kinds of violence and tragedy we witnessed (over the weekend).”

The letter is a sharp response not only to the violence of the weekend, but also to the policies of State’s Attorney Marilyn Mosby, who earlier this year announced that she will no longer prosecute a host of crimes, including drug possession, public drinking and urination, and trespassing, among others.

Nearly 40 Fells Point business owners sent a letter to Baltimore leaders on Tuesday, threatening to withhold tax and permit payments if the city doesn’t respond to their requests.

The letter comes after recent violence over the weekend, including two separate shootings that injured three people in Fells Point.

The owners of “EC Pops” moved to Fells Point from Ellicott City three years ago. The pandemic was tough to navigate of course, but owner Doug Yeakey says in addition to the violence in the neighborhood over the weekend, the problems go even further.

“There’s public defecation, there’s trash all over the place. It’s just totally disgusting. The other things that were seeing, we’re seeing people selling alcohol out of the back of their vehicles, we’re seeing those same people giving alcohol to minors, and so that’s not doing anything to help the problem…

The left is fond of making lists of demands. It’s way past time for the people who pay the bills in this country to start doing the same.

Unfortunately, it’s a one-way street. Municipalities can fail to provide services, with no recourse to citizens but the ballot box – which isn’t useful to get rid of non-elected managers and supervisors. On the other hand, there’s nothing stopping the municipality from declaring a property owner delinquent on tax payments and then seizing the property. You can try to fight it in court, but black-letter law is on the side of the government in the form of tax codes. There’s no equivalent that specifies exactly what the government must do in return – altough there may be laws on the books against public defecation/urination, vandalism, loitering, etc., there’s nothing that spells out exactly how those laws must be enforced.

Along with that being that it is established law that the government has no duty to protect any given individual means that you have zero recourse outside the ballot. Given the bloated size of some governments’ bureaucracy, even the ballot box does not change anything.

Given the ability to manipulate ballots to obtain a predetermined outcome, even the ballot box does not change anything.

Maybe this is what the Great Reset globalists mean by “You’ll own nothing, and you’ll be happy.”
How can people who own nothing pay taxes?
And what can the government seize from them if they don’t?

“How can people who own nothing pay taxes?”

The government can surely seize the property of all delinquent owners. Just as surely their tax base will drop to zero.

California counties operate on the same fallacy. The SF Bay Area counties, for example, have spent hundreds of millions of taxpayer dollars buying all the undeveloped land they can. It’s “greenspace”, and therefore presumptively awesome for them to do that. The same counties keep complaining that tax receipts aren’t enough, as if the tens of thousands of acres of fallow unproductive land they own, generating zero tax receipts, has nothing to do with their budget problems. Not to mention their budget problems get a lot better if they had a few hundred million dollars in cash in hand rather than land.

The big stick that businesses wield is shutting down their businesses. There is nothing that the city can do to stop them. Perhaps, if the city takes legal action to recover the delinquent taxes everyone of these businesses could shut dow.

Having grown up in Flint, Mi and then living for three years in Detroit, and seeing rioting, looting, and its aftermath, I think that Baltimore is toast.

Cities that get this bad continue to decline, and not just from white flight, all people who can afford to move, do so.

NYC is on that same road to ruin.

I am originally from Baltimore…Highlandtown/Patterson Park, then Pigtown to be exact. Camden Yards was a railroad yard back then. Left there in the 70’s, came back in the mid-80’s, saw no appreciable benefit, and left again. Never went back after that, except to visit the eternal resting places of my mother and father in Loudon Park. My family still lives there, and many are firefighters and police in the city.

It saddens me to see how low “Charm City” has gone.

My next door neighbor, formerly a resident of Detriot (note the spelling), says moving to our Birmingham suburb is the best thing he ever did. It’s quiet here and he never worries about gun shots around his home at all hours of the day or (especially) night. There’s a story here. He’s a great guy, BTW.
.

They obviously have to send in more social workers to emit soft cooing noises to subdue this lawlessness.

But if they are fighting with knives, that is perfectly normal, so leave them alone.

I think it’s high time that we start having a say in where our tax dollars go. whatever happened to no taxation without representation?

While it has been dead in practice for a few generations, it formally died in January of this year.

Baltimore businesses should organize a an effort to dump trash and defecate on the steps of City Hall. Maybe that would get there attention.

Biden should send Harris to shut down the Md Pa border by closing #83 south between York Pa and Balto. The would cut off the white supremacists in south Pa from entering and terrorizing Balto. So no more issues in Fells Point and large reduction in 300+ a year Balto murders.

A weak effort. They really need to close the “Iron Pipeline” of I-95 on both ends.
As a bonus, they’d stop “all those illegal guns” coming in “from out of state.”

Harris going to a border? The only way that could happen is if there was someplace there handing out reparations, to make it worth her time…

Not to mention that Fells Point, in addition to being close to tourist attractions like the family-oriented National Aquarium and a number of large hotels, is not that far away from Camden Yards and M&T Bank Stadium, so people who come into town and consider going there before or after an Orioles game (not that I expect there are many attending Os games these days) and Ravens games (when they get going) will just decide to go somewhere else.

The mayor purposely allowed the riots.

Unfortunately MD is so far to the left that this won’t have a political impact and legally they don’t have a leg to stand on for not paying tax.

I wish I could say otherwise.

When Trump said similar things about Baltimore, he was attacked as a hateful bigot.

In numbers (and unity) there is strength. The city of Detroit would think nothing of seizing (and destroying) 30 or 300 businesses. If 3,000 business witheld their taxes and were already lawyered up to contest unequal treatment of seizing some but not all tax-withholding businesses it would have a way of focusing the city’s attention. And then if noting else works, there’s always hemp.

There is only one solution I know of. Move to a red state.

This is Baltimore where they give rioters “room to destroy”.

If the rewards of the grift stop flowing as freely, the forever on-the-take democrats might actually notice.

move out. take your businesses elsewhere and let the city rot.

You know how I know that video report was fake?
Because black people can’t get ID to vote. So how can they actually host a news show and do broadcasts from the sites of the problem.
Fake News.
I hope this riles up tons of black folks to go out and toss those dem racists.

I don’t have a “thing” for black chicks. I’ve found the Nordic chicks dig us swarthy Mediterranean olive pickers. Actually I learned that decades ago. But still. I’m going to start a go fund me account so I can continue the outreach program to the black chicks. Please give generously.

Agree with the blue-suited guy who speaks Bill Cosby.

If I lived in Baltimore, I’d be happy to volunteer for trash pickup.

Anything I can do to keep “them” from destroying my city.