Morocco normalized relations with Israel under the Trump-brokered Abraham Accords. The antisemitic Boycott, Divestment, and Sanctions movement showed it’s even more extreme than Hamas in enforcing secondary boycotts of Israel. 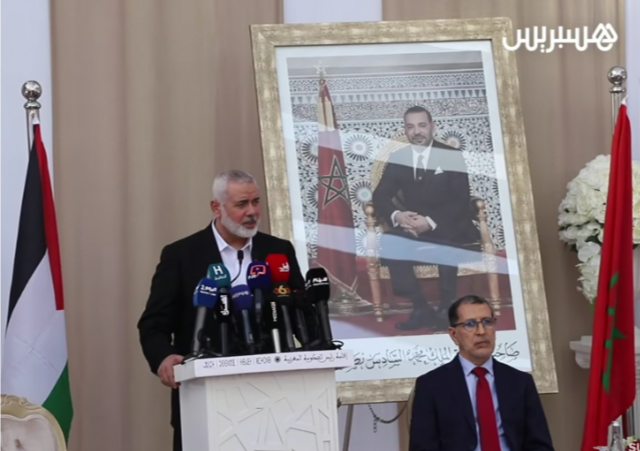 The anti-Israel Boycott, Divestment, Sanctions (BDS) Movement has condemned the leader of the Palestinian terrorist group Hamas for meeting with the Moroccan Prime Minister after the Arab country signed a normalization agreement with Israel last year.

The BDS Movement has been angered by growing diplomatic and commercial ties between Israel and the Arab states that began during former U.S. President Donald Trump’s tenure. Morocco established diplomatic relations with the Jewish State in December 2020 as part of the Abraham Accords framework created by President Trump.

Hamas chief Ismail Haniyeh visited the Muslim-majority North African country earlier this month in an effort to mobilize support for his jihadist group after its last month’s terrorist offensive against Israel. Hamas and allied Palestinian terrorist groups fired around 4,500 rockets aimed at Israeli towns and cities during the 11-day terror campaign.

The BDS Movement, which has established a foothold in the left-dominated U.S. and Western college campuses, is known to have ties with Palestinian terrorist organizations, including Gaza-based Islamist Hamas.

The boycott, divestment and sanctions (BDS) movement is upset at a Hamas leader for meeting with the Moroccan prime minister due to Morocco having relations with Israel.

BDS released an Arabic-language statement on Tuesday to “denounce” Hamas’ political head, Ismail Haniyeh, for meeting with Moroccan Prime Minister Saadeddine Othmani. The meeting took place last week during Haniyeh’s trip to Morocco, during which he also met with Islamist and opposition parties.

“We strongly condemn Haniyeh’s meeting with the Moroccan prime minister, which betrays our people and furthers normalization with the occupation and its continuing crimes,” BDS said in the statement. (…)

Morocco normalized its relations with Israel in December as part of the Abraham Accords, which were brokered by the former Donald Trump administration. The countries previously had informal relations in the 1990s. Morocco once had a sizable Jewish community, but a mass exodus to Israel began following anti-Jewish riots in 1948.

The BDS Movement has great sway over Hamas and other Palestinian terrorist organizations. Several convicted terrorists are on the payrolls of foreign-funded NGOs and charities linked to the BDS campaign.

According to a 2019 study published by Israel’s Ministry of Strategic Affairs, the BDS campaign has deep operational and ideological ties with the Palestinian terrorist groups, such as Hamas, the Popular Front for the Liberation of Palestine (PFLP), and the Palestinian Islamic Jihad.

“Terrorist organizations and the BDS campaign have united in their goal of dismantling the Jewish State, with the former viewing boycotts as an additional tactic to their armed attacks against Israel,” the then-Israeli Minister of Strategic Affairs, Gilad Erdan, explained.

Many European governments have condemned the BDS Movement for its blatant Antisemitism. In May 2019, German parliament passed a resolution denouncing the BDS as antisemitic, comparing it to the Nazi boycott of Jewish businesses of the 1930s.

The Trump administration took a tough stance against the anti-Israel BDS campaign. In November 2019, former Secretary of State Mike Pompeo told the State Department to “identify organizations that engage in hateful BDS conduct, and withdraw US government support for such groups.”

Soooo BDS is to Hamas as Progressives are to Democrats (blue dog). When Hamas isn’t moving far enough to an extreme, you join BDS. I won’t bet on it, but I’d guess a lot of the BDS folks were Hamas or at least sympathetic and supportive. Until they realized they could join an even more extreme group.

Blue dog is to Democrats what extinct species are to present ones.

A few people would disagree. Manchin. Sinema. Maybe tens or hundreds at the state level, too.

Perhaps, but, I think it’s fair to say that the “Blue Dogs” are effectively politically impotent, inasmuch as they wield no meaningful power at the Dhimmi-crat Party’s national leadership level, and, they have zero influence with regard to shaping the Party’s platform. The Dhimmi-crats’ inexorable march towards ever-greater Leftist radicalization and extremism is proof of that. Sure, on a purely individual level, Sinema and Manchin possess power as a result of being key “swing” votes in a closely-divided Senate chamber, but, as an ideological bloc wielding a collective, moderating influence on their Party’s worst and most extreme excesses — as they did under President Clinton — the Blue Dogs are no more, sadly.

Or about half as extreme as Democrats!

When it come time to seek donations for election – Senator Hirono will now come out and say the Democratic Party has never “officially” supported BDS.

> Just as she recently stated that “defund police” was never an official policy of the Democratic party.

It must take a lot of effort to play all these semantic work games and to keep all the lies straight. But they sure have a lot of practice.

Is there a button we can push and eviscerate these global pests obsessed with “Free Palestine!”? These people are human crotch rot.

And, bear in mind this insanity — vile, tottering, feeble and dim-witted Chinese communist vassal/puppet/dhimmi/dotard, Chairman Xi-den, his vile regime, Secretary of State, Blinken, and the vile Dhimmi-crats, at-large, see absolutely nothing wrong with having the flag of the despicable, racist, Muslim supremacist/terrorist-sympathizing, Jew-hating, Marxist-Leninist, neo-communist, subversive, anti-America group that is “Black Lives Matter,” flying over America’s embassies. Nothing wrong at all; to them, this ridiculous and idiotic stunt is an allegedly laudable act.