Another crime against Asians has fallen through the cracks. Remember when any attack on Asians gained national attention? 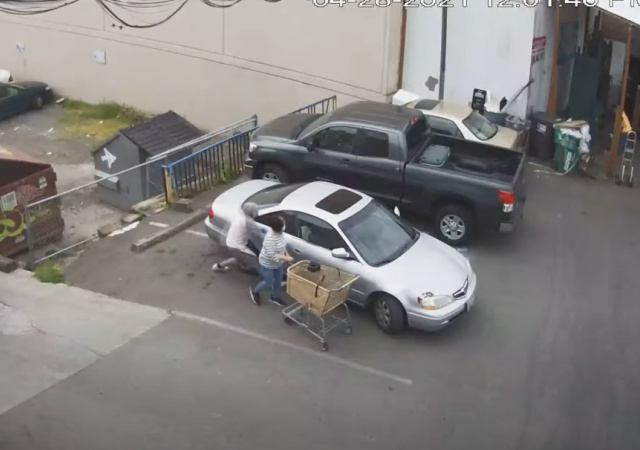 The Seattle police arrested James Credit, 26, for allegedly stealing purses and bags from women in the past six weeks.

The department’s Bias Crime Unit began an investigation due to the victims being Asian.

Surveillance video caught Credit allegedly robbing a woman on April 28 at Lam’s Seafood Market. The suspect “ran up to her, stole her purse, and jumped into the passenger seat of a getaway car.”

Seattle Police said they have linked Credit to 14 thefts since early April, adding that rental cars with licensed plates removed were used in some of the thefts.

Police arrested Credit Tuesday at a rental car office, and said he had a gun, which is illegal because he is a convicted felon.

“We’re going to be finding these people and holding them accountable,” said Detective Patrick Michaud of SPD.

The department understands why the Asian community remains hesitant to report crimes. But Michaud applauded those who have come forward because they provide valuable information. Without them, the police “wouldn’t even have been able to make an arrest like this.”

James Clifford Credit has been arrested & charged in Seattle. He’s accused of robbing exclusively Asian women across the city. He’s a convicted felon who also faces a charge of illegal possession of a firearm. #BLM #StopAsianHate pic.twitter.com/TjQAbFUJY6

What a big smile. The thief must have read Kendi’s book about anti-racism and is just trying to get what is due him.

He knows that liberal criminal justice policies will have him back out by dinner time to get more purses.

Give Credit where Credit is due, as it were…

Reparations – one handbag at a time.

Given that this is yet one more black on Asian crime, I doubt it will see the light of day. Therein is the pity of it all.

Then, why are we reading about it here, and why was it covered by a major broadcaster in the Seattle area, KIRO?

I invite you to read the KIR07 story. Outside of his name, the perp’s race is not revealed. That’s usually revealing.

Exactly. You have to go research the name of the perp to identify his race.

I took “it” to mean the story, not the race. And, today, when there is no picture, one can make an assumption and be correct virtually all the time.

First, is it truly racist? Or is it the culture? I note the women are between 40 and 80, and mostly Asian – meaning they might be first or second generation immigrants. So, their cultural practices might be such that they are lax in security? Or just older and therefore easier to take advantage of?

Also, might it be the whole area is just vulnerable to this sort of thing? And he’s just working his field?

For a criminal asshat, I don’t think it’s worth exploring the nuance.

if some of his victims were under 39 there is no discrepancy.

Sounds like this is racism directed towards Asian women, maybe a hate crime.

The King County Prosecutor will release the thief on his own recognizance right away. Because Black Lives Matter, of course.

After suffering over 400 years of slavery, Credit could not distinguish between PONC.. people of non-color. Asians are the oppressors in the hood… as shown in the Smithsonian Museum of Black History… Asian have all the “whiteness” attributes… hard work, intact families, venerating the old and the educated. Where is the Tong when they need them?

125K according to Ngo, but Kamala will cover it for him.

Does Seattle have a criminal bag limit a la California? Weird solution.

Wouldn’t you know it. Another Trump voting, MAGA Head hateful, criminal in blackface.

“Remember when any attack on Asians gained national attention?”

No. But I do remember when one outlier gained ALL the attention, because it was done by a white guy. Who, as it turned out, didn’t even care about Asians, he hated hookers.

Sort of like Chicago on the one hand, and a suburban school shooting on the other.

I lived in Seattle for 20+ years until escaping to the WA State countryside in 2017. Here’s what’s missing from the posting and the comments: Seattle’s “international district” (Japanese and Vietnamese being the biggest elements) is close to part of Seattle’s black ghetto, including a big housing project.

Big black men routinely rob smaller Asians, especially women and the elderly. Everyone in Seattle knows it, but no one will talk about it. Instead, they sing Kumbaya and act like this is some sort of mystery, which it most certainly is not and never has been.

You can now return to yammering.