One tax rate to rule them all, and in bureaucracy bind them. 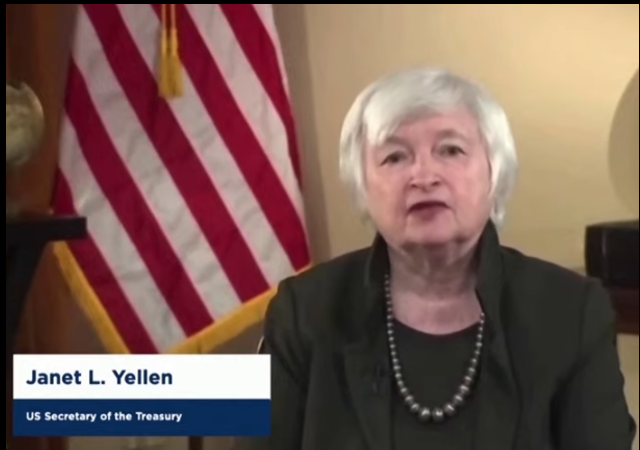 Yellen made the comments in front of the Chicago Council of Global Affairs at a time when the Biden administration is contemplating raising corporate taxes to pay for an ambitious nationwide infrastructure plan.

While the plan will go to rebuild roads, bridges, water lines and electrical grid, some fear corporations will move their operations overseas to avoid the new taxes altogether. Yellen complained that some countries are participating in a “race to the bottom” in regard to their corporate tax rate.

“Competitiveness is about more than how U.S.-headquartered companies fare against other companies in global merger and acquisition bids,” Yellen said in prepared remarks. “It is about making sure that governments have stable tax systems that raise sufficient revenue to invest in essential public goods and respond to crises, and that all citizens fairly share the burden of financing government.”

The move appears to be an attempt to head off the damage the Biden tax hike is likely to cause.

President Biden’s proposal to raise the corporate tax rate to 28% from 21% would push the U.S. from the middle of the pack among major economies to near the top. The Biden plan would also impose a 21% minimum tax on U.S. companies’ foreign income, remove an export incentive and raise taxes on some foreign companies’ U.S. operations.

If the U.S. raises its tax rates and imposes higher burdens on U.S. companies’ foreign profits, a global minimum tax would help prevent companies based in other countries from having a significant potential advantage. That coordination and the ensuing tax revenue—not necessarily the aims of U.S.-based companies—rank high on the administration’s priorities.

I am struggling to care about corporations. Between Woka Cola, Delta Airlines, and other big corporations pushing social justice and racialist dogma harder than products, I find it difficult to tap into my capitalist soul.

On the other hand, those higher taxes will put more money into the coffers of global elites like Yellen, other globalist lackeys, and China. Furthermore, there will be no refuge from their money grasping ways. I think I hate the idea more.

Not everyone is ready to go global when it comes to financing.

What is best for the US? I believe this a question most Americans should be asking.

So the US wants to raise taxes in all countries ? I am sure China will oblige 😂😂

In summary: One tax rate to rule them all, and in bureaucracy, bind them.

Easy for her to say! She has already cashed in.

I was about to point out the same thing.

The epidemic of treason in our country continues.

Nice to let everyone know how vulnerable the USA is now that it is on a spending spree with no end in sight. The USA is asking (demanding) a tax cartel to be formed to bail out the USA. Globalism at its finest.

Minimum global tax. Because the world government always does what Janet Yellen commands.

What do you mean we don’t have a world government? Yellen thinks we do and that’s good enough for me!

Starting with Wilson and his 14 Points and his League of Nations the globalists have wanted world government. Give them worldwide taxing authority and a standing army and we’re there. Matters are not that far off.

I second the sentiments of the commenter above: NO.

Well its actually being endorsed/pushed by the OECD as well so she isn’t alone in advocating it.

They also forget that no company has ever actually paid taxes. They just pass it on to their employees (in lower wages) and their shareholders (in lower distributions and share value).

And of course their customers in higher prices.

Jumping straight to Marxism, how about a universal planet wages then?

Don’t give them ideas. ‘Cause that would only work if their plan was to kill off 75% of the planet’s population. Which it probably is.

Government Greed is talking over again after a brief respite.

This just means that more “American Companies” will move headquarters to the Caymen Islands or some such and base their business from there. Then they will only have to pay taxes on that portion of business done in America as a foreign company. America loses again.

“tax competition” distorts the economic playing field and pressures governments to erode their tax base.”

I can understand why you think that’s a bug, Janet, but to the taxpayers, it’s actually a feature.

I can’t wait for Yellen to come out and propose a minimum state income tax, because states like TX and FL have an unfair advantage.

And minimum state sales, property, tobacco, and gas taxes. We can all live the California dream!

It’s called “competition.” Maybe if Democrat administrations hadn’t, over the years, driven US corporations to move manufacturing out of the country, she’d have a better appreciation of competitive tax rates. By asking for a “global tax” for the state purpose, she’s admitting that the US has become uncompetitive. This should give her partial credit for understanding we have a problem, zero credit for not understanding the problem, and negative credit for suggesting a globalist solution.

Somewhat related, it seems to me that the biggest risk this country faces during the Biden/Harris administration is the consequences of what looks to be absent/incompetent leadership. Something happens (like the Border) or is allowed to happen (Russia/Ukraine or China/Taiwan) that turns into a Black Swan catastrophe because no one has a clue.

America is more or less like Westeros, with Joffrey in charge.

That’s a problematic argument to make, its a variety of factors that have driven production to China. Not least of which is lots and lots of cheap labour.

The phrase “harmful tax competition” is everywhere in EU and OECD policy documents.

She isn’t doing this to reduce competition for US companies. She’s doing this to make it possible to raise tax rates to astronomical levels. If there is one world tax rate, then you can raise it simultaneously worldwide, and there is no escape. That’s why the EU tax harmonization rules were instituted, so that there is nowhere within the EU you can go to get a better deal.

The point here is to kill Europe and its diaspora. The Muslim Middle East, Africa, India, and China (and very probably the rest of Asia) won’t be joining this suicide pact.

The Muslim Middle East, Africa, India, and China (and very probably the rest of Asia) won’t be joining this suicide pact.

My thoughts exactly. At some point, those countries/regions in particular will tell the West to go pound sand and the West will have no leverage.

There are so many arguments against this from both the Right and the Left. I can’t see this going anywhere.

They’d all start moving their operations into space.

Sure!
Third-world countries that lost out on revenue when Trump encouraged (or intimidated) manufacturers to return to US shores, they will be SO eager to kill their revived economic advantage by raising their corporate taxes.

And, after hearing Biden’s brazen lies about the Georgia voting act and the border crisis, our burgeoning unemployment will be touted as a reduction in unemployment. Why not? Enough fat cats are toeing the line so far.

THIS IS ORWELLIAN IDIOCRACY! (I wonder what George Orwell did to merit prophecy.)

If she thinks that other countries will not take advantage of thigh U.S. taxes, she must think that their governments are as stupid as our present work.