“This effort to discredit and harass me and my family…has taken away from where the focus should be– ending white supremacy.”

For the second time in as many weeks, Black Lives Matter co-founder Patrisse Cullors is under fire for what many of her comrades see as betraying her avowedly “Marxist” values.

As far back as 2015, when she explained the ideological foundations of her movement to Jared Ball in an interview with anti-capitalist Real News Network, Black Lives Matter co-founder Patrisse Cullors has referred to herself as a “trained Marxist”. Though her profession of familiarity and adherence to Marxist dogma was clearly meant to legitimize Cullors’ BLM activism in the eyes of Ball’s audience, it has actually served to discredit her; in the recent months, multiple stories have emerged about Cullors’ partnerships with massive for-profit corporations and acquisition of considerable personal wealth and property—leading her followers and opponents alike to angrily point out that Cullors seems happy to abandon her Marxist principles when it comes to her own ballooning largesse. 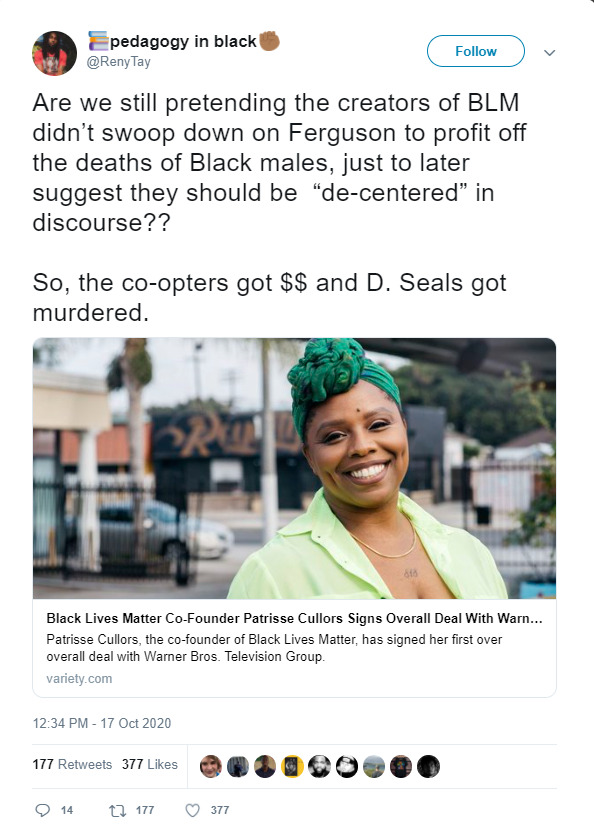 The Daily Caller recently broke yet another such story. In this one, the conservative news outlet reported that Cullors

raked in upwards of $20,000 a month serving as the chairwoman of a Los Angeles jail reform group in 2019, according to campaign finance records reviewed by the Daily Caller News Foundation.

Reform LA Jails disbursed a total of $191,000 to Cullors in 2019 through her consulting firm, Janaya and Patrisse Consulting, according to financial records submitted to the California Fair Political Practices Commission. The description for each of the seven reported payments to the Cullors’ firm that year read: “P. Cullors, Principal Officer, Business Owner.”

🧵How did anti-capitalist, self-described Marxist Patrice Cullors #BlackLivesMatter monetize her activism? I wondered. Here’s what I found. She created a consulting firm with her wife Janaya Khan, an early BLM leader. https://t.co/g2XY7G0SHc “Janaya & Patrisse Consulting.” pic.twitter.com/fUWkboV7kh

Years of financial opacity and the recent controversies have reportedly pushed other Black Lives Matter leaders to call for an investigation into the inner workings of Cullors’ behemoth umbrella group, the Black Lives Matter Global Network Foundation. Moreover, at least 10 state and local chapters of the organization have publicly split off from the larger group, and published scathing critiques of Cullors. One such critique accuses the BLMGNF of “stealing money from stolen lives”.

Still, Cullors has dismissed much of this criticism as a distraction, engineered by the right-wing, from the quest to end “white supremacy”; she recently posted a statement on Instagram in which she condemned an unspecified article about her collection of luxury homes as “false and defamatory”, an example of “doxxing”, and a well-worn “tactic of terror” often dispatched against “Black activists”.

Cullors also insisted, “I do not receive a salary or benefits from Black Lives Matter Global Network Foundation. Period.” 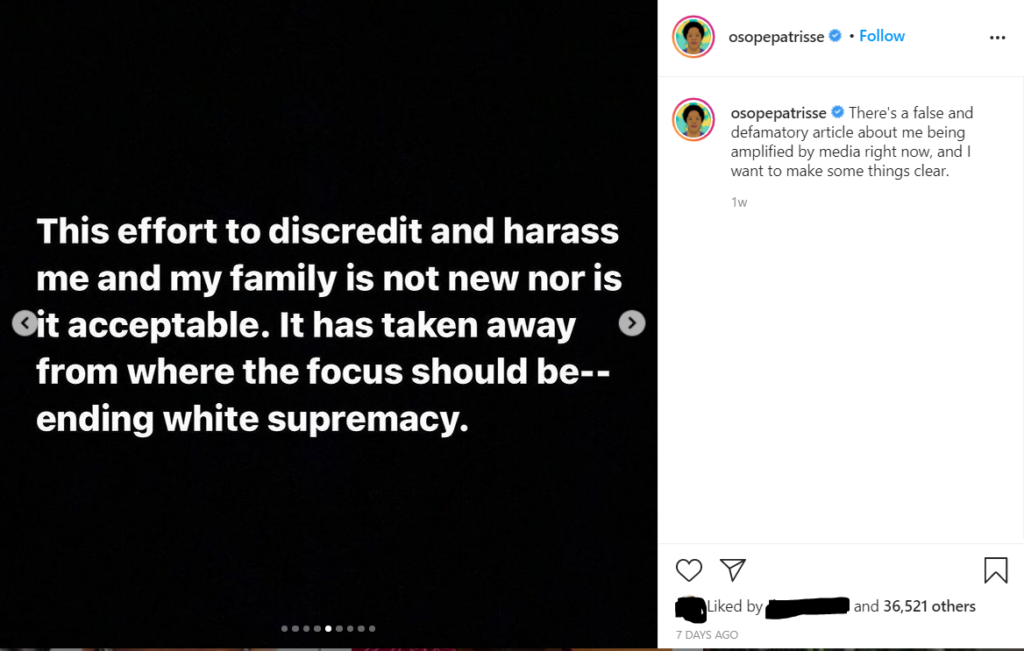 Meanwhile, as an article in USA Today reported, the Black Lives Matter Global Network Foundation even sent a cease-and-desist letter to a conservative think-tank, the Legal and National Policy Center, that had published a critical statement about Cullors’ home purchases:

Khan-Cullors said there’s no connection between the home purchases and her BLM role.

“To be abundantly clear, as a registered 501c3, BLMGNF cannot and did not commit any organizational resources toward the purchase of my personal property,” Khan-Cullors said in a prepared statement . “Any insinuation or assertion to the contrary is categorically false.”

In a cease-and-desist letter responding to a press release from the policy center, the BLM foundation responded to demand the National Legal and Policy Center remove the “insinuation” that “funds from the Black Lives Matter Global Network Foundation’s funds have been used, directly or indirectly, to purchase real estate.”

…Khan-Cullors said in a prepared statement she has been paid a total of $120,000 from the organization since 2013 for acting as spokesperson and “political education work,” but she has not been paid since 2019.

Interestingly, the BLMGNF is apparently not the only massively influential group running interference for Cullors. Indeed, according to Newsweek, Facebook has blocked its users from sharing the original New York Post piece revealing details of Cullors’ real estate collection: 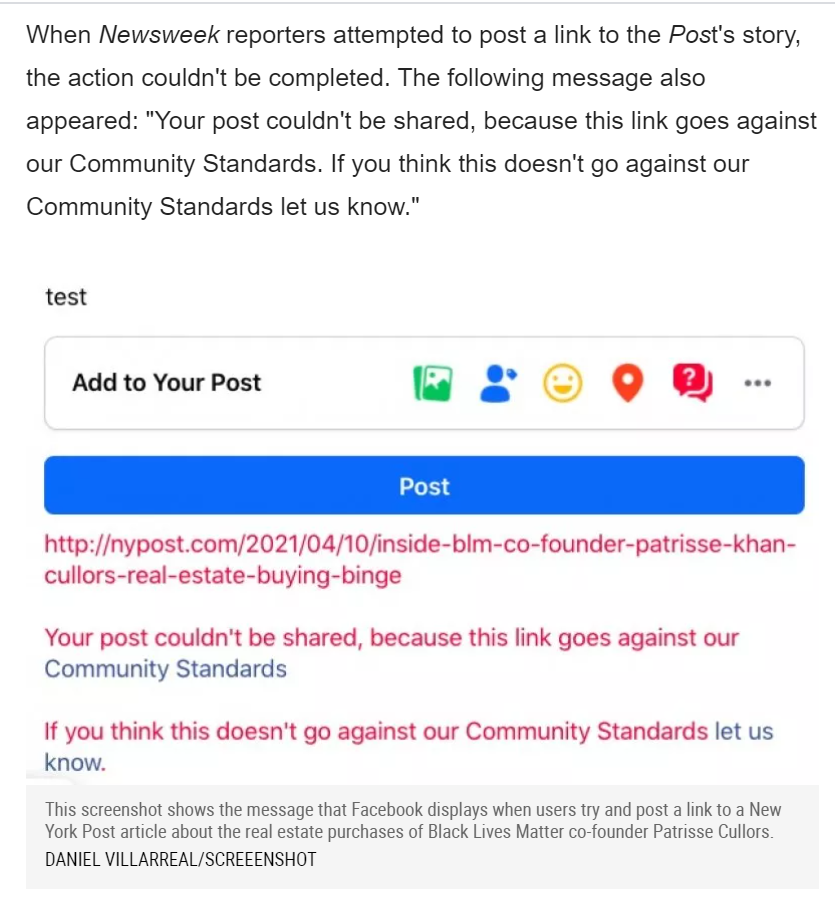 A Facebook spokesperson told Newsweek, “This content was removed for violating our privacy and personal information policy.” The policy forbids articles that share details that could identify a person’s financial and residential information, thus violating their privacy rights.
However, it was possible to post a link to the article on Facebook using the URL-shortening service, TinyURL. Links to a summary of the article published by Fox Business and an opinion column defending Cullors’ right to own such property that ran in The Chicago Tribune were also not blocked.

Stay tuned; we’ll continue to keep track of (and report) Cullors’ and BLM’s financial faux pas and accidental capitalism—even if Facebook doesn’t want us to.

They have the hustle down pat!

Slobs like this character count on our relying on the likes of boehner, mcconnell, bush, rona romney and the like.

WTF is Rona Romney doing for any of us? Can anyone say?

There is no such thing as white supremacy.

Yes, color supremacy is conjured by diversity racketeers. That said, Baby Lives Matter would be an equitable, inclusive proposition.

I decided to set out and prove Whites are not supreme or superior. I reviewed all of the prizes awarded in math, physics, chemistry, astronomy and medicine. I looked for ancient literature and philosophy in Sub-Saharan African countries. I searched for engineering and architecture in the same countries. I hoped to find sculpture and paintings similar to renaissance Italy.

I was sure I could find many things that would point to the talent equality of peoples.

Did you correct your findings for the effects of colonialism? (Never mind that most of western Europe got over Roman colonialism a long time ago. Israel also seems to not be suffering from it anymore either.)

The ‘negative effects of colonialism’ seem to be largely related to how hard the location being ‘colonized’ resisted adopting the western institutions which led to their success.

And, she added, “the negative effects of colonialism will only be blunted after I buy my fifth mansion in an all white neighborhood.”

You just shouldn’t bantu those facts around.

But there is plenty of lefty white guilt, which they are working tirelessly to inflict upon the rest of us.

A big part of the problem is giving wacktavists and sort of legitimacy at all.

Glad to know that a BLM founder agrees that doxxing is a dangerous activity, a tactic of intimidation used to suppress free speech and distort the actual facts.

Will she and BLM be filing amicus briefs on behalf of the Norfolk PD LT? Asking for a friend.

“This effort to discredit and harass me and my family…has taken away from where the focus should be– ending white supremacy.”

“Pay no attention to the man behind the curtain!
The Great Marxist has spoken!”

Nah, it’s more like you’re a clearly unintelligent fraud and a hypocrite.

Here’s some terror for you:

So the new Marxism is: capitalism is bad when other people benefit, but it’s good when I benefit, and it’s a tactic of terror when people point that out

The fundamental problem with all socialism/communism.

no matter how much $$$ is accumulated by grift/extortion/outright theft, you can’t take the hood out of the rat

If anything has been done to “discredit” any of her organizations, it’s her own demonstration that black people are not kept down by “white supremacy” and “racism” doesn’t prevent them from personal accomplishments. Her personal financial success discredits her own, and her organizations’, “America is racist” narrative.

I’m getting so tired of these people.

Where did the millions of dollars come from if, as she says, she wasn’t paid nearly enough by BLM to afford the real estate?

One multi millionaire just had part of a historic urban park bulldozed to built himself a massive monument aka “library”.

The laws simply no longer apply.

Cullors also insisted, “I do not receive a salary or benefits from Black Lives Matter Global Network Foundation. Period.”

Is embezzlement a “benefit”?

Everything is terror and infrastructure these days.

I think things started going south when Al Sharpton was given his own TV show and started to appear as a guest on various TV news shows.

How did Al Sharpton ever manage to become normalized? I don’t say this in the flippant way many do say it, but Al Sharpton truly does have blood on his hands.

If Jews rioted, the normalization of Al Sharpton by our news media would be a good thing to riot about. And not just Jews.

“Al Sharpton truly does have blood on his hands.”

I always thought Tawana Brawley was self-smeared, but your hypothesis is possible, too.

We can thank Sean Hannity for much of that normalization. Many, many guest appearances.

Add in your tax dollars to give Mumia a weekly segment on NPR’s All.Things Considered.

And exactly how much did that hideous hairdo, her nails, her outfit and her other accoutrement cost? Who really paid the bills for that? How is she supporting herself if she’s really a Marxist dedicated to redistribution of wealth?

Short answer: nobody will ever know. Hustlers gonna hustle.

BLM and the Left demand college professors be fired should they say something that makes even a single student uncomfortable and yet they find nothing wrong with demanding CRT be taught even though it makes huge numbers of children teenagers and college students uncomfortable.

BLM and the Left demand their version of fairness and antiracism that includes demands that you donate money to their cause, but should you donate money to another cause such as Kyle Rittenhouse’s defense then they do whatever they can to get you fired or otherwise hurt.

The list of one way streets in this mess goes on and they all point to the same conclusion. BLM and the Left are bullies and racists pure and simple.

It’s always amazing how the Marxist leaders get richer while the Marxist supporters get poorer……….. now that’s what I call social justice. /s

“Mommy, can I be repressed too, and live in a mansion?”

I guess the race card is no longer as effective as it used to be. Now it’s the “terror” card. On a brighter note, I’m so happy to see that someone in the black community has finally–FINALLY–broke free from her slave shackles and made good for herself, even if it’s at the expense of the very people she claims to represent.

Pointing out hypocrisy is “terror”? Not burning down cities?

A Marxist getting rich?

More likely a Capitalist scamming the Marxists to get rich!

Either way jail is appropriate!

I’d suggest that the probability that she has actually read Das Capital and mastered it is very near 0.