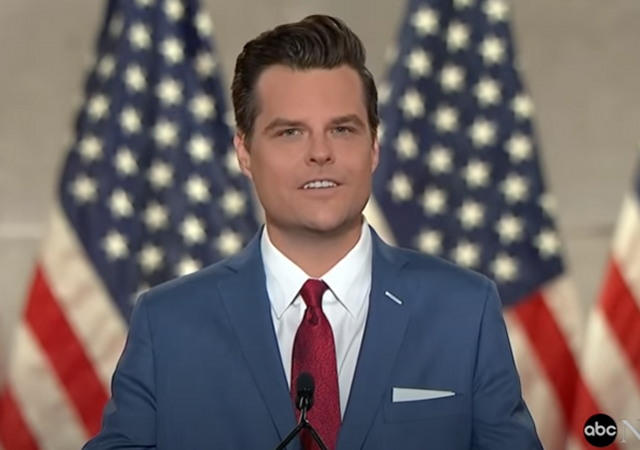 Yesterday, we brought you the strange extortion tale of Florida Republican Rep. Matt Gaetz, detailed by his unusual appearance on the Tucker Carlson show.

Since then, Gaetz has provided a flurry of documents, texts, and other forms of evidence, backing up his claim that his family was being extorted.

Emily Brooks and Joseph Simonson of the Washington Examiner have the story:

Rep. Matt Gaetz possesses text message screenshots, an email, and a typed document that purportedly support his claims that a federal investigation into his relationship with a 17-year-old is related to an extortion scheme against him.

On Tuesday, the New York Times reported that the Justice Department is investigating whether Gaetz had a sexual relationship with a 17-year-old and paid her to travel with him. Gaetz has called the report “totally false.” Gaetz told Axios that his lawyers told him that he “was not a target but a subject of an investigation regarding sexual conduct with women.”

The Florida Republican countered the report on Twitter and in statements to Axios and Fox News with a claim that his family is being extorted for $25 million and that the people pushing stories about an investigation into his relationships with women are the people extorting him and the subjects of an FBI extortion investigation over the last few weeks.

Screenshots provided to the Washington Examiner show a message that his father, Don Gaetz, a former Florida state Senate president, said he received from Kent on March 16. The message proposes “a plan that can make [Matt Gaetz’s] future legal and political problems go away.” Gaetz has denied any relationship with a minor.

This story gets stranger by the day.

See a variety of screenshots here.

A bizarre story. Where is a congressman supposed to get $25 million?

His dad is worth a pile more than that. Sold some company for 400 million, I think. Ace had it on his blog.

The same place Hidin Biden got his.

So why does LI say purported evidence when the New York Slimes backs up everything put out by a corrupt FBI, CIA and DoJ as factual? Look how many times they repeated the totally baseless claims of the Congressional idiot who even went so far as to open President Trump’s impeachment hearing with a fairy tale that even young children wouldn’t believe? Credibility? The Slimes, WimpPo, NBDNC, ABDNC, CBSDNC, CNNDCC–there isn’t a credible bone in a body employed or owned by any of them!!!!!

Um, because LI is honest?

Think about what we have here: Intimations of sexual impropriety by a prominent and popular Republican congressman who happens to be a stalwart supporter of President Trump. Allegations that he is the subject of a DOJ/FBI investigation of said impropriety.

Now there are allegations, apparently with documentary evidence, that a third party is offering to intervene to make the investigation to away in return for a $25Million “loan” to be placed in the hands of a former senior DOJ prosecutor.

That “loan” could easily be misrepresented as an attempt to bribe DOJ officials through the former prosecutor to make the investigation or any charges disappear or to otherwise obstruct justice.

Does this smell like a set-up to anyone else?

We certainly know the FBI has gone to extreme lengths to entrap or frame those considered political opponents of their controllers in the Democratic Party in the past. (LTG Flynn, George Papadopoulos, and Carter Page come to mind.)

Gaetz and family appear to have derailed the plan when they reported the attempted extortion to the FBI, forcing them to take official notice and at least appear to investigate. Then when it appeared things were going sideways on them and they wouldn’t be able to close the deal and either force Gaetz out of office or indict him, they had a tame media outlet “leak” the story. This allowed them to at least smear Gaetz with inuendo and put their initial spin on the story.

Where have we heard this storyline before? Trump, Moscow, pee-pee tape, dossier? Can’t they be even a little bit original?

Wow! Great analysis. Thanks for sharing.

I don’t know a single attorney, regardless of politics, who believes the FBI/DOJ are not corrupt. That must be factored in.

If someone had really located a missing CIA agent in Iran and needed money to rescue him, they would go to someone with the story and ask for the money, period. They would appeal to his patriotism and possibly to the credit and fame he’d receive for his generosity.

Someone proposing such a request linked to an offer to bribe the DOJ to call off an investigation into the person’s son makes the deal sound like a set up. It’s possible that the perpetrators thought the pretense (lure) of needing money for a rescue would help them gain Don Gaetz’s “assistance.” The “rescue” angle was meant to be the sugar that would help the medicine go down. Or in this case, the poison.

Everything about this is bizarre. This was an investigation started back in January when Barr was still AG, an investigation that, being the investigation of a Congressman, would have required his formal approval. Every time I think I have figured out a plausible story, it falls apart because it is Gaetz himself who brought up the 17 year-old girl when the only thing public was what the NYT has just revealed: he was being investigated by the DOJ for unspecified reasons. Everything else came from Gaetz, the $25m (which only makes sense if he was being extorted), allegations of transporting a minor across state lines for sexual relationships… I can’t make the Iran captive release make sense either.

At this point, I don’t know what to believe but I strongly suspect that there is much more to this. What has been revealed or alleged makes no sense so far. I sure would like to know who leaked to the NYT since that was the trigger for Gaetz to go public. Nothing would surprise me anymore. There are no consequences for treason anymore so what would stop anyone from trying even the most audacious and sinister political schemes? Just suggesting that there might be a conspiracy is “proof” these days that the suggester is insane because all sane people know that there is no such thing as a conspiracy.

Have any reporters contacted Beggs & Lane to ask if they wish to comment about one of their new celebrity attorneys, a guy by the name of David McGee?

Gaetz is favorably compared to Trump. They’ve tried to set up the wrong guy and he has turned the tables. It will not take as long to expose deep state treachery as it did for Russia Gate. In fact they are trying to arrange plausible deniability as I speak and scapegoat someone other than Mr. Gates. But as Ace says, expect more whoppers from the Government before this is settled.