O’Keefe’s lawyer on Twitter’s behavior: “It’s unacceptable. It’s a cartel-type behavior and we citizens must stand up against it in the courts.” 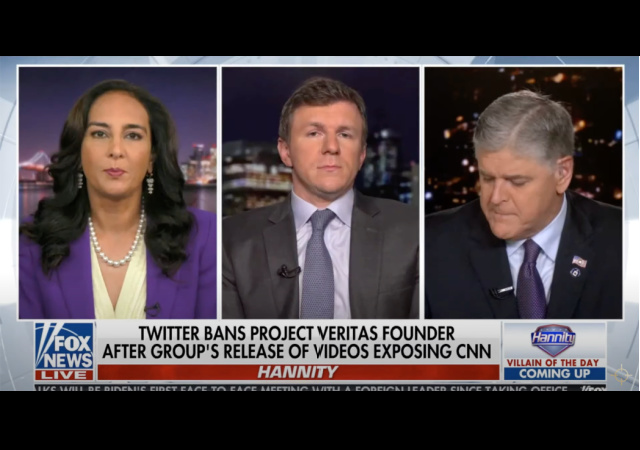 Project Veritas founder James O’Keefe announced a lawsuit against Twitter after the platform suspended him for allegedly violating its rules “on platform manipulation and spam.”

O’Keefe and his lawyer Harmeet Dhillon expanded on the lawsuit on Sean Hannity’s show:

It’s wrong what they’re doing. They defamed millions of people. They defame people every day. We will not lose. In fact, we’re going to get discovery into Twitter’s operations. We can’t afford to lose. We’ve never lost a lawsuit. And we’re going to prove malice here. We’re going to file a complaint on Monday.

They did this after we released all these bombshell reporting into CNN, calling themselves propaganda. It’s pretty extraordinary timing, but there are fundamental principles we have to fight for. I’m confident we’re going to create an army of people that are going to follow in our footsteps.

Unfortunately, O’Keefe is not the first person Twitter has suspiciously banned. Dhillon said:

Twitter makes specific factual statements about our client that are false. And even with the malice standard those are actionable because Twitter controls that information so Twitter has used this type of device to make false allegations against individuals in order to suspend them time and time again. Very few individuals, very few targets have the resources and the, frankly, the spine that Project Veritas demonstrates time again to stand up so for every James O’Keefe there are thousands of Americans who write to me about this issue and they don’t have the wherewithal to stand up.

And what these companies are doing is coordinating. It is no accident that devastating critique of CNN that came out day after day this week resulted in the censorship and permanent suspension of this voice. It’s unacceptable. It’s a cartel-type behavior and we citizens must stand up against it in the courts.

O’Keefe noted a judge on the New York Supreme Court ruled the Project Veritas defamation suit against The New York Times could continue. The judge chastised the publication “for blurring the lines between news and opinion” in a report about a video:

The judge ruled the lawsuit can go forward, finding that Project Veritas showed sufficient evidence that The New York Times may have been motivated by “actual malice” and acted with “reckless disregard” when it ran several articles against the investigative journalism outfit.

“[I]f a writer interjects an opinion in a news article (and will seek to claim legal protections as opinion) it stands to reason that the writer should have an obligation to alert the reader, including a court that may need to determine whether it is factor opinion, that it is opinion,” Judge Charles Wood of the New York State Supreme Court said in his March 18, 2021 ruling.

O’Keefe hopes his lawsuit encourages others to move against Big Tech when they defame them:

Sean, not only are we going to get discovery, we’ve already passed motion to dismiss in New York Supreme Court, a lot of people are going to be suing. This about a people’s defamation defencement. So many people are lied about by the media and this is about fundamental principles, taking on tyranny. A guy at CNN claiming they’re propaganda and yet Twitter suspends me so we are not going to lose.

We cannot afford to lose. We will depose Twitter people about what they wrote. I will publish those depositions on YouTube where the only ones who can do it. I will be the tip of that spear and we’re going to create a movement of people.

I’m also going to sue CNN for what Anna Cabrera said about me and that’ll pass motion to dismiss as well.

The lawsuit against CNN stems from Twitter suspending Project Veritas in February:

Meanwhile, O’Keefe posted video of CNN allegedly confronting a woman outside of her home and accusing her of “being a Russian troll,” as O’Keefe puts it, to show that CNN may have allegedly violated the same Twitter policy. The video includes a phone conversation between a legal representative of Project Veritas and CNN technology reporter Brian Fung, who accurately reported why the group was banned by Twitter, with O’Keefe intoning that either Fung is correct, or Cabrera is, though they are on the same network.

Mr O’Keefe seems to be making the mistake of treating Twitter’s stated reason for kicking him out as the real reason. It’s just a convenient excuse. The real reason is that he says things he’s not supposed to say. about Twitter’s fellow travelers.

This case hinges entirely on whether the judge is also a fellow traveler or not.

I dunno, Twitter claimed he was using shell accounts to promote his message (unproved) and that he was spreading misinformation (he was not). Indeed, he was doing neither. His background on winning these types of suits is impressive, and he is clearly more interested in exposing Twitter’s malfeasance than he is in winning some cushy settlement. He’s on a mission. Honestly, he sounds more like Andrew Breitbart every day. I like that.

Here’s hoping he doesn’t have a convenient heart attack.

What’s really funny is O’Keefe says “What’s not coming? Right now we have over 100 whistleblowers inside media, tech companies” So they censor everyone they don’t like now they are afraid to say anything in their own offices. They are silenced.
haha…the cosmic laugh.

They’re going to need lawyer money. I just sent some, hope others can as well. He’s right — this is a spearhead, one we can win.

I joined twitter for the first time around November of last year. My account was suspended after their supposed Q-anon purge. I have no affiliation with q-anon at all. I started up a second account, and that got suspended too. I poked fun of the Lincoln Project on Twitter, but otherwise engaged in civil conversations with people who disagreed with me. Because my goal is to persuade and debate, and you can’t do that if you match insults with insults. It’s interesting that the conservative accounts that I followed on twitter, interacted with, and retweeted mostly remained. But a middle aged stay at home mom that believes in polite debates gets suspended.

I just don’t get why you “joined” in the first place.

I have always been puzzled. Isn’t a Twitter where twits hang out?

Twitter is one of the most powerful global communication tools in the history of mankind. It a place where global leader, in the presence of everyone and God, exchange words of praise and encouragement or threats of destruction and then others can join the conversation…in real time. In that regard, it’s absolutely amazing.

There’s no cause of action. Lying is not against the law.

Lying is only civilly actionable if someone(s) is being defamed. And then, that action can only be brought by the people who were victims of defamation. Airing fallacious events absent direct defamation is called ‘entertainment.’ CNN isn’t a news network, it’s a scripted reality show which is protected by the First Amendment, just the same.

CNN when the shooters are black we don’t report it.
Here it is.
Why in 24 hrs they aren’t showing who the shooter was.
https://www.tigerdroppings.com/rant/politics/ladies-and-gentlemen-brandon-scott-hole/95971454/

I concluded the mass murderer was not a white devil by about 8 AM this morning.

Either most of the victims were white or the Dems and race baiters don’t want riots at this time, for some reason.