Pre-registration is required. The 1619 Project, which aims to falsely rewrite American history, has found its way into our education system. This solutions-based discussion will address what can be done to push back and rescue our history and education. 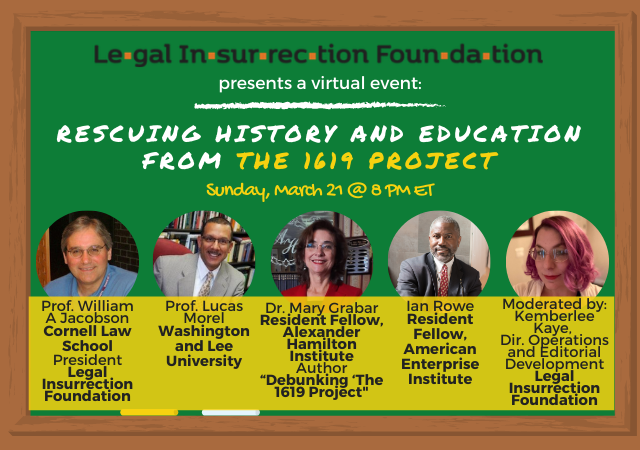 We’re excited about our next virtual event: Rescuing History and Education from The 1619 Project. Pre-registration for this event is required.

The 1619 Project, which aims to falsely rewrite American history, has found its way into our education system. We’ve catalogued The 1619 Project here since its publication. What’s going on? What can be done? And how we can we be involved? This solutions-based discussion will answer those questions and more. The panel discussion will include a Q&A portion. We welcome you to join in the discussion, but to do so, you’ll need to register by clicking the button beneath.

Professor Morel arrivedat W&L in July 1999 from Siloam Springs, Arkansas, where he had taught from 1994 to 1999 at John Brown University. He also teaches in the Master’s Program in American History and Government at Ashland University in Ohio, summer programs for the Claremont Institute for the Study of Statesmanship and Political Philosophy, and high school teacher workshops sponsored by the John M. Ashbrook Center, the Gilder-Lehrman Institute, and the Liberty Fund. In 2008-09, he was the Garwood Visiting Research Fellow at the James Madison Program in American Ideals and Institutions at Princeton University. Prof. Morel is a trustee of the Supreme Court Historical Society, former president of the Abraham Lincoln Institute, a consultant on Library of Congress exhibits on Lincoln and the Civil War, was a member of the scholarly board of advisors for the Abraham Lincoln Bicentennial Commission, and currently serves on the U.S. Semiquincentennial Commission, which will plan activities to commemorate the 250th anniversary of the founding of the United States of America. He has written for the “Los Angeles Times,” “Christian Science Monitor,” and “Richmond Times-Dispatch,” and recently completed a book titled “Lincoln and the American Founding” for the Concise Lincoln Library Series of Southern Illinois University Press (to be published July 4th, 2020).

Mary Grabar, author of Debunking Howard Zinn: Exposing the Fake History That Turned a Generation against America (2019), earned her Ph.D. in English from the University of Georgia in 2002, after working in advertising and as a free-lance writer. While holding a series of positions as an instructor, the last in the Program in American Democracy and Citizenship at Emory University, she wrote articles about the corruption of education, including by Howard Zinn, and founded the nonprofit Dissident Prof Education Project (dissidentprof.com). In 2014, she became a resident fellow at the Alexander Hamilton Institute for the Study of Western Civilization in Clinton, New York. Her next book, “Debunking ‘The 1619 Project’” (Regnery) is scheduled for publication in summer 2021.

Ian Rowe is a resident fellow at the American Enterprise Institute, where he focuses on education and upward mobility, family formation, and adoption. Mr. Rowe is also the cofounder of Vertex Partnership Academies, a new network of character-based International Baccalaureate high schools opening in the Bronx in 2022; the chairman of the board of Spence-Chapin, a nonprofit adoption services organization; and the cofounder of the National Summer School Initiative. He concurrently serves as a senior visiting fellow at the Woodson Center and a writer for the 1776 Unites Campaign.

Until July 1, 2020, Mr. Rowe was CEO of Public Prep, a nonprofit network of public charter schools based in the South Bronx and Lower East Side of Manhattan. Before joining Public Prep, he was deputy director of postsecondary success at the Bill & Melinda Gates Foundation, senior vice president of strategic partnerships and public affairs at MTV, director of strategy and performance measurement at the USA Freedom Corps office in the White House, and cofounder and president of Third Millennium Media. Mr. Rowe also joined Teach for America in its early days.

Mr. Rowe has been widely published in the popular press, including in the New York Post, The Wall Street Journal, and the Washington Examiner. He is often interviewed on talk radio programs. He is also the author of a forthcoming book tentatively titled “Agency” (Templeton Press), which seeks to inspire young people of all races to build strong families and become masters of their own destiny.

Mr. Rowe has an MBA from Harvard Business School, where he was the first black editor-in-chief of The Harbus, the Harvard Business School newspaper; a BS in computer science engineering from Cornell University; and a diploma in electrical engineering from Brooklyn Technical High School (Brooklyn Tech), one of New York City’s elite public schools, which specializes in science, technology, and mathematics.

Kemberlee, her husband, their daughters, and their son live in her native Houston, Texas.