“At this point last year, Portland had seen just one homicide. This year, that number is 20, with 208 shootings in the city so far.” 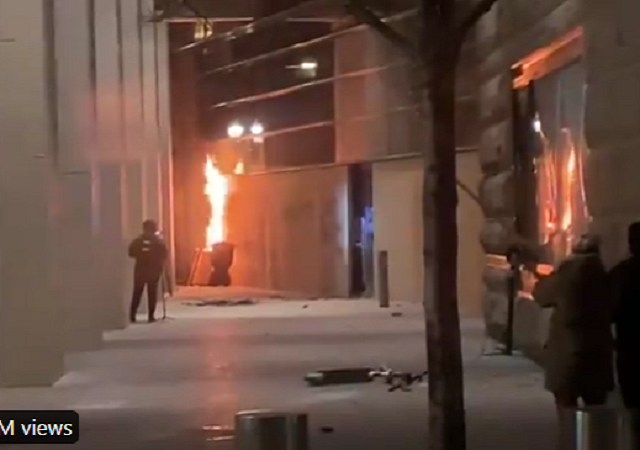 It has been almost a year since the radical left began acting out nightly in the city of Portland, Oregon. Last spring, Mayor Ted Wheeler tried to appease the mob by advocating for the defunding of police.

Now crime is surging, and many people who live there are out of patience.

The crime surge is serious. Zachary Faria writes at the Washington Examiner:

Portland cut police funding and got a 2,000% surge in murders

Last June, the city of Portland, Oregon, hopped on the “defund the police” bandwagon. Now, it is flooded with gun violence, and the mayor is already backtracking from his support for the cuts.

Mayor Ted Wheeler has requested $2 million in emergency funding for the police department, pointing directly to the surge in gun violence. At this point last year, Portland had seen just one homicide. This year, that number is 20, with 208 shootings in the city so far.

The city is a war zone. Meanwhile, the National Guard is protecting Washington, DC, from no one.

Overnight on 12 March, #antifa gathered to riot in NW Portland. They began smashing up an apartment building before police quickly created a perimeter & boxed them in. Antifa were found carrying guns, knives, hammers & other weapons. 13 were arrested. https://t.co/f2WXZmVFBB pic.twitter.com/kq0uymBsj9

Portland Police arrested 13 at an #antifa riot on Friday. The arrestees were found carrying illegal guns, knives & other weapons. Some are serial arrestees. The DA has already announced some charges are dropped. Read my new report cowritten w/@MiaCathell: https://t.co/YMydrIisS3

It’s amazing how long people have put up with this.

Elected officials and community leaders in Portland, Ore., joined together on Monday in calling for an end to the violence, destruction, and intimidation by far-left anarchists who have spent nearly nine months wreaking havoc in the city amid ongoing protests against racism and police brutality.

“The community is sick and tired of people engaging in criminal destruction and violence and doing it under the guise of some noble cause,” Mayor Ted Wheeler said during a news conference, according to the Associated Press.

While the city has been the site of a number of peaceful protests in the wake of the death of George Floyd, a black man killed by Minneapolis police during his arrest in May, officials say small groups of anarchists have continued to break businesses’ windows, threaten residents and assault police.

“The misguided and miseducated anarchists reject civility and instead intentionally create mayhem through criminally destructive behavior tearing up our city. This must stop,” former state Senator Avel Gordly said.

“I say to them today, ‘Stop you are not helping, you are hurting black people,” added Gordly, the first Black woman to be elected to the Oregon State Senate.

There is no excuse for what we have witnessed in Portland over the last year.

If Ted Wheeler can’t put a stop to this, he should step aside.

Where is the propaganda machine claiming the is insurrection or insurgency?

Mostly peaceful protests against white supremacy and Trump, who is causing the border crisis, which is not a crisis, but if it is, it’s definitely Trump’s fault, as is white supremacy.

Trump is orange. Our first Orange-American President. Orange you glad that he’s not a People of White? The horror.

“Elected officials and community leaders in Portland, Ore., joined together on Monday in calling for an end to the violence, destruction, and intimidation by far-left anarchists…”

Wow! That is really tough talk and the violence will immediately cease I am sure.

They could end this in a day if they wanted to so these dems are effectively endorsing the violence. They do not care about the “many people” or how they feel. This is what a Marxist revolution looks like. The “Elected officials and community leaders” are traitors and enemies of freedom and the USA.

Talk, that’s all they’ll ever do. They’re all wealthy limp wristed liberals afraid to admit what it would take to straighten this mess out. They’re all going to lose fortunes and would rather move on and start over than do anything about clueless, weak democrats, ANTIFA, and BLM.

The only thing that is keeping Portland alive is the influx of Kalifornians who are escaping an even worse hell hole. They are keeping home sales and rent increases at and often above the current level. Business properties, on the other hand, are really starting to tank and to a greater degree the closer they are to the central city core. The homeless have become the proverbial “black family” and are moved around by the police to specifically target neighborhoods.

Some time last week all of the businesses in my neighborhood had white envelopes taped to the door which were labeled “Confidential.” I don’t know what was in them as I am someone who respects private property, but my guess is either a solicitation offer to buy the property now that prices and desirability have been driven down by unrelenting tagging, or, an invitation to join a neighborhood coalition to combat the selective targeting of the street.

Interestingly, a local Chase branch completely boarded the facility a few months ago, sometime after the election. Every piece of glass was covered by plywood, and a friend who banks there said it was like entering a tomb. But last night, I noticed that all of the plywood had been removed, as if the hurricane had passed. I need to ask the owner of the mochahut if he got a letter, maybe not as he rents, and if so, what was in it.

Just who do these “anti-fascists” think they are fighting? I have never thought of the Pacific Northwest as a hotbed of fascism.

I could easily see a drop in violent behavior, if the DA would stop DROPPING. THE. CHARGES.

Once a few get punished, the rest – should – get the message. If not, repeat as necessary.

The protests in N.O. stopped after little to no pushback from the City.

It only came to a head when the paste eating morons, dislodged a bust of John McDonough from its pedestal in front of City Hall and threw it in the Mississippi River. That’s when the “leaders” of the removal of the bust were charged.

The mayor also went after a group of individuals who recovered the bust from the river, because reasons.

She’s going to be one and done after this, with her out of touch, draconian lockdowns of businesses in the CBD and ordering extensions of same while she’s in the Caribbean.

Exactly. The Far Left keep committing domestic terrorisminsurrection, getting arrested, and then the DA drops the charges. When the government is supporting terrorisminsurrection why would those committing it stop what they’re doing? They have a free pass to do so. And notice the MSM’s news blackout on the matter. Mostly peaceful rallies or protests by conservatives, Christians, andor Trump supporters are dangerous events, insurrection, or terrorism, but actual violence by the Left? Nothing to see here keep moving!!!

The blacks are just unwitting targets and cannon fodder in this battle.

I personally am more concerned with the homeless and the day that they realize that the system can’t punish them, combined with rampant meth usage. I don’t think that it could get worse faster even if .gov were overtly trying to create a crisis, which the evidence seems to support.

My game plan, based on a number of factors, is to exit Oregon for Ohio in the summer of 2022. I am not sure that I will make it that long here.

A few years ago I would see a police cruiser on an hourly basis. I now go entire days without seeing one. Frankly I am surprised that things are holding together as well they are. On another note, my travels take me past the two major gun stores in the area and they always have a line of 6 or more outside waiting their turn to get in.

Sporting Systems is just across the border and often has ammo in stock too.

The left is destroying this country.

I believe we are not far from inflation spiraling completely out of control, coupled with a depression, leading to widespread civil unrest. It may make the Weimar Republic or Zimbabwe look good by comparison .

I am seriously thinking of bailing completely, and retiring to someplace like Costa Rica, or Portugal, or the south of France (Pau or Bordeaux), where my retirement money will go a lot further.

How can the public tire of Antifa’s violence if Antifa doesn’t exist or is just an idea?

And how do you know all the violence isn’t being caused by Boog Bois? Given the testimony on record of people in the Chauvin jury pool, the jury is still out on that “fact.” Just goes to show that there is no Democrat lie so incredible that many brain-dead Democrats won’t swallow it.

SeiteiSouther is correct the Multnomah County DA is dropping something like 90% of the charges, even though he claims he is tough on property damage and assault.

Governor Brown and the Attorney General do nothing.

Some Portland Police had been deputized as federal agents. The US Attorney was actively pursuing individuals that assaulted the deputized officers. Of course the Biden administration is busily dropping federal charges that were pursued by Trump Administration US Attorney.

For years I have been predicting Oregon would become the first third world place in the continental USA. They are on their way.

Repeat the lesson until it’s learned.

Smash away, bash away, while standing tall.

Repeat the lesson as many times as you need to.

Kate Brown should’ve sent the national guard into Portland months and months ago, but Brown and Wheeler don’t want to use troops on their own leftwing constituency. And the local media in Portland, if they cover the nightly rioting at all, report that most of the violence is coming from right wing protestors like the “proud boys,” whoever they are.

Welcome to America as envisioned by Dementia Joe the communist pedophile…

““The community is sick and tired of people engaging in criminal destruction and violence and doing it under the guise of some noble cause,” Mayor Ted Wheeler said during a news conference, according to the Associated Press.”