Carjackings Surge In D.C. – Over 100 So Far In 2021, Including Murder of Pakistani Immigrant By Teens

Carjackings Surge In D.C. – Over 100 So Far In 2021, Including Murder of Pakistani Immigrant By Teens

“According to MPD, there have been 101 carjackings so far this year compared to just 22 at this time last year.” 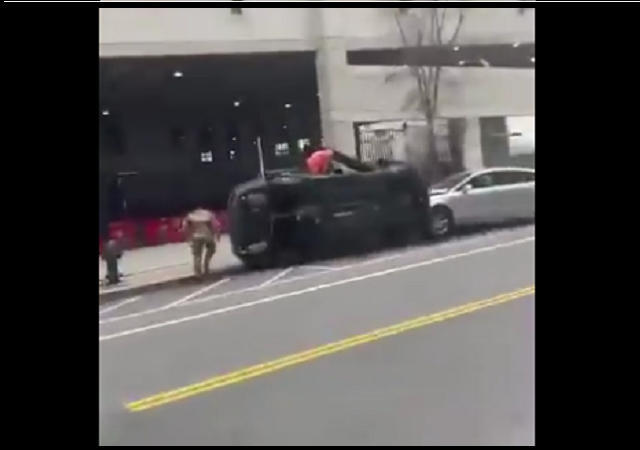 The horrific carjacking last week that took the life of a Pakistani immigrant working as an Uber Eats driver to support his family shocked the nation.

It turns out this particular crime is way up in Washington, DC.

According to ABC News in DC, there have been over 100 carjackings so far in 2021.

Reported carjackings in D.C. from January-March, according to @DCPoliceDept:

According to NBC News in DC, the perpetrators are typically young people:

D.C. is seeing a spike in carjackings as well a spike in juvenile suspects.

In March alone, five juveniles have been charged with carjacking. A 12-year-old boy is accused in a spree of incidents in Northeast. On Wednesday two girls, ages 13 and 15, were charged with murder after police say they carjacked an Uber Eats driver near Nats Park. Over the weekend, two 13-year-old boys were accused of multiple carjackings in Northwest.

According to MPD, there have been 101 carjackings so far this year compared to just 22 at this time last year. Last year, 60 juveniles were arrested for carjacking. In 2019, the number was 24.

Just this weekend, two teenage boys were arrested for this.

A pair of 13-year-old boys was arrested over the weekend for two separate armed carjackings that happened Friday, according to the Metropolitan Police Department.

Police say the first carjacking happened around 7:10 p.m. in the 300 block of K Street, Northwest. The two boys approached the driver, one brandishing a handgun, and told them to exit the car. The victim got out of the car, and the two boys tried to drive off in the stolen car, but couldn’t. They took off on foot, according to police.

About 90 minutes later, MPD received another call for an armed carjacking at the 400 block of O Street, Northwest. This victim was also told to exit their car by two suspects, while one showed a gun. This time the two suspects were able to drive off in the car.

Maybe defunding the police wasn’t such a great idea. Also, perhaps this is a more pressing issue than statehood for DC.

Yes, I know there will be “good, couldn’t happen to nicer people” comments, but the carjacking problem is also happening in DC’s immediate suburbs. Notice in the articles how many of the teenagers being arrested are crossing state lines, which would allow the feds to prosecute? They absolutely do not care. And given the “leadership” in DC and said suburbs are entirely Democrat, coupled with head prosecutors who are on social justice missions, it’s only going to get worse.

BTW, don’t link to WUSA9. That outfit is so biased to the left it’s embarrassing. The only decent thing they have is the weather department.

Let me guess, Trump’s fault? DC wants to be a state? Maybe it should first work its way out of becoming a violent shithole.

Thinking you can drive your car in peace? That’s just your white privilege. These are just misunderstood bored kids who are given no choice by a society dominated by millions of white supremacists. They need an outlet for their frustration. In short – it’s not them – it’s you.

How do you know? Because all those arrested for carjacking in DC are black. That is statistical proof of racism. 100% blacks arrested when blacks only make up 70% of the population. Why aren’t 30% of other races arrested – there’s your proof. And If you try that excuse that maybe all the car-jackings in DC are done by blacks – that’s just doubling-down on racist and you must be a white supremacist. Don’t you dare try to say “all lives matter” – it’s racist – and only a white supremacist would think that. Now you see why we have to defund the police?? Isn’t it obvious? If it’s not obvious – consider yourself a white supremacists.

And what are you doing out – driving around – when you should be cowering at home and obeying the lockdown – so it’s you who should be arrested and jailed. You’re the criminal.

How is this possible with so many national guard on the streets?

Keep the guard in DC, and have them stay until carjackings stop.

The National Guard is in a very small area. And quite frankly, they’d probably be hesitant to intervene since they are not local law enforcement. A lot of the National Guard members currently stationed in DC are from elsewhere.

I thought racism ended in DC when they painted BLACK LIVES MATTER on that street. Oh well, I guess racism is STILL causing those precious young kings to carjack people. When will you evil Republicans ever stop your foul wicked deeds?

Let’s all welcome the car jack state into the union.

Now….now…car jackings are just “Uber by other means” for these impatient future (present?) Democrat voters. I like the excuse that since the lockdown for covid kids just want to steal cars…since other forms of theft are not available.

A lot more people are at home, should you be considering burglary as your crime of choice, and they’re a lot more desperate than in the past. Desperate people don’t react in a measured fashion. Plus, even in DC you can shoot intruders in your home.

DC will need a new name in statehood, for two reasons:

1. Washington is already taken.
2. The right-thinking folks in DC don’t actually like the name “Washington”.

May I suggest “CarJackia” as a possible new name?

Whatever they call it, it will be the state of Depravity.

This is what happens when you defund the police and refuse to enforce the law.

What can we reasonably infer from the fact that the Fake Stream Media does not mention the race of the perpetrators?

@Grims … Bull Shit … The problem is their character.

Predictably, those two black sociopath teens who murdered the senior-age Uber Eats driver won’t be charged as adults. What else is new — the Dhimmi-crats’ perpetual coddling of criminals and their opposition to retributive punishment that matches (or, at least acknowledges) the gravity of the crime represent orthodoxies as immutable as any law of physics.