Earth-shattering in its tone-deafness 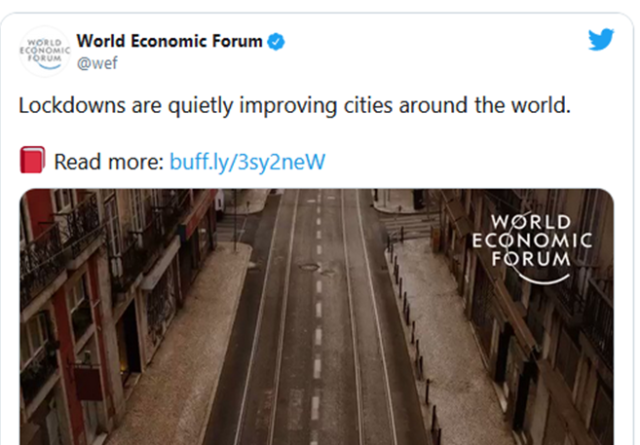 Many places around the globe still reel from the fallout of lockdown, including the business-crushing devastation and consequences on mental and physical health of communities around the world.

However, the Work Economic Forum took the opportunity to share its excitement about findings from an international group of seismologists that measured a drop of up to 50% in so-called ambient noise generated by humans travelling and factories humming post-lockdowns.

Earth had its quietest period in decades during 2020 as the COVID-19 pandemic significantly reduced human activity and its impact on the planet’s crust, according to scientists working on a global study.

And while the geologists were targeting the smaller earthquakes in their research, the Forum’s pre-release tweet summarized the study with a sweeping humanity-hating tweet only a group of global elites could dream up.

As a reminder, the World Economic Forum (WEF), is an international NGO, supposedly “committed to improving the state of the world by engaging business, political, academic, and other leaders of society to shape global, regional, and industry agendas.” It’s the group that holds their annual “Great Reset” meeting at the end of January in Davos, Switzerland.

This is one of the creepiest tweets by the WEF. I guess they would prefer the dead silence? Imagine that, who would have guessed?

Meanwhile people are dying through not receiving treatment for non covid illnesses, suicides are increasing, but I guess that fits your depopulating agenda.
The global elite are using the citizens of world as part of their experiment, more of us need to wake up.

I feel like I’m predicting that in the future we will have lockdown through the year to help the environment. Come back to what I’ve said in 5 years and see if I’m right ?
The media already getting you ready for this idea

WEF: “We may have destroyed hundreds of cities and countless livelihoods and forced a generation into poverty, but hey at least it’s quiet now!” *clinks champagne*

Meanwhile, the WEF elites seem substantially less concerned about the pandemic of long-term mental and physical health problems being created by the response to the pandemic.

Data from the CDC shows about 40% of Californians reported struggling with symptoms of anxiety last month. The state is among the top five worst for anxiety nationwide.

“As we get more people who want the service, it’s getting harder to maintain,” said David Bain, executive director of the National Alliance on Mental Illness Sacramento chapter.

Bain said he’s seen a notable increase over the last year with people turning to the non-profit for help. Psychiatrists say children and seniors are among those who have it the worst.

“It’ll take longer to get out of this pandemic than the COVID pandemic,” Bain said.

Lingering long-term, some dealing with loss and grief while others just re-acclimate to life and get over new anxieties.

The WEF quip was truly earth-shattering in its tone-deafness.

No surprise. Weird leftist from Gates on down fantasize about a planet without people – except themselves, of course.

The covid scam was their scam to begin with.

Gates has turned out to be the most sinister asshole this side of Soros.

That’s what happens when you have all the money in the world but can’t get an attractive woman to have sex with you, outside of Epstein’s pedo island.

Bill Gates REFUSES to reveal why he flew on Lolita Express with Jeffrey Epstein four years AFTER his release from prison while the billionaire was still chairman of Microsoft:

It reminds me of Tom Clancy’s book Rainbow Six.

“All the time in the world! Aaargh, moi ochki!”

The World Economic Forum is comprised of very wealthy people who happily embrace Malthusian theories because they expect themselves and their families to be insulated from the consequences of policies designed to prune the luxuriant growth of the human race.

Also, there is money in building, but the money from chaos is faster.

Perhaps a glimmer of hope in educating smugnoramuses who have their heads up their butts, and have enabled evil being perpetrating around the world:

Restrictive mandates that did not change observable viral contagion and disease progression across borders. Denial and stigmatization of inexpensive, low-risk, effective treatments that have reduced excess deaths and normalized community immunity (i.e. mitigating safe sanctuaries). Planned Parent/hood before, during, and after… and collateral damage on a forward-looking basis.

The masks come off and people are surprised? You have just had a look at the Elite Establishment utopia.

The Establishment elites have been actively attacking the populist middle class by destroying their economic base and society, for decades. Why? Because the establishment does not need them. The Elites only need a few million drones to manufactured the things that the elite needs to be comfortable and to grow enough food to feed them. The rest of the population is nothing more than a nuisance. After all, they clutter up the scenery, need to be taken care of and, if they attempt to rise above their station, they are a potential threat.

They only think they don’t need them. Middle class ambition and innovation are the reason they’re sleeping in climate controlled mansions and driving Ferraris today, as opposed to cold drafty stone castles and horse-drawn carriages.

You fail to understand the mindset of the Elite Establishment. They do not want innovation. If it comes along, they will welcome it, if it benefits them. Otherwise, they exist completely in the now. And, innovation, if not strictly controlled, is dangerous to the Elite.

This is an old story. Sadly, not enough smugnoramuses running around know how it ends:

The Elite and Their Privileges in the Soviet Union:
https://communistcrimes.org/en/elite-and-their-privileges-soviet-union

Have the ones so many refer to as “the elite” (they aren’t, really) given thought to who will grow their food, repair or build their homes, maintain their (no doubt imported) cars, and keep their electricity on and reliable?

It’s hard for me to understand how such an accompanying photo was selected to run with the message – devoid of life, somber browns and black, shuttered buildings. If I had been tasked with sending this out, I would have selected a photo showing a sunlit street of a modern, vibrant city, with a scattering of (masked) pedestrians and maybe even a vehicle or two. That is, a cityscape without throngs of people and without bumper-to-bumper traffic, but still showing life and, well, evidence of an economy. What was posted looks like a city that’s been deserted due to a nuclear accident.