“Everything that the establishment has done is a conspiracy too. Our job is to figure out if it is good or bad…” 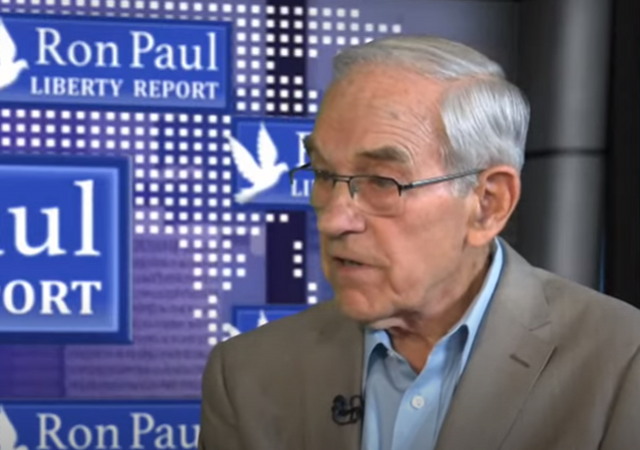 Former congressman and presidential candidate Ron Paul recently spoke about the controversy surrounding Rep. Marjorie Taylor Greene of Georgia. He suggested that expelling people from Congress for believing in conspiracy theories sets a dangerous precedent and represents a threat to free speech.

He also makes an excellent point about who gets to define what is and is not a conspiracy theory.

After all, we just spent four years listening to Democrats and their media allies pushing Russia collusion. Does that not qualify as a conspiracy theory?

“How are we going to deal with this young Republican woman who is not conventional. I don’t know the details of all her beliefs… But evidently, she has stirred up a controversy,” Paul explained. “It has been decided, the Democrats have really piled on, and if it is difficult to defend her, the Republicans have to join in too and go after and criticize her for these beliefs.”

“This whole idea that there is a ‘conspiracy’ … I work from the assumption that everyone is a conspirator. Are you defending A issue or B issue, in a way, we are conspirators for liberty. We don’t want to do it in secret, we want our stuff broadcast,” Paul said. “How the Federal Reserve is run is a secret — I think that’s a big conspiracy… Everything that the establishment has done is a conspiracy too. Our job is to figure out if it is good or bad… You could use the lockdown as an example.

The topic is covered over the first ten minutes or so of this video:

I have to say, it’s fun watching Democrats clutch their pearls over conspiracy theories. Now seems like a good time to remind people that not too long ago, many Democrats believed that Bush was complicit in the 9/11 attacks.

More than half of Democrats believed Bush knew

I’ve been looking for a good analogue to the willingness of Republicans to believe, or say they believe, that Obama was born abroad, and one relevant number is the share of Democrats willing to believe, as they say, that “Bush knew.”

There aren’t a lot of great public numbers on the partisan breakdown of adherents to that conspiracy theory, but the University of Ohio yesterday shared with us the crosstabs of a 2006 poll they did with Scripps Howard that’s useful in that regard.

“How likely is it that people in the federal government either assisted in the 9/11 attacks or took no action to stop the attacks because they wanted the United States to go to war in the Middle East?” the poll asked.

Somehow that was never described as a dangerous threat to our democracy.

When the squad doesn’t suffer repercussions it can only lead to bad things happening.

Maxine Waters told people to confront Trump administration members and their families in public and in restaurants, get in their faces, etc.
Then there’s good old Hank Johnson……….

Those are pretty shocking figure re Democrats believing some kind of 9/11 conspiracy.

The idea that the Swamp Mandarins get to decide whom the people may elect to represent them is what’s messed up our politics in the first place.

Originally, parties were conceived of as private political clubs, who would put candidates up for election according to whatever their principles were. The mistake was when we began to consider them integral branches of government in themselves, such that they were given powers to control things like who gets to participate in presidential debates, primaries, etc.

(Most people think presidential debates are run by some “theoretically” unbiased nonprofit, like the League of Women Voters. Not even. They are a wholly owned circus of the DNC and RNC, and funded unconstitutionally by the federal government. That’s why Libertarians, Greens, etc. “never seem to” make each year’s inclusion threshold. This is not a secret, it’s just that nobody bothers to point it out.)

QAnon was just the excuse for the Dems to exercise their raw political power, abetted by Blue Pill Roll Over Party Congress critters. Now that the precedent has been set they will use it again and again whenever they want to make another example of a Republican. My guess is Gaetz will be next.

I had a high-school buddy trot out the “Jewish Space Laser” jibe. I asked him whether or not this was stranger than claiming that sending troops to Guam would cause the island to tip over and capsize, or that NASA sent men to Mars.

Is there a black conspiracy to dominate other people in America? Are Democrats egging them on as cover gain more power? Will this ultimately lead to backlash

“Empower the speech police?” They’re already empowered. Ron should know that, Twitter banned him for nothing but being Ron Paul.

Of course, Adam Schiff was perhaps the biggest conspiracy proponent of all time. Why is he still on committees?

Democrat’s don’t give a shit.

Once again they are calling the RINO bluffs.

2) Even IF they lose control they know goddamn well the RINO cucks will never, EVER, do this to a Democrat.

Oh, and as a follow-up, if the RINOs think this is going to stop with Greene, they are literally too fucking stupid to live.

The idea that the majority party gets to dictate who can or cannot be seated on committees by the minority party is UTTERLY INSANE.

They will throw literally anybody they don’t like off committees.

Fucking RINOs are just too fucking stupid to live.

“they are literally too fucking stupid to live.”

The squad is even dumber. Too dumb to hold office.

There needs to be a pretty strict min IQ standard for immigration. Policy should also take into account point of origin average IQ, someone can have an acceptable IQ, but still be likely to produce low IQ children.

Surely America has had enough experience with such populations to know that they will not mesh well and thrive in our society.

Why couldn’t McConnell get the Republicans to defend one of their fellow Republicans? The threw her to the wolves and now no one is safe. Especially disheartening is that there are plenty of Dems who deserve this punishment but will never receive it.

1. WTF has McConnell got to do with it? Why are you dragging his name in?

2. The Republicans did stand by her. All but a handful, despite the fact that objectively she is a nut and in normal circumstances should have been thrown to the wolves. They stood by her because of the blatant double standard, and they were right to. But it’s understandable that a handful of them felt it was more important to stand by their principles regardless of what the Dems do.

The Dems don’t CARE. They’re more than happy to exercise the unprecedented power of using their majority status to remove annoying Republicans in committee positions because they know the press will happily parrot every one of their lies about it, and secondly the Republicans will *never* have the nerve to do it back to them.

Case in point: Eric Swalwell, Chinese spy associate and STILL on the Intelligence Committee. Google is even happily covering for him, because if you Google his name, ‘Chinese’ doesn’t show up until way down on the list.

Expelling?! Who’s talking about that? Nobody is being expelled. Not only does it take a 2/3 vote to do that, but the Congress has a long-standing view that members may only be expelled for offenses committed during the current term. So long-standing and entrenched that the Supreme Court, while carefully not endorsing it, has taken official note of it, and has written that it’s unlikely that 2/3 of the house would vote to expel a member for an offense committed earlier.

Yet there was Ted Kennedy. You can get someone killed and not be expelled, but you can be a conspiracy theorist and be taken off committees. What congress critters consider actionable (Trump’s speech) and not actionable sometimes defies understanding.

What do you mean “yet there was Ted Kennedy”? He was not expelled. There wasn’t even a motion to expel him. Which comports with Congress’s long-standing view that members can’t be expelled for anything they did before the last election.