“Amen” is not a gendered term, you idiot. 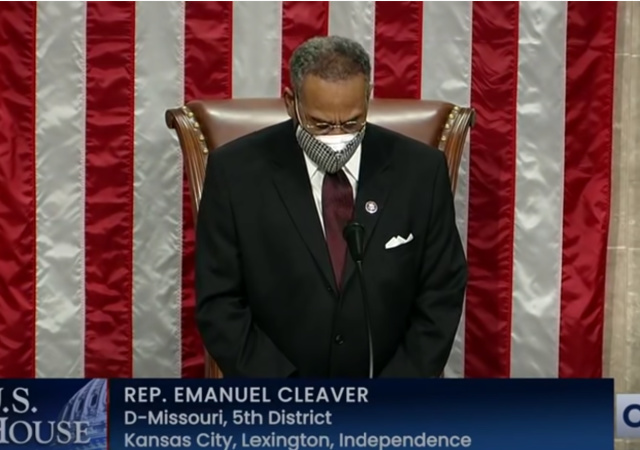 Rep. Emanuel Cleaver (D-MO) attempt at being “woke” and clever failed miserably on the first day of the 117th Congress.

Side question: Did Cleaver wear two masks? I cannot with these people.

Cleaver ended the prayer with “A-man. And A-woman.”

But Cleaver forgot something important: Amen has nothing to do with gender or sex!

I cannot believe I have to write out the definition.

How about good old Dictionary.com:

It just goes to show you don’t have to be smart to be a member of the government.

I thought we reached peak idiocy in 2020.

Wow. Just… He has no idea what it means. Clearly.

Stupidity has no lower bound.

Nor, I suspect an upper limit.

The Leftards enjoy proving themselves dumber than a box of rocks, the mental disease of Leftism is more contagious than the Chi com Wu Flu and renders it’s victims functionally braindead.

(downvoted by mistake – meant to hit reply – should be a way to undo). Anyway, seems everyone has missed the additional outrage (ha ha) that he put a-men before a-women and left out the other 70 genders.

To be sure, shouldn’t he have said “Awomen”?

Perhaps so. But, he’s probably semi-literate at best.

It’s a shame. He was really good in Leave It to Beaver.

And I always wondered why they call it ‘MENstruation’…

But don’t ask me to explain how that works. I’m a man, so by definition I couldn’t possibly understand — which doesn’t stop her from expecting me to and holding it against me when I don’t.

Somerville just a woman Splaine it to you.

Most members of Congress certainly are!

At least Guam hasn’t topped over yet nor the Apollo landing sites on Mars disturbed. All that money spent on stealing the elections and this is the best that they can do? At least he appears to represent his constituants.

And afterward, the lefties lined up to comwomend him for his bravery.

But when you write “women” there’s still that 3 letter combination “men”, so you have to add “wo” again, so wowomen, wowowomen etc. It’s never enough.

It would be wonderful if the pun were intended to emphasize the importance of the individual.

“ All that money spent on stealing the elections and this is the best that they can do? ”

Soft bigotry in action when such stupidity and arrogance in Congress are not only permitted but applauded . “Deformative Action” is the real term.

As for the legal system now in this election….I offer this:

The system is man-made and as such not perfect but now it is both inadequate and becoming more imperfect. Legal representation is now contingent upon correct ideology.

This is the level of knowledge I have come to expect from Methodist clergy.

They have totally forgotten “method and rule”.

Many clergy, if not most, are at least average intelligence, some highly intelligent. Others, however, go into the ministry because they aren’t able to be successful anywhere else.
.

“Amen”, אמן in Hebrew, comes from אמונה, “trust”, or “belief”. The underlying meaning of “Amen” is “you can trust this”, or in the US vernacular “you can take it to the bank”.

I don’t think it’s related to אמת, “truth”, but those who believe in the two-letter-root theory might see a connection.

Amen to that, but I’m pretty sure “awoman” comes from Shebrew.

משוגע is Hebrew for Democrat.

Bwahaha. I don’t know how to get Hebrew alphabet on my iPhone but another word transliterated would be “chazar”.

“Amen” is not a gendered term, you idiot.

I think you’re right, אמן is not gendered, because it’s not a noun, verb, or adjective. But the vast majority of Hebrew words are gendered; if אמן were one of them it still wouldn’t have justified this moronity.

For instance, the closely related אמונה, “trust”, is a noun, and is therefore gendered. So is אמת, “truth”. As it happens, they’re both feminine. There is no way to make them masculine without sounding like an idiot.

Oh, and according to Wiktionary I was wrong in my earlier comment. אמת and אמן are in fact related, and they both derive originally from the Egyptian goddess Maat, which is why they’re grammatically feminine. I’m not sure I buy that.

Well thought out. But totally wasted on Cleaver. You offer intekligence, he offers none. “Learned” is obviously racist .

Will Rogers said that every law passed by Congress was a joke and every joke in Congress became a law.

Emet, truth: what is concluded about something from the full range of known experiences with it — the beginning (of the alphabet), aleph, the mid-range, mem, and the end, tav; a sort of pan-spatiotemporal achronym, as it were, and thus metaphysically charming.

(Was Yehoshua’s “I am the Alpha and the Omega” informed by this verbal Hebrew/Aramaic wisdom?)

So, are the two terms cognate? Maybe as much as idolatoty and adultery: not morphemically by root, or orthographically by spelling, it seems, but close enough culturally as to overlap practically every day.

” … [T]he vast majority of Hebrew words are gendered; if אמן were one of them it still wouldn’t have justified this moronity.”

Exactly right. Anyway, I guess (the non-analogical, ungrammatical faux-neologism) “Awomen” is, for some Democrat-viewed “reason,” exempt from the strictures of the proposed corpus of New House Rules intended to eschew effete, nasty sexisms and promote a genderless descriptive universe. So obviously paradoxical, then — and ridiculous, were it not actually so patently totalistic and freedom-robbing.

Racist infidels and blasphemers! “Awoman” is obviously one of the 152,306,814,281 legally recognized genders!

Is just a little sanity in the world too much to ask for? Apparently so.

It’s good to know that there is a place to employ the mentally retarded. Its called “Congress”.

Are they demanding that the senior Senator from West Virginia change his last name?

Incorrect to be a Human any more, try Huwoman. (In about 3 weeks it’ll be done-deal).

No, because he prayed to brahma.

Not surprising the ignorance of the so called ”black” minority preacher man: remember the episode a few years ago, with the outrage over the sacred ”n word” uttered by some White educated person??

The ”n word” heard by the ”black” minority person was actually, the word ”niggardly”, but was too close to the sacred n word for the guardians of ”black” self esteem, so the careless White Man was fired for the grossness of using a word that sounded like the sacred n word.

You can research via google or duckduckgo the firing episode and check your collegiate dictionary for the meaning of ”niggardly”.

I live in Northern Virginia, outside the Emerald City of Odds (or oddities).

I distinctly remember the incident that you reference.

Just another case of how the vocabulary (and overall edjoomikayshunal understanding) of the average Leftist is, at best….

It would have improve by quantum leaps to aspire to even THAT level.

You misremember. David Howard was not fired, but after someone complained about his choice of words he voluntarily resigned and the mayor accepted his resignation. After the enormous backlash, including from leftist black leaders such as Julian Bond, the mayor offered him his job back. He declined, but accepted a different job in the same administration.

Being a Leftist can assume he has sold his religion and became a Leftist.

Is he any relation to 1960s civil rights activist Eldridge Cleaver? You know, the guy who invented “Cleavers” (aka penis pants)?

Eldridge Cleaver ended up becoming a Mormon and a conservative Republican. Then he fell into drug addiction and was arrested for burglary.

I used to ask myself who is voting for these asshats. Now I know. Nobody is actually voting for them. They’re Dominioned into office.

On another and (I think) more important tack …

He prayed to Brahma. (This is what I heard.)

Are we all Hindus now? I didn’t even know that was a monotheistic god, but if it is, I have not heard assertions that it’s the same as the God of Abraham.

He didn’t say Brahma was a monotheistic god. He said we pray in the name of the monotheistic god, Brahma, and all the other names that God is known by. That’s three separate items. Covering all his bases, so to speak, except he doesn’t actually believe in any of them.

“And, we pray that the Dhimmi-crats may find some means of casting aside their perennial, insufferable, narcissistic and self-congratulatory “woke” antics and attendant idiotic “woke” stunts.”

If you sup[port this detritus you need to rethink your life and give up your right to vote. You can’t cast an intelligent, informed vote.

Cleaver is an idiot. Unfortunately he represents the next district south of me. They made him mayor for a while, screwed up KCMO. He is unable to pay his taxes on his car wash. He got sued by his bank for not paying the loan ($1.5 million). For some reason his district keeps electing him.

STOP The World! I Want To Get Off! This insanity has no end.

He certainly lacks acumen and acuwomen.

Someone should check his pharmaceutical regiwomen and see if he can get some shelp.