The two friends had a major impact on the Church. 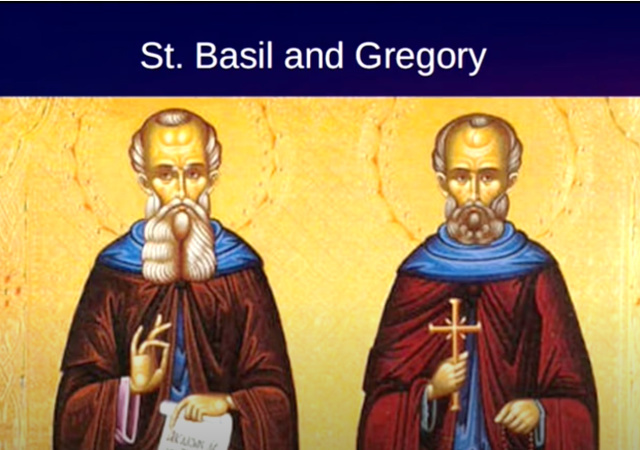 The ninth day of Christmas, which is January 2, belongs to two important 4th century Christians, who happened to be friends: St. Basil the Great and St. Gregory Nazianzen.

Basil came from a wealthy family who were Christians from the beginning. He received an extensive education, leading him to become a famous teacher and money of his own.

But the Church always called out to Basil.

Basil’s grandfather was executed and became a martyr before Constantine’s conversion. His sister Macrina also influenced him, especially after she became a nun and abbess, along with Eustathius of Sebaste was what pushed

The successful lawyer and teacher abandoned his career and took a vow of poverty.

St. Basil earned the title “Great” because of his devotion to learning “and constant activity, genuine eloquence and immense charity.” An absolute “giant” in the early years:

He was responsible for the victory of Nicene orthodoxy over Arianism in the Byzantine East, and the denunciation of Arianism at the Council of Constantinople in 381-82 was in large measure due to his efforts. Basil fought simony, aided the victims of drought and famine, strove for a better clergy, insisted on a rigid clerical discipline, fearlessly denounced evil wherever he detected it, and excommunicated those involved in the widespread prostitution traffic in Cappadocia. He was learned, accomplished in statesmanship, a man of great personal holiness, and one of the great orators of Christianity.

He was an influential theologian who supported the Nicene Creed and opposed the heresies of the early Christian church, fighting against both Arianism and the followers of Apollinaris of Laodicea. His ability to balance his theological convictions with his political connections made Basil a powerful advocate for the Nicene position.

St. Gregory was friends with St. Basil. He joined Basil’s “newly founded monastery,” which many believe was the first established in Asia Minor.

The friendship between the men broke down after Gregory was chosen as “suffragan bishop of Caesarea.” From Franciscan Media:

At 41, Gregory was chosen suffragan bishop of Caesarea and at once came into conflict with Valens, the emperor, who supported the Arians.

An unfortunate by-product of the battle was the cooling of the friendship of two saints. Basil, his archbishop, sent him to a miserable and unhealthy town on the border of unjustly created divisions in his diocese. Basil reproached Gregory for not going to his see.

When protection for Arianism ended with the death of Valens, Gregory was called to rebuild the faith in the great see of Constantinople, which had been under Arian teachers for three decades. Retiring and sensitive, he dreaded being drawn into the whirlpool of corruption and violence. He first stayed at a friend’s home, which became the only orthodox church in the city. In such surroundings, he began giving the great sermons on the Trinity for which he is famous. In time, Gregory did rebuild the faith in the city, but at the cost of great suffering, slander, insults, and even personal violence. An interloper even tried to take over his bishopric.

Gregory is known for his “defense of the doctrine of the Trinity.” I researched his thoughts, thinking it would be a few pages, but it is not. From EWTN:

WHEN did these come into being? They are above all “When.” But, if I am to speak with something more of boldness,–when the Father did. And when did the Father come into being. There never was a time when He was not. And the same thing is true of the Son and the Holy Ghost. Ask me again, and again I will answer you, When was the Son begotten? When the Father was not begotten. And when did the Holy Ghost proceed? When the Son was, not proceeding but, begotten–beyond the sphere of time, and above the grasp of reason; although we cannot set forth that which is above time, if we avoid as we desire any expression which conveys the idea of time (Theological Orations III.3).

TO us there is One God, for the Godhead is One, and all that proceedeth from Him is referred to One, though we believe in Three Persons. For one is not more and another less God; nor is One before and another after; nor are They divided in will or parted in power; nor can you find here any of the qualities of divisible things; but the Godhead is, to speak concisely, undivided in separate Persons; and there is one mingling of Light, as it were of three suns joined to each other. When then we look at the Godhead, or the First Cause, or the Monarchia, that which we conceive is One; but when we look at the Persons in Whom the Godhead dwells, and at Those Who timelessly and with equal glory have their Being [in] the First Cause–there are Three Whom we worship (Theological Orations V.14).

THIS, then, is my position with regard to these things, and I hope it may be always my position, and that of whosoever is dear to me; to worship God the Father, God the Son, and God the Holy Ghost, Three Persons, One Godhead, undivided in honour and glory and substance and kingdom (Theological Orations V.28).

They appear to be submerged in obscure sectarian mumbo jumbo. Sad.

Thanks. The early Church Fathers have such interesting stories!

” And this is the spirit of the Antichrist, which you have heard was coming, and is now already in the world.”

John warned of arianism, ect. before its progenitor, Arius, was even born, or provided a name for the heresy to deny the diety of Christ.

Cliff’s notes for the nascent Christian Church, the Nicene Creed, was precisely the weapon needed to combat these heresies.

Not a Catholic, I’m unfamiliar with Gregory or Basil, but thanks to Miss Mary, I have a new found appreciation for these giants of the Faith.

That is all. Merry Christmas!

In addition to Saint Basil the Great and Saint Gregory of Nazianzus, there is a third, Saint. Gregory of Nyssa. He was a brother of Saint Basil. Each is a Doctor of the Church and collective are known as The Cappadocian Fathers.

They have been characterized as Saint Basil “the arm which acted,” Saint Gregory “the mouth which spoke,” and Saint Gregory of Nyssa “the head which did the thinking.” There is a summary outlining the life of each, their contributions, and importance to the Church. (It’s not lengthy)