Trump Tells Supporters He Won’t Concede, Wants to ‘Primary the Hell Out’ of Republicans Who Don’t Fight

Trump Tells Supporters He Won’t Concede, Wants to ‘Primary the Hell Out’ of Republicans Who Don’t Fight 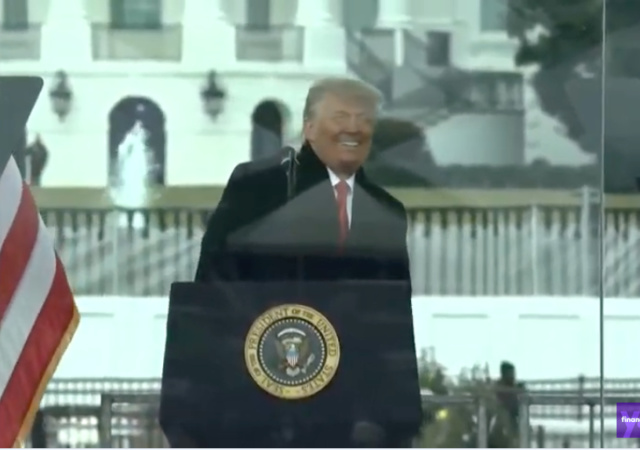 President Donald Trump is addressing his supporters at the Save America Rally in Washington, D.C.

Anything happening in D.C. wouldn’t be valid without a protest, right? Trump showed up at noon.

Trump said that “we will not concede.” He also continued to put pressure on Vice President Mike Pence to return the votes back to the states to re-certify the election. Except Pence cannot do that.

Jay Sekulow, Trump's lawyer and a constitutional lawyer, has repeatedly said that Pence can not do that. https://t.co/M5zeXnbxtP

Trump will also march with the people.

Tells the media to turn their cameras toward the crowd because he wants his supporters "to be recognized by the fake news media." pic.twitter.com/4hcf3UGfc8

President Donald Trump will speak at the Save America Rally at 11 a.m. ET.

People were arrested for the following in Washington on Tuesday by DC Police:

Trump, please just go away. You rallies are an embarrassment now.

2016 was wonderful and you had a number of fantastic accomplishments:

On the flip side, you allowed out of control spending for 4 years and badgered the Fed to take on more and more disastrous policies that will crush my children and grandchildren with debt and/or a debased currency and rampant inflation.

In the end your narcissism has cost this country dearly and led to the 2018 rout in the house, your own loss this year and loss of the Senate (and perhaps GA for years to come) yesterday. It is an unmitigated disaster for our country and most of your accomplishments (judges aside) will be undone by the midterms. Quite a legacy you crafted.

So please stop making this all about you, it has cost us all dearly. Just go away.

Democrat sore losers resort to insane levels of fraud, and you like that result.

I am glad that we have Trump in office right now, because he is willing to stand up to the people hell-bent on turning this country into Venezuela.

Where do you read that I like the result?

Maybe, but you cannot prove it. Or maybe it was just massive turnout against Trump. 4 years ago he won WI, MI and PA by surprise and by a razor thin margin. This year he lost those by a thin margin. It is within the margin of reasonableness that he just lost.

I wanted him to win. But his non stop tantrum since 11/3 culminating in the absurd call to the GA SoS cost us the Senate and I am pissed off about that.

Keep downvoting my comment and indulging in your stolen election fantasies while Pelosi and Shummer remake our country. It is an outcome that never, ever should have happened if only Trump had put all his energy into saving GA instead of tilting at voter fraud windmills.

You don’t understand how our Government “works” do you? Congress controls spending.

He did not make it about him. As he said many times, it’s about us. The powers that be, led by the Big Tech overlords and friends, has shown him to be on point.

You can blame him, but why overlook or excuse the fact so many acted to destroy him and those who agree with America First.

At least someone took them on. Hopefully, more people will join the freedom counterculture and take them on again.

Please explain how your plan to forfeit the game because you could lose if you show up would have yielded better results?
And did you come up with it or did you simply copy and paste it from the Bulwark, the David Frenchism-site Dispatch, or the National Review smart crowd?

The game is over, we lost the presidency. This has been clear for about a month. Every court has shut it down. There is no path to reversing the vote count… none, nada, zip.

But there was a second game fairly close in importance to the first… holding the Senate. Now that is gone too and Trump’s actions (and inactions) helped make it so.

Maybe if you peacefully get on the trains, then nothing bad when happen at the end of the trip. Fool.

The fact that “every court has shut it down” IS PART OF THE PROBLEM! The pussy courts have their heads in the sand. Nope … can’t evaluate it on the merits. NO STANDING! NOTHING HAS STANDING!

The courts are now part of the deep state. God help us all.

Nice try, but I’ve tried talking sense to these folks myself and it’s impossible. They will forever believe that the presidential election was stolen, without a shred of factual evidence. Everything and everybody, including judges and justices Trump himself nominated, are all part of The Deep State. They can’t even acknowledge that the Georgia Senate race was lost because President Trump and his crack (1-60) legal team convinced Republicans that the elections were unfair, illegitimate, so there was no reason to vote. No amount of reasoned argument can reach these people, which explains why the U.S. Capitol is currently under attack. This is the end result of a cult built around a defective personality.

There are MOUNTAINS of evidence, troll. Refusing to hear the evidence does NOT mean there is no evidence.

I hope Trump goes after every RINO who sold their voters a bill of goods. I registered today as an Independent. Renounced the GOP. I was once a member of the State Central Committee. I will not be voting for any RINOs again. If given the choice of a Bush/Romney/Ryan type candidate and a Communist Democrat. I’ll just not vote. I don’t care any more.

Trump was the only decent honest politician anymore. I’m tired of the racist RINO/DNC candidates. They are just a waste of time thinking they will not lie and may possibly do the right thing.

Pence today is like the field goal kicker. Less than a minute is left on the clock. Your team’s down by two points. It’s fourth down with long yardage. The ball’s on your own 45 yard line.

Goat’s what I expect as well. Pence’ll live up to my long-held impression of him, a Malcolm Milquetoast.

The wimp I always imagine he would be,

Mike assures himself and Karen that invitations to CFR events and swank cocktail parties in Georgetown will continue. Calls himself a Christian but is fine with lies and deceit in elections.

Constitutional evidence that the VP has the power to do what the POS narcissist wants him to do?

One of the things I admire about Trump: he doesn’t suffer gladly the fate of Gulliver at the hands of lilliputians.

He doesn’t suffer from an inferiority complex, or Law-itis!

Pence, on the other hand, lacks a spine and bends easily to intimidation.

Watching America die at the hands of foreigners has been one of the deepest regrets of my life.

The musslemen, the chinese, the mexicans, the cartels, you name it.

Why isn’t anyone covering the massive Biden rallies? Where is the traditional inauguration parade being held this year?

If a vote cannot be audited, did democracy die in darkness?

The American dream: Pro-Life, Liberty and the pursuit of Happiness. #BabyLivesMatter

I am saying this wherever I go today: It’s time to leave the Republican Party. They are subservient to the Democrat Party. They are corrupt and cowardly and do NOT represent us. Stop pretending that we can vote our way out of this. You all know better. It’s just that many of you don’t want to face it.