Locked out of his account for violating Twitter’s rules regarding “civic integrity” for posting a video President Trump’s D.C. rally speech. 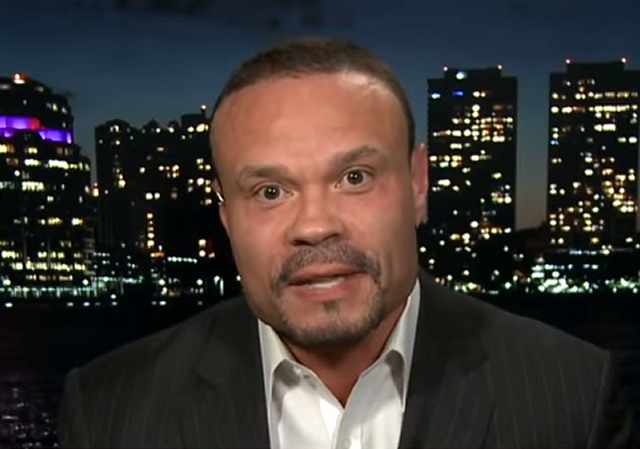 Conservative commentator Dan Bongino has announced that he is leaving Twitter for good after his account was suspended for sharing the video of President Trump telling DC protesters to go home.

Social media censorship and bans have increased in recent days, as even Trump was locked out of multiple accounts.

Bongino is one of the first high-profile conservatives to call it quits with Twitter.

“I’m leaving the platform permanently for Parler. I’ll post my final tweet and message for Twitter tomorrow when the 12-hour lockdown ends,” he told the Washington Examiner. “F— these a–holes.”

Bongino has a massive following on Twitter, reaching nearly 3 million followers. He will jump to Parler, which was founded in 2018 and has been lauded as a platform that protects free speech.

He was blocked from his account for violating Twitter’s rules regarding “civic integrity” for posting a video President Trump released yesterday on his social media accounts asking for protesters to go home after they stormed the Capitol, and it included claims the “election was stolen.”…

You can find Bongino on Parler here.

Other conservatives in media commented.

Byron York of the Washington Examiner:

This is ridiculous. Worse, actually. People are perfectly capable of forming their own opinions on Trump's claim to have won the election. Trying to memory-hole it is not only Big Brother-ish, it deprives public of useful information. 2/2 End.

I'm posting this on behalf of Dan Bongino:
"I got locked out of Twitter for posting the Trump taped speech. As a result, I’m leaving the platform permanently for Parler. I’ll post my final tweet and message for twitter tomorrow when the 12 hour lockdown ends."

This will be my final post on this anti-American platform. The greatest threats to liberty are the destructive tech tyrants who have acted as publishers in their ongoing wars on conservatives & free speech. You can find me on Parler, where we respect free speech. I’m “dbongino.”

While we’re on the subject of Dan Bongino, I want to share a clip from his appearance on the Sean Hannity show on Wednesday night. He made some excellent points about the hypocrisy of Democrats and the media, and the double standard on how behavior is covered depending on politics. Watch:

"We have roundly condemned the violence tonight on this network. Everyone. Period. That's it. Where was the media when my Secret Service friends were calling me with a mob outside of the WH during the summer of protest? … Where were the mass condemnations there?" – @dbongino ? pic.twitter.com/qVjtQR2uOw

The social media purge is going to continue. If you spend any time on Twitter, you have probably seen multiple people claim that they have lost various amounts of followers in the last few days.

That is not happening by accident.

“This is ridiculous. Worse, actually. People are perfectly capable of forming their own opinions on Trump’s claim to have won the election. Trying to memory-hole it is not only Big Brother-ish, it deprives public of useful information.”

Oh, knock it off you sanctimonious drip. This is what you and every other preening NeverTrumper was warned about but flatly ignored. Having successfully stolen an election, did you seriously believe your precious Biden* administration would not immediately begin to crack down on free speech and the Bill of Rights?

The big tech actions have been carried out by big tech. Biden and his incoming administration has nothing to do with it. Well only in the sense that if big tech is seen as enabling a coup they might get regulated. Parler should watch out for that.

Remind me again how the Biden* administration has nothing to do with the growing crackdown on free speech?

BTW: is it official that dissent is no longer the highest firm of patriotism? I thought accusations of insurrection were just a sinister Trumpian plot, but maybe Oceana is now at war with Eurasia again.

Yes, they knew that the Democrats would reward them in many ways for helping with the election. There will be many many paybacks and pay-forwards for that matter for future elections. And if certain Dems don’t help enough, well, there are other candidates who will and the non-supporters will be deplatformed and never hold office again. There is also zero chance with total D control of government to resist their speech lockdowns and deplatforming, in fact it will be encouraged.

Also, the government will help FB and Twitter by working to regulate and crush any alternatives like Parler. Icky conservatives must not find a platform anywhere.

Nothing personal, but if you use FB you empower it.

You have the power if you will use it.

The main difference between Communism and Fascism is that under Communism all the industry is owned by the government, while under Fascism big business is technically private, while taking orders from the government. For all that we call Dems Communists, it’s much more accurate to call them Fascists.

Remember when President Obama fired the CEO of GM? Or when he pressured banks to stop doing business with companies he wanted to shut down?

We’re way down the slope now, and it just gets steeper and slipperier as we go. It’s basically impossible to make money on the internet today without Google’s approval, and the main work-arounds like PayPal and Patreon have joined that effort. Sure, it’s all private industry, but good luck trying to start up a competing business with the disfavor of the regulatory state.

I agree. This is how the Libertarian ideals run aground when they say private businesses are just that and have no obligation to honor free speech. This opened the door for some businesses to become the de facto speech and thought police after they gained monopoly control of information. Some Libertarians say “if you don’t like it, you can start your own platform”. The government would lean on any banks you would want to get a loan from to deny you though, so first you would need to start your own bank, create your own internet, and then maybe you could start a platform, which would then probably be shut down by the FCC or something anyway.

“Let them then own land or factories as much as they please. The decisive factor is that the State, through the party, is supreme over them, regardless whether they are owners or workers. All that, you see, is unessential. Our Socialism goes far deeper… What are ownership and income to that? Why need we trouble to socialize banks and factories? We socialize human beings.

Yeah, but Hitler wasn’t Marx. I realize that the concepts have been distorted by others over the years for their own purposes, but even though Hitler and his minions called themselves “socialists”, they technically weren’t.

And then, of course, there’s the fact that there is no such thing as a “free market”. Every market is, to one degree or another, controlled by the government – especially ours. So effectively you have Socialism, Communism, and Everybodyelseism.

notamemberofanyorganizedpolicital in reply to clintack. | January 8, 2021 at 4:00 pm

Remember when even online businesses would take a written checks through the mail and then not ship goods until the check had cleared the bank?

This fascism by the Stalinist big tech arm of the Democrats will be their undoing.

I appreciate your optimism, but feel it is untempered by realism.

I wish. Totalitarian government is the historical norm. The US was a grand experiment. I use the past tense intentionally.

It will, of course, but the question is when.

Stalin had been dead for thirty year before anyone had heard the names Gorbachev or Yeltsin.

Dear Jack: Why did I write that? No coffee!

Agree; big tech is making small tech more attractive! Get off FB and get on http://www.Gab.com and http://www.TV.Gab.com!

Quit using the bigs and like Fox, they’ll get small!

notamemberofanyorganizedpolicital in reply to MAJack. | January 8, 2021 at 3:46 pm

This is not Fascist Italy.

This is not Fascist Spain.

This is The United States of America of We the People

The Uni-Party Globalists have AWAKENED A SLEEPING GIANT.

As some wag on Twitter has pointed out… I guess the idea of the population armed with AR15s successfully going up against the federal police force isn’t so far-fetched after all.

It is going to get worse, folks. A lot worse.

First Amendment? Enjoy whatever is left of it while you can.

I am on Gab, Parler works as well as an unfolding lawn chair.

It will be interesting to watch the effects of two different IM injected vaccines, one a genetically engineered antiviral, and the other a metallic pellet targeting tyrannical mental predispositions.

I realize the difficulty of switching platforms and maintaining contact with your fans, but I’m not terribly impressed with any of these personalities who wait until they’re the ones being targeted to switch to a more fair and stable platform, in the meantime continuing to put revenue into the pockets of our enemies. That isn’t principled action, it’s just a forced reaction.

And yet the left calls us “fascists”

The Neo-Marxist/Big Tech cabal is already trying to marginalize and ultimately shut down Parler.

Remember all the efforts attempting to shut down conservative talk radio? They failed because the airwaves are still free. Internet platforming is not so free when a corporation run by Lefties is providing the platform infrastructure.

The Movement must create and develop its own internet platform infrastructure ASAP.

There are 80 million Trump supporters out here, If we started a third party { Freedom Party } Rather than send money to 2 faced Republicans We fund our own party. 80 million strong voters scares even the democrats, An would put the republicans out for good. they would have no power. then we could run our on candidates in all 50 states,Even the Democrates Can not rig an steal that many elections. What do you people think. It ay be our only way to get or country back

With election rules as they are in most states a third party is impossible. You have to petition to get on the ballot, every year, and in most (all?) states there is no way to get permanent status. The Republicans and Democrats have permanent status by law, so they don’t need petitions. It’s a huge advantage.

People Talking about this problem is fine an dandy, But instead of talking we need to start organizing A single movement is the only way you are going to get our country back. talking about guns is not the way to get things done. just remember once a bullet is sent out you can not call it back, once you draw blood there is no turning back. we need leaders organize, donate money only to our cause, The democrates can not take down if we are united. if we stand as one we can beat them at the ballot box. Do not count on Republicans to help us, they will not we have already seen that.