“The truth is if you wanted to be inclusive what you would, of course, make sure that transgender athletes, who have male bodies feel welcome and comfortable on the male teams…” 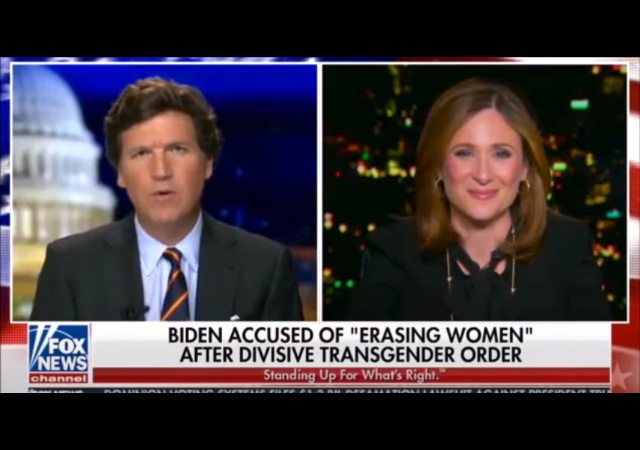 Author Abigail Shrier, who made waves with her book on the transgender effects on girls across the country, told Tucker Carlson that President Joe Biden’s trans executive order “spells the destruction of women’s sports.”

The whole conversation centered around Shrier’s recent op-ed in The Wall Street Journal:

“Finished. Done,” Olympic track-and-field coach Linda Blade told me. “The leadership skills, all the benefits society gets from letting girls have their protected category so that competition can be fair, all the advances of women’s rights—that’s going to be diminished.” Ms. Blade noted that parents of teen girls are generally uninterested in watching their daughters demoralized by the blatant unfairness of a rigged competition.

I say rigged because in contests of strength and speed, the athletic chasm between the sexes, which opens at puberty, is both permanent and unbridgeable. Once male puberty is complete, testosterone suppression doesn’t undo the biological advantages men possess: larger hearts, lungs and bones, greater bone density, more-oxygenated blood, more fast-twitch muscle fiber and vastly greater muscle mass.

Carlson and Shrier brought up Allyson Felix, who is the best female sprinter of all time. Her 400 meter is 49.2 seconds.

Shrier pointed out that 300 high school boys in 2018 could beat that time. I could not find where Shrier found that information. but I found the 2017 NCAA Division I Championships in the 400m had 24 males with times from 44.57 seconds to 47.36 seconds.

“The truth is if you wanted to be inclusive what you would, of course, make sure that transgender athletes, who have male bodies feel welcome and comfortable on the male teams because putting male bodies against male bodies, that’s what sports is about. It’s about bodies. It’s not about identification,” Shrier explained.

Girls are not the voting block being cared for, it’s the trans genders that are the ones this is for. Every special interest gets a big apple to bite on.

You’re sure right on that! Look at all he’s doing for the folks at the construction unions. Oh, wait…!

I really think this is for people like you and me. It serves as a way to identify people who won’t just toe the line when insanity is foisted onto us.

I think the point of the lie is to make us feel powerless to combat obvious falsehood as a way to tear us down.

If this Trans garbage is such a big deal why not have a trans league.

Because that’s not what it’s about; it’s about forcing everyone to be complicit, even enthusiastic, about the lie.

Because, like other pushy belligerent people, they want to insinuate themselves into places and organizations were they aren’t wanted.

Agree, and to add to what others said, look what the left is doing with bathrooms. It’s absolutely idiotic.

She is right. It is mysogyny, plain and simple.

Women’s teams should recruit a large number of real men to join their team when their forced to allow trans people to join. The real men can claim to feel like a women and serve to ensure that the trans will lose every race their in.

So what happens when we all identify as “female”?

“…make sure that transgender athletes, who have male bodies feel welcome and comfortable on the male teams…”

I had a family law professor explain it like this: ask them what remedy they seek. Once you know that, the picture is often greatly clarified.”

So many remedies pushed by the left have foreseeable, perverse, unhappy results. It’s almost like they really mean to make as many people as possible miserable, to overwhelm our systems, and bring about destruction….

As I have been saying for some time now, misery loves company.

Just tell a masochist of the left you don’t want to be part of their insanity, and you’ll unleash their sadism.

How anyone finds ‘gratification’ in being beaten is just something people of sound minds cannot easily relate to. Nor someone’s sadism.

But when you watch Gretchen Whitmer, Debra Messing, Cuomo and the like, you really get the filthy picture.

Maybe they figure by throwing 20 leftist cultural revolutions against the wall every day, something will stick. We used to do that with globs of wet toilet paper in public school bathrooms, points for hitting the ceiling.

The real question is: why?

Well, I can only offer that we hurled globs of wet toilet paper on the bathroom ceiling because we were 12, stupid, it was fun and we hated school. However, the toilet paper globs did not represent an existential threat to meaning or the bathroom.

Because this is what Michael Robinson Obama ordered Pres. Joey to do so.

The problem Saint Thomas Moore had with King Henry VIII isn’t that Moore publicly condemned the King’s behavior in public. What Moore refused to do was endorse the King’s miscreant behavior.

That is how the wicked roll–allowing their behavior only works until they can demand approval.

Notice how quickly we went from same-sex attraction people coming out, to their demanding the right to lease apartments and houses together, to demanding civil unions to getting marriage privileges.

Moore lost his head. Actually, he kept his cool, the King had Henry’s head separated from his shoulders. The Church celebrates his death about the same time has John Fisher, the only Bishop to object to becoming part of the Church of England. The rest of the Bishops were willing to go along with Henry and the new church.

P.S. This plan has been in the works for a while. No one who has been paying attention is the least bit surprised.

I ran the 880 yards in High School (just about = to 800 meters), best time then was about the same as the women’s world record for it, but my time was not good enough to get on a college team.

It’s been so refreshing for our country to go back to “leading from behind”. I bet slow joe/#not my president will probably have a Constanta combo (Chicken salad, on rye, untoasted… and a cup of tea) for lunch tomorrow.

His nurse, Dr. Pepper Jill, will be feeding Joey Gerber’s puree turkey and gravy and for dessert some banana/apple/pear.

…which would be what, exactly?

Waaaaaaaaalllllll, aren’t women suposed to be part of the grand coalition against white, heterosexual Christian males (regardless of their skin color now, I understand).

This is deliberate communist propaganda. The intent is to make people lie, tell lies they know are untrue, to humiliate themselves, in surrender to the communists’ power. This is demonic, satanic. We must destroy them.

The ultimate war on women.

To the idiots who really think the left has your best interests at heart: hold onto your feminine hygiene products! When are people going to learn that today’s victim du jour is tomorrow’s cast away? These lying bastards use you to get your vote, then once elected, thumb their noses at you when it’s too late to do anything about it. Just look at what they’re about to do to our country, especially minority communities, with the flooding of ILLEGAL ALIENS. If you can’t be used to keep these whores in power, you can go to hell. Sadly, too many will never learn. At this point it may be too late anyway.

I will always refuse to believe that Richard/Rachel Levine is as much a woman as the mother who bore me or the wife who bore my sons. He is a eunuch in drag, only with slightly more fancy and expensive cutting. As for those who encourage minors to “transition”, they should be arrested and prosecuted to the full extent of the law for abuse of the worst kind. Transsexulaism needs to be pushed back into the realm of bad adult entertainment (on which I would not waste a good wooden nickel).

The interesting thing about this is that at the top levels of women’s sports, a highly disproportionate portion of the competitors are lesbian. And lesbian athletes are overwhelmingly leftist (my guess is that a majority of the straight ones are as well).

So the “L”s are going to be crushed by the “T”s with the very LGBT movement that they have long supported.