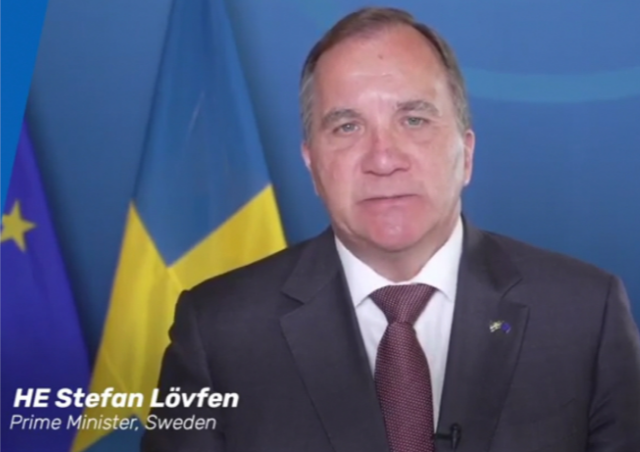 “Do as I say, not as I do” appears to be the unofficial motto of the leftist politicians across the globe as they flaunt the very coronavirus restrictions they impose on ordinary citizens.

The latest example of this hypocrisy happened in Sweden after the country’s left-wing Prime Minister Stefan Löfven was caught visiting a crowded shopping mall without a mask shortly after instructing people to avoid such places, the Swedish media reported Tuesday.

The prime minister’s visit to the mall, which reportedly took place a few days ahead of Christmas, appears to have violated Löfven’s own diktats telling Swedes to avoid crowded places and “refrain from spending time in indoor environments such as shops, shopping centers.”

The German broadcaster N-TV reported the incident citing the coverage of the Swedish daily Expressen:

Sweden’s Prime Minister Stefan Löfven has triggered a wave of negative media coverage over a visit to a shopping center. Despite an appeal by his government to refrain from visiting such places in the wake of the coronavirus pandemic, the prime minister was himself in a shopping mall, as it is now being reported.

The newspaper Expressen has published photos that show Löfven in Stockholm’s Gallerian mall on December 20. Two day prior to the visit he had urged the citizens to avoid crowded shopping centers before and after the Christmas season. “I hope and believe that everyone in Sweden understands how serious it is,” Löfven said in a press conference.

A spokesman speaking on behalf of Löfven explained that the prime minister was in the shopping center to “collect an item that he had previously deposited.” The visit was carefully planned and Löfven followed his and health authority’s recommendations to avoid crowds [, the spokesman added]. “I can’t go into further details,” the press spokesman Mikael Lindstrom told the German press agency dpa. [Translated by the author]

The gap between public signaling and personal behavior is not limited to Sweden’s prime minister. The country’s Justice Minister Morgan Johansson was also seen inside a shopping mall in Lund over the Christmas weekend, local media reports confirm. The minister later described his shopping spree as “careless.”

The revelations come as Europe, including Scandinavian countries, is in the grip of the second wave of the Wuhan coronavirus pandemic. Most European countries, including Germany, France, and Britain, placed strict lockdown restrictions on businesses and private individuals during the Christmas and the New Year celebrations.

On the other side of the Atlantic, U.S. Democrats have indulged in similar behavior while pushing for lockdown measures that have devastated businesses and livelihoods across the country.

According to the Business Insider website, at least thirteen prominent Democrats have so far been caught defying coronavirus restrictions.

In September, Democratic House Leader, Nancy Pelosi, was caught without a mask on a security camera while visiting a San Francisco hair salon during the lockdown. The local regulations did not allow salons to operate at that time.

Instead of regretting her behavior, Pelosi accused the salon of framing her.

“It was a setup, and I take responsibility for falling for a setup,” she claimed. “I think that this salon owes me an apology for setting me up.”

‘Nancy Pelosi without mask in a San Francisco hair salon’

Off with them all.

Remember Sweden collaborated with Nazi Germany – providing all kinds of natural resources to them.

Sweden us NOT special.

Georgia Ballots Were Printed DIFFERENTLY for GOP Counties vs. DEM Counties — He Rigged the Election!!!!!!

dmacleo in reply to notamemberofanyorganizedpolicital. | December 30, 2020 at 3:15 pm

well except for that whole heart attack thing from a procedure related to covid. but yeah murdered.

The Friendly Grizzly in reply to notamemberofanyorganizedpolicital. | December 30, 2020 at 3:21 pm

Do you work for Gateway Lyndit?

Social distancing serves, among other purposes, to enable the forward-looking, sincerely held belief that you can abort your baby and have her, too. A double-edged scalpel, certainly, but how many have suffered the repercussions of their faith, religion (e.g. “ethics”), and ideological bent?

Think he is pushing for a spot on the Democrat’s party?
Leftism is always about those who are the rulers and who are the minions who follow the rules.

nice of people to post on one site and try to drive traffic to another.

These politician rulebreakers must be doing it on purpose. Their social set or their masters must be telling them to get caught breaking the rules, so the rest of us learn our place. It must be a worldwide operation to break our morale.