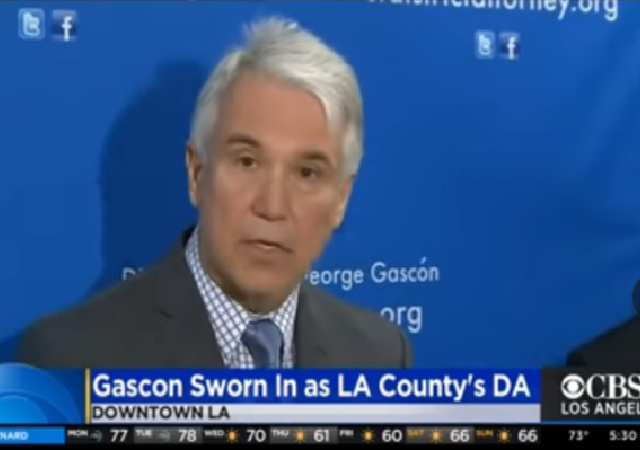 As he assumed the head of the largest prosecutor’s office in the nation Monday, he said his new agenda for Los Angeles — which includes ending cash bail for certain minor offenses, the death penalty and the practice of charging juveniles as adults — will differ from his predecessor’s in order to better prevent crime, reduce recidivism, and restore victims.

“I recognize that these are big changes, but they are changes that will enable us to actually affect the truly vulnerable,” Gascón said.

Gascón announced he is immediately ending the cash bail system, adding that experts believe hundreds of incarcerated individuals would be eligible for released tomorrow under a new pretrial release policy. He said his office will also roll out a plan to eliminate all bail in the nation’s most populous county beginning January 1, 2021.

How popular is ending cash bail with most citizens? Not very.

To begin with, this November, California voters rejected the proposition that would have ended cash bail, replacing it with risk assessments.

On the other coast, New York was forced to retreat on its grandiose bail reform schemes. The rollback occurred after a serial robber proclaimed the bail-free system “a beautiful thing,” and anti-Semitic attackers left jail only to target new victims.

On top of ending cash bail for “minor offenses,” Gascón will decline to prosecute an extensive number of misdemeanors.

As of Tuesday, many misdemeanor cases will be declined or dismissed prior to arraignment unless “factors for considerations” exist. The list of offenses includes trespassing, disturbing the peace, a minor in possession of alcohol, driving without a license, driving with a suspended license, making criminal threats, drug and paraphernalia possession, being under the influence of a controlled substance, public intoxication, loitering to commit prostitution and resisting arrest.

In addition, prosecutors will not seek the death penalty and those accused of misdemeanors and low-level felonies will be referred to community-based programs.

For juveniles, those accused of misdemeanors will no longer be prosecuted.

“Our prosecutorial approach should be biased towards keeping youth out of the juvenile justice system and when they must become involved, our system must employ the “lightest touch” necessary in order to provide public safety,” Gascon said in another order.

Finally, it appears that the new LA County DA is skeptical that voter fraud in California is significant. Legal Insurrection readers may recall a 2016 case in which 80 different ballots went to a single address. At the time, Gascón offered this analysis:

“There’s nothing rigged about our elections, and even when there are some minor irregularities, the reality is that they will be statistically insignificant,” San Francisco District Attorney George Gascon said Tuesday at a news conference meant to reassure voters.

As 2020 seems to be the year when 1980’s movies become a reality, I would like to be the first to welcome any who come to the Los Angeles area to Thunderdome.

Welcome to “A Clockwork Orange.”

I have been involved in the criminal justice system in Los Angeles County for 40 + years.
These new policies by the elected District Attorney will be catastrophic for the citizens of Los Angeles County. They will soon realize how foolish they were to vote for this fool, when crime seeps into their previously crime-free suburbs, and the homeless start camping out in residential areas.
Downtown LA has always had this issue: Now, it’s coming to the suburbs.
The violent crimes typically occur in the poor areas of Los Angeles County, and other poor people are inevitably their primary victims. Under the guise of “compassion”, Gascon has ensured that the already difficult struggle for existence in those parts of the County will become just that much more difficult for the majority of law abiding people who live there.

Like di blasio, like lightfoot, like garcetti etc, this guy has been put in place to destroy a major city, to create movement by the more functioning people in it to leave for conservative states, where they will destroy them in turn by their suicidal liberal voting habits.

LA, NY, Chicago and the like will be left to the ruling class and the hopeless lower class they lord over and steal from.

the practice of charging juveniles as adults
If I recall correctly, this became a thing in CA in large part because the Hispanic gangs were regularly using juveniles to carry out robberies and executions.

The Gascon Theory was already employed in NYC during the Koch and Dunkins years with disastrous results. It took Mayor Rudy Guiliani’s Broken Windows policies to repair the breach.

Kids who jump turnstiles and steal cigars at convenience stores become the guys who later mug, rape and murder.

I don’t care. As in Portland, Seattle, and NYC: This is what people voted for. Let them have it.

So, this fool helped to destroy San Francisco and now he’s moving down the coast to speed up the destruction of Los Angeles, right? I’m not a lawyer, but does he actually have the authority to just do away with the bail system? Also, has the recall effort started yet?