Twitter user: “Looks as though, regardless of political affiliation, people think Tom is the lowest form of life. Finally something we can all agree on.” 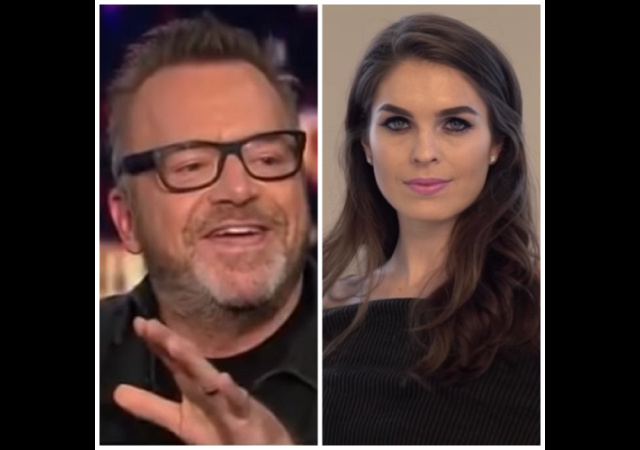 Actor Tom Arnold thought it’d be cool to tweet out Hope Hicks’ number after she tested positive for COVID-19.

In a since-deleted tweet, Arnold offered fans an opportunity to speak with Hicks directly.

The star has been very outspoken in his disdain for Trump and the current administration.

Did he apologize? No.

I was being nice!! Tom Arnold shares Hope Hicks' cell phone number after she tests positive for coronavirus https://t.co/iQggZ1wItb #FoxNews

Of course not even though he revealed her personal information.

I can't stand any of them, but doxxing is not okay not even to people as loathsome as the Trump entourage

Hey @jack you suspended me for making a suicide joke but not @TomArnold? Wtf

#TomArnold putting out #HopeHicks phone number should get him banned from twitter.

Looks as though, regardless of political affiliation, people think Tom is the lowest form of life. Finally something we can all agree on.

I’m a Biden voter and I’m reporting you for harrassment. Reprehensible.

Dude.
I don't agree w/this admin, but you crossed the line. Not cool.

I hate this administration but this is SO NOT OKAY.

Some borrowed-fame guy (used to be married to Roseanne Barr) who makes it his life’s work to make Charlie Sheen look mentally stable.

notamemberofanyorganizedpolicital in reply to McGehee. | October 2, 2020 at 9:26 pm

I think he’s battling to be the very bottom with The Rock, who after endorsing Kamala, flexible Kamala, is dropping Like a Rock himself.

the_red_tie_republican
@TieRepublican
The Rock has lost 48 million followers in the last few days.

Tim Arnold is a royal A-H***. I wish I still had the piss and vinegar to be nice to him.

An old has-been who has the hots for Hope.

Some dude looking for 15 minutes of fame.

Considering the chance that she is the one who infected Trump, I’d think the progs would be hailing her as some sort of hero.

Did they take Hope Hicks to Walter Reed as well?

notamemberofanyorganizedpolicital in reply to Paul. | October 2, 2020 at 9:27 pm

Think it was Chris Wallace and Biden.

Honestly don’t you know scads of top Democrat politicians have the virus and they will never admit that they have had it or still have it!?

Come on man! Dims lie about everything! Why should having the virus be any different! ….. About things they would lie about?

Tom Arnold is what a late friend of mine from Africa would call, “a garbage person!”.

So TDS suffering Arnold can’t restrain himself from going too far over the top on Twitter.

After a bit of self reflection they decide they don’t want to be on the same team as Arnold and don’t vote or better yet vote Trump?

Unlikely sure. Will it happen, not many times but yes. If a few thousand do that in PA or MI or another battleground state ruled by a blue meanie governor that shutdown their neighbors or cousin’s job that would have an impact.

Yes I have been saving the blue meanie reference for an appropriate moment.

Smegma encrusted chlamydia like life-form. Kind of reminds me of Cher, with glasses.

It is not the lying by someone like Tom Arnold that bothers me. Remember this is the guy who claimed – still claims – to have double-secret tapes that supposedly catch Trump doing … something. He has never produced the tapes, but the Joseph Goebbels media accepts that they exist and to this day speculates wildly about what they contain.

Rather, it is the fact that Arnold’s lies are clumsy, stupid, and easy to debunk that bothers me. This latest whopper is on par with saying the sun rises in the west and sets in the east, or that Russia stole the 2016 election. Does he really believe we are dumber that he is (that is saying a LOT!)?

Where’s the tape you said you hard Arnold?

Wasn’t he on tv 50 some years ago? Too bad he hasn’t done anything since. Maybe because he’s a asshole?

Ick. Arnold is a skeevy guy. Leave Hicks alone. Anyway, did anyone tell this rube that Hope can simply change her number!? LOL! Derp!

Simple to change the number? Yeah. Simple to let her contacts know the new number? Doubt it.

When you are a grade Z talent, and got where you are by marrying a fat, homely woman who is successful, you act like a moron in the hopes the powers that be see your moron dance and pay attention to you.

Hope Hicks may have the COVID virus, but she will recover and the virus will go away. Tom Arnold’s got the A$$#@+% virus – and that one never goes away.

So Tom Arnold was banned from Twitter for violating the TOS against doxing the personal information of other users on his Twitter account. Right? Right? RIGHT!?!?

Oh that’s right, only Conservatives are held accountable to the Twitter rules. As long as liberals are “just being nice” they get a pass.

Tom Arnold – the only person alive who can stand alongside and make Roseanne appear to be a nice person.