Fairfax faced rape and sexual assault allegations a year ago. 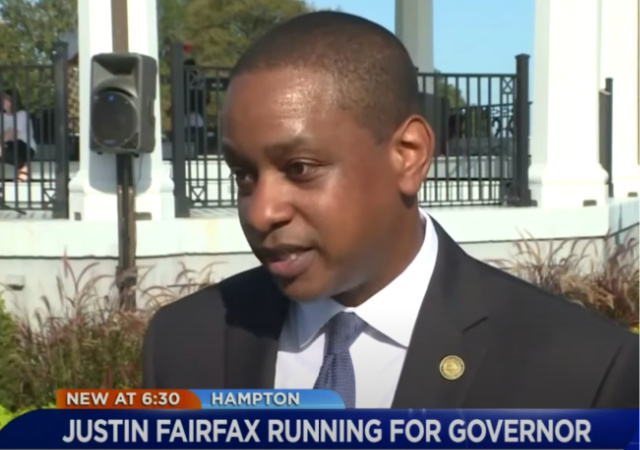 Virginia Lt. Gov. Justin Fairfax announced his gubernatorial candidacy a few months after he let people know he was thinking about it.

The announcement also comes a year after he faced two sexual assault allegations.

Fairfax made his speech on Sunday in Fairfax, VA. He faces at least two other Democrats in the race: Del. Jennifer Carroll Foy of Prince William County and Sen. Jennifer McClellan of Richmond.

Fairfax once again denied the allegations:

Fairfax has denied the allegations and accused the women of being part of a “smear campaign” to end his political career.

“The voters are incredibly smart. They see through this kind of destructive, politically motivated kind of politics. And they are ready to move to higher ground,” he told The Associated Press this week.

Vanessa Tyson, a professor in California, claimed Fairfax forced her to perform oral sex on him in 2004 at the Democratic National Convention:

As I cried and gagged, Mr. Fairfax forced me to perform oral sex on him. I cannot believe, given my obvious distress, that Mr. Fairfax thought this forced sexual act was consensual. To be very clear, I did not want to engage in oral sex with Mr. Fairfax and I never gave any form of consent. Quite the opposite. I consciously avoided Mr. Fairfax for the remainder of the Convention and I never spoke to him again.

Then Meredith Watson came forward. She alleges that Fairfax raped her in 2000 when they attended Duke University:

Kaneedreck Adams, 40, who attended Duke with Watson, said that in the spring of 2000, when they lived across from each other in on-campus apartments, Watson came to her crying.

“She was upset,” Adams, an attorney, said. “She told me she had been raped and she named Justin.”

“Did you ever talk to him [Fairfax] after he allegedly assaulted you, did you ever say, ‘How could you do that to me, you were my friend?'” King asked.

“I did. One night after it happened … I was at a party on campus and he came and so I went to leave, like, I left. And he followed me out and was sort of following after me, calling after me,” Watson said. “And I was just running trying to get away and then I finally stopped and I turned around. And all I said to him was, ‘Why? Why would you do that to me.’ And he said, ‘I knew because of what happened to you last year that if I got you in the right situation, you would be too afraid to say or do anything about it.'”

“Meredith, you hear that and you think what?” King asked.

“He knew what he was gonna do that night when he asked me to come over,” Watson said.

Tyson, through her lawyer, once again demanded the General Assembly hold public hearings. The Democrats have refused to do anything about the allegations:

An attorney for Tyson, Debra Katz, wrote in a statement: “Apparently Lt. Governor Fairfax believes that the citizens of the Commonwealth have forgotten about the serious and credible allegations of sexual assault made against him by Dr. Vanessa Tyson and Meredith Watson and about his deplorable treatment of them after they came forward.”

He black and he’s a liberal. that 2 rungs on the intersectionality ladder. Sexual charges to a liberal have ben a resume enhancement since just after Gary Hot pants in the 80s

Hold them to their standards – even wild, unproven allegations of sexual predation cancels you. So, by their own standards, do not let this horrendous predator take office.

Hold your people to your standards – innocence until proven guilty, based on strong evidence beyond a reasonable doubt, remembering that justice belongs to both the accuser and the accused.

notamemberofanyorganizedpolicital in reply to Brave Sir Robbin. | September 14, 2020 at 1:55 pm

Communist privilege. Some will always be more equal than others.

Lol I was just thinking Gary Hart must be furious

Those on the left are just fine with rape, pedophilia, corruption, racism, bigotry, lying, looting, theft, hypocrisy and of course murder. Any pretense that they don’t has long since gone up in smoke.

You’re on to something there. Leftists don’t care about those things, but they know that WE DO. So they weaponize conscience against those of us foolish enough to have it.

The main question: would he be an improvement over the present Goobernator?

That depends, if he is willing to murder a viable infant after birth, you know, if the mother so deems it, kind of what farmers use to do to kittens back in the day…

Love is Love and Gillium is on the way back!

I think he’s telling half the truth.

Hey Barack — when are you going to show some courage?

Andrew Gillum, the former mayor of Tallahassee, Fla., came out as bisexual in an interview with Tamron Hall on Monday.
Driving the news: “I don�t identify as gay. I identify as bisexual. I�ve never shared that publicly before,” Gillum, who was once considered a rising star in the Democratic party after his Florida gubernatorial run in 2018, told Hall.

Background: In March, Gillum was found deeply inebriated in a Florida motel room with two men, one of whom was identified as a male escort suffering a drug overdose. Gillum later issued a statement saying he planned to withdraw from public life and deal with alcoholism.

Is everyone ready for the Andrew Gillum Gay Hero World Media Tour?

The guy will be feted for having done drugs with a gay hustler. How stunning and brave!

@Phil_Lewis_
1h
Andrew Gillum on @TamronHallShow, just now: “You didn’t ask the question but I don’t identify as gay. I identify as bisexual. I’ve never shared that publicly before.”

“I just believe that love and sexuality exists on a spectrum. All I care about is what’s between us and what agreement we make.”

53m
R.Jai Gillum said she never wanted to “defend” Andrew’s sexuality or her decision to marry him, with the full knowledge that he was bisexual.

@Phil_Lewis_
�
49m
Andrew Gillum was also asked if he could make a return to politics one day: “Donald Trump is president.”

“The guy will be feted for having done drugs with a gay hustler. How stunning and brave!”

What does Alyssa Milano think about this?

I’m wondering why this is getting press right now. The elections for governor in Virginia aren’t until NEXT November. Is there something else to distract from? Is this an attempt to bury the accusations amidst this year’s hullabaloo, and next year claim “Old news”?

Alyssa Milano doesn’t think – about anything!

Dems sure do love themselves their racist rapists, don’t they?

If it’s not reported to police at the time it didn’t happen.

Call it a media due process rule.

In fairness, the internal vetting in 2017 did not disclose these allegations. I would be very surprised if he gets the nomination. Another factors, which was not covered in the above story, was that party elders viewed Justin Fairfax as “too eager” to have Gov. Ralph Northam resign over his yearbook black-face crisis. Imagine how the Republican establishment would feel if Mike Pence called for Trump’s resignation every time a negative story appeared in the press. So, the smart money is not betting on Fairfax being the next Governor of Virginia.

Two sexual assault allegations? That’s on the low side. The average is 10-15 for the Affirmative Action category.

Another interesting aspect of this situation is one of 2 women who Lord Fairfax supposedly assaulted also claims that former Dookie and NBA star b-baller Cory Maggette also assaulted her. Maggette also left Dook under unusual circumstances back then.

Saint Coach K was asked by msm about this when the gov coonman lord Fairfax stuff first hit the fan but Played sgt Shultz and and directed all questions to Dook sports info director. And predictably msm did not not follow up with saint coach k or lord Fairfax.

But It still seems like if Fairfax gets nomination enterprising reporter could break 2 big stories and repubs would have some ammo to get at least 1 or 2 reporters moving. Or maybe not.

This IS an opportunity for the Pubs in Virginia to put their last fiasco behind them and unite around a mainstream, common-sense governor candidate. Someone who has no skeletons in her/his closet, someone who learn from Trump and not take any guff from the media.

Alas, I suspect the Pubs will demonstrate again why they’re nicknamed the “Stupid Party”…

Too bad the VA GOP is so dysfunctional that they’ll probably lose to this guy.

The VA GOP is way too busy bashing conservatives to put up much of a fight against him.