Will Democrats try to ‘Kavanaugh’ her? 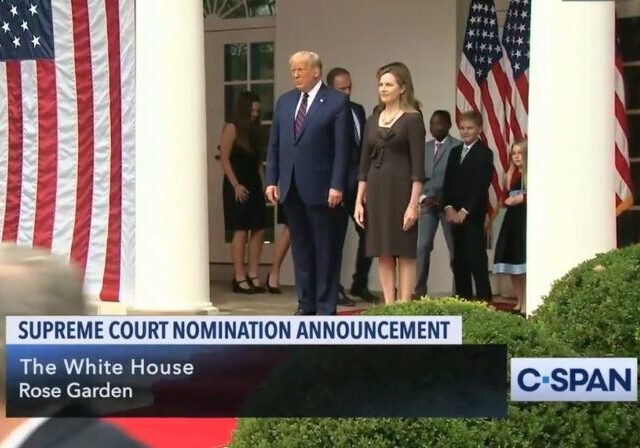 We’re off the the races. 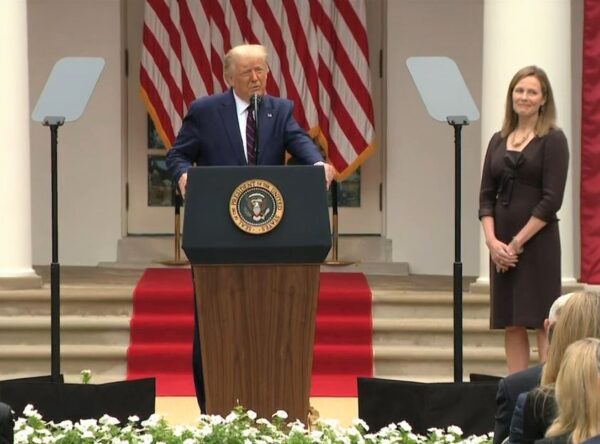 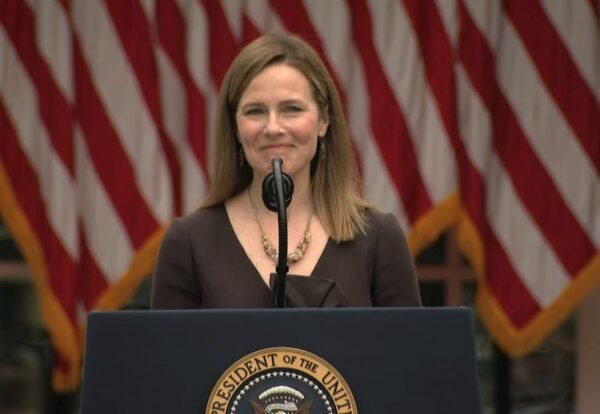 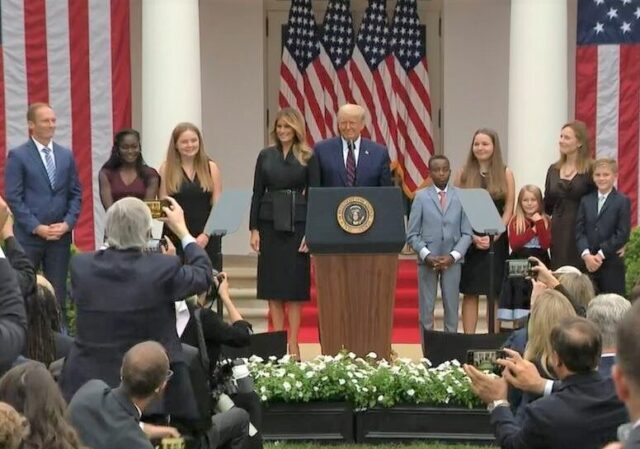 Yup, the vicious attacks the malicious left is about to launch against her are going to go over with the American public *just fine* https://t.co/vQfwiZW60n

If they try to 'Kavanaugh' her, I may lose it. https://t.co/50sTOAXgIJ

Dems are gonna lose many more “Hispanic” and other voters over this!

Wow, so the leak was true.

Go for it. I don’t care if the Democrats get a hearing or not. I have had enough of their nonsense.

notamemberofanyorganizedpolicital in reply to Valerie. | September 26, 2020 at 5:11 pm

Did you the news that DEMS are threatening to stay away from any hearings in a “boycott?”

Pasadena Phil in reply to notamemberofanyorganizedpolicital. | September 26, 2020 at 6:22 pm

I hope they do. Without the tantrums and childish antics, the adults could then give us a new judge in a matter of days

Pasadena Phil in reply to notamemberofanyorganizedpolicital. | September 27, 2020 at 8:35 pm

How this is playing Down Under.

This is Sky News. The Kiwis get better news reporting and analysis than we do. The free world is laughing at the Democrats and is expecting a massive landslide for Trump.

Larry Charles in reply to notamemberofanyorganizedpolicital. | October 1, 2020 at 6:38 pm

Good, it will be be much better without them.

Hope and pray for her, after the Dems get through she will need it.

All American: Pro-Life, Liberty, and the pursuit of Happiness under the structure of our Constitution, less the Twilight Amendment, without diversity (i.e. color judgments, class-based discrimination) and exclusion, for the People and our Posterity.

So it’s Amy “Lockdown” Barrett, big government authority cheers, the constitution, not so much.

Svengali, the LI readership and professoriate have no interest in such issues.

That decision correctly says the Free Exercise clause means religious practice is entitled to greater deference than ordinary speech. This is well-established constitutional law. Governments are not required to grant exemptions from generally applicable laws for religious exercise, but they are allowed to do so, and there is a long history of such exemptions (including the religious exemptions from Prohibition).

Thanks, Fuzzy. I read the first half (I’m on vacation!), and it is as awful an argument as I was told. Coney and the majority take Jacobson from 1905 (if I remember the year correctly, just as the lower court did. This case antedates the jurisprudence limiting government action that has been developed for about 100 years. Given that, how can Jacobson even be applicable?

There are specific tests for the extent to which government can control and its burden of proof. It is hard to understand how Pritzker could avoid narrowly tailoring his orders and how there should not be strict scrutiny. Executive Orders are particularly concerning because they circumvent checks and balances. Of course, his orders are not narrowly tailored and his “evidence” supporting the specifics is laughable. That’s why Stickman of Pennsylvania tossed out key parts of that governor’s order.

I’m happy to hear a criticism of my take. I am an amateur.

Jacobson is binding law unless and until the Supreme Court reverses it. All courts are required to follow it.

Milhouse, Jacobson has been quietly ignored and then replaced with modern jurisprudence involving rules for the government exercise of power (e.g. “compelling state interest” that is “narrowly tailored” to advance that interest).

Jacobson was used to allow the sterilization of dumb people, among other things. Hence the “quietly.”

That’s a simplistic, uninformed and incorrect assertion. Read the opinion in the link.

My prediction is that she’s a snake in the grass and that Trump will live to rue this day!

1) what is your prediction based on?
2) Are you saying the Dems actually want her on the SC?

How about … Republican Party of Illinois v. Pritzker?

If it were taken seriously, government could shut down the First Amendment as much as it does the Second. There would only need to be an “emergency.”

What’s your problem with it? Do you deny that governments are entitled to give religious exercise greater deference than other activities? If not, what exactly does the free exercise clause achieve?

Milhouse, you don’t aim high enough. There is a reason why we have never had shelter in place executive orders unlimited as to time or location. They’re unconstitutional.

1) what is your prediction based on?

I have the same reservation. For me, it’s based on the same spidey-sense that told me DJT was going to win in 2016.

A proven spidey-sense may not be easily articulated but is still nothing to be dismissed casually.

2) Are you saying the Dems actually want her on the SC?

A judge can be both a conservative and a liberal disaster. An experienced pro can manage to disappoint everybody.

I’m anticipating the possibility of the Liberals being killed on abortion and the Conservatives being killed on everything else. As I personally don’t obsess over national abortion policy, I wouldn’t consider such a final tally a net win.

Take a look at Gorsuch expanding Title VII to homosexuals and “transgenders,” despite these groups never being mentioned in the statute, and, never having been discussed or contemplated, by the statute’s drafters. You should be worrying about the Justice who’s already seated on the Court, and, who, in a single farcical case, displays total contempt for textualism, and, who evinces the breathtaking arrogance and narcissism of his Leftist peers on the bench, in re-writing a crystal-clear and unambiguous statute, to suit his preferences and his illogical jurisprudence.

I hope they proceed directly to a confirmation vote.
I have no interest in seeing more screeching Democrat theatre.
It serves little purpose.
Everyone can meet elsewhere to make their decisions if they need to.

Plus the same idiot groups who disrupted the Kavanaugh hearings with their obnoxious antics have promised to do the same this time. I just hope Graham has the gonads to control the committee and to quickly eject, arrest and ban the disrupters from re-entry. Let’s get this over with.

That’s provided they allow spectators into the hearings beyond designated staff, media, and those accompanying the people testifying. The public hasn’t been allowed into congressional hearings since the end of March. If they are allowed, there will be much fewer of them in the room at any given time because of social distancing.

Good to hear. I didn’t now that.

I heard due to the Chinese virus that spectators will not be allowed in the hearing room. In addition, they will not be permitted to roam the halls and elevators (i.e. Flake)…yipppeee.

As long as Alyssa Milano is on the “do not admit list,” I’m good!

I’m hnoping that Kamala Harris will “go for it” with ACB in the committee hearings. Harris was a vicious (name omitted) in the Kvanaugh hearings. She pulls that stuff with ACB, it’s going to bit Harris in the backside so hard that it will look like a Rottweiler was chowing down on Harris’s glutes.

I don’t know if the Communists in the Senate will adopt this as their official attack strategy. But there is no doubt that they really, really, REALLY want to go there.

Thank you President Trump for remaining true to your word!

Is it possible that Amy will be confirmed and then everything will just continue as it was with little change?

This afternoon as I walked past Prospect Park in Brooklyn, NY there was a small group gathered around a memorial to RBG, and one person was wearing a “handmaid” costume. I didn’t stop to exchange pleasantries, I just walked quickly past while muttering under my breath.

If they only made Haldol in an aerosol spray…

At the last minute, the Dems will haul out a frantically scrawled letter from a delusional nutjob who never actually met Barrett, but swears that he (or she) had some kind of scandalous encounter with Amy when she was in elementary school. We’ll be reminded that “accusers don’t lie.”

Gorsuch is the Justice to worry about, now, with his indefensible joining of the opinion expanding Title VII’s scope to homosexuals and “transgenders.” This was an open-and-shut case, a soft pitch to an alleged “textualist,” and Gorsuch whiffed, completely, proffering a ridiculous and atrocious opinion to rationalize why a statute whose explicit language doesn’t mention homosexuals and “transgenders,” and, whose legislative drafters never discussed or contemplated these groups, during their deliberations, should be expanded to include them.

Read the opinion — Gorsuch goes through such insane contortions, and, offers some incredibly poorly-reasoned examples, to justify his arrogance in re-writing the statute. According to him and the rest of the majority, discriminating against homosexuals unavoidably involves discrimination based upon sex. It’s a farce, one of the worst opinions handed down by the Court, in recent memory (a perfect pairing with the equally-atrocious DACA decision).

And, this case, alone, provides ample reason to be concerned about Gorsuch’s jurisprudence, as well as his intellect.

Primary attack point on Barrett? She chose not to take the sacrament of abortion. Also….she has shown that she can successfully be both a professional and Suzie Homemaker in a world of Fems demanding that this is impossible. In their world it is “either/or” and not “and”. FemDems hate that.

Nope. Read the comments about her ruling in Republicans of Illinois v. Pritzker.