EPA Chief Wheeler: “If you cannot demonstrate that EPA employees will be safe accessing our City offices, then I will begin the process of looking for a new location…” 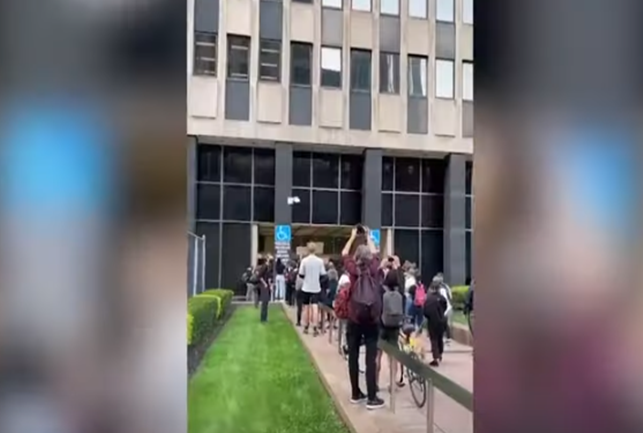 The head of the Environmental Protection Agency (EPA) has threatened to close the federal agency’s New York City office in Lower Manhattan, blaming the ongoing protests that have roiled the city for months. He specially called out the mayor and the governor in his remarks.

In a letter to Gov. Andrew Cuomo and Mayor Bill de Blasio, a copy of which was obtained by The Post, Administrator Andrew R. Wheeler torched the duo’s leadership and lashed them for their failure to act during the July “Occupy City Hall” protests that damaged the EPA office and surrounding buildings.

Wheeler also pointed to anti-ICE demonstrations last week in which at least a dozen people were arrested, and said he had received intelligence from law enforcement that the group wanted to create a “Portland like” demonstration targeting the campus they work on.

“If you cannot demonstrate that EPA employees will be safe accessing our City offices, then I will begin the process of looking for a new location for our headquarters outside of the City that can maintain order,” Wheeler wrote.

New York City’s federal buildings have been a target of recent “peaceful protests,” including the EPA offices.

Demonstrators who took part in “Occupy City Hall” protests near the EPA’s regional headquarters at 290 Broadway in July defaced the facade of the building and sent a “projectile” through its street-level glass, EPA Administrator Andrew Wheeler wrote in a letter to Cuomo and de Blasio dated Tuesday.

“Throughout these incidents, (the Federal Protective Service) has engaged the EPA and other tenants to keep us informed of potential threats,” he wrote. “However, maintaining law and order in New York City is not their responsibility; it is yours.”

The following is a video of the September 16 protest to abolish ICE. It unfolded in Manhattan following a whistleblower complaint that immigrant women detained in Georgia allegedly received hysterectomies without consent.

The move comes as many Democrats — including presidential candidate Joe Biden — have used broader racial tensions in the U.S. to highlight the heightened risks that pollution and environmental threats pose to communities of color, indigenous peoples and low-income areas.

EPA’s postponement of the “environmental justice” series was because of a Sept. 4 memo from the Office of Management and Budget that cited a directive from President Donald Trump for agencies to halt any “divisive, un-American propaganda training session.”

How long before New York looks like ghost town, same as Detroit?

notamemberofanyorganizedpolicital in reply to JusticeDelivered. | September 23, 2020 at 1:16 pm

This is just part of what New Yorkers are forced to endure.

I know! Move the office to Chicago! /ducking

I hear that office space is also becoming available in Seattle and Portland.

Some of it’s had recent work done to increase ventilation!

I have contended for a long time that there is little practical reason for most cities to continue to exist.

I also think that cities reenforce bad behaviour by bringing larger concentrations of bad players together, they reinforce each other’s worst traits.

Please put it in farm country.

notamemberofanyorganizedpolicital in reply to lc. | September 23, 2020 at 1:18 pm

It’s the EPA, why not just shut the office and never reopen? Show some solidarity with the likely hundreds of businesses in NYC that have had to do the same.

Given that most large metro regions are in the process of collapsing into unsustainable and ungovernable hell-holes, and given that they are to focus on the environment, perhaps for the regional HQ maybe move to Horseheads or Davenport, NY, would serve all of us better…

Well Rochester NY is out, and Albany is so corrupt that it would only teach EPA employees to be crooks.

Easy for him, he’s doing it on our tax dollars.
Everyone else has to come out of pocket, deal with a lease or sale…
But they are doing it anyway.

If they want to stay in New York State, move it to Plattsburgh. It’s so far north that summer occurs on the afternoon of July 15 between 2 and 4 PM.
.

Middle of no where Wyoming or North Dakota. Where they use a chain to determine wind direction and there is a vast nothingness for miles. I’ve been there and you’ll see farm houses that are only used for housing during planting and sowing seasons and they’re miles apart from each other.
And put it at least 10 miles from any housing. We could really downsize the hell out of EPA when the employees take a look at those two states and where they’d have to relocate.
I’m sure we’d see a huge percentage quit the EPA.

I’ve heard that the parking meters have electrical outlets for your car’s engine block heater.