Why does he keep lying about this? 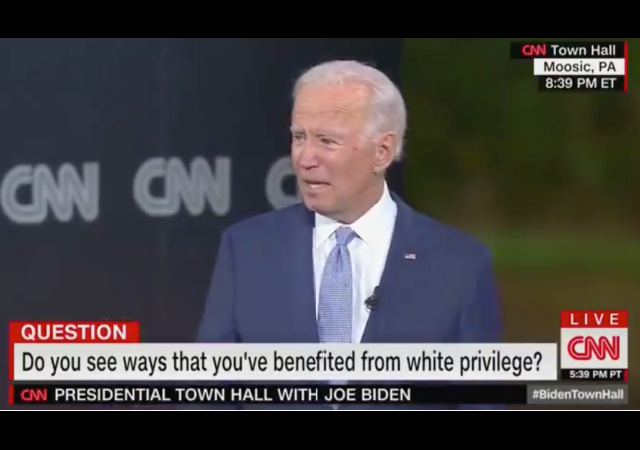 Back in 1987, Joe Biden claimed that he is the first person in his family to go to college. It wasn’t true, the media called him out, and his chances for the presidency went down the drain.

But the media is friendlier now, I guess, because Biden repeated that lie during a CNN town hall on Thursday night.

Biden: “Guys like me, the first in my family to go to college… we are as good as anybody else, and guys like Trump, who inherited everything and squandered what they inherited, are the people I’ve always had a problem with”

Joe Biden resurrected an old lie tonight, claiming he was “the first in my family to go to college.”

In fact, Biden was forced to admit in 1987 after he plagiarized a British politician that that was not true. https://t.co/8u0F3c2UDg pic.twitter.com/mQnee9LahM

The New York Times in 1987 had to publish that Biden lied.

Biden had said he was “the first in his family ever to go to university.” In fact, Mr. Biden said today, “there are Finnegans, my mother’s family, that went to college.” pic.twitter.com/HdDxMQomSk

A video Hemmingway published also shows that Biden has a history of yelling and belittling people who call him out on his lies. We’ve seen that already on the campaign trail this year.

A voter simply asked Biden about his law school and where he placed in class:

Biden lashed out at the man angrily, making a series of claims that were not true:

BIDEN: I think I probably have a much higher IQ than you do, I suspect. I went to law school on a full academic scholarship, the only one in my — in my class to have a full academic scholarship. In the first year in law school I decided didn’t want to be in law school and ended up in the bottom two-thirds of my class, and then decided I wanted to stay, went back to law school, and in fact ended up in the top half of my class. I won the international moot-court competition. I was the outstanding student in the political science department at the end of my year. I graduated with three degrees from undergraduate school and 165 credits — I only needed 123 credits. And I’d be delighted to sit down and compare my IQ to yours if you’d like Frank.

Worse, a release of his academic records showed that Biden had plagiarized five pages of a law review article.

Biden was also busted for lifting lines from the speeches of British Labor politician Neil Kinnock and other politicians. In Kinnock’s case, he even took biographical details as his own, such as that he was the first member of his family to attend college. That was true for Kinnock, but it was not true for Biden, as he admitted in 1987.

Now that Biden is the candidate the media is silent on Biden’s lie about college. The media, including The Washington Post‘s fact-checker, glossed over the lie. Weird, because WaPo brought it up a few times.

Then in July, The Washington Post fact-checker had to acknowledge the video of Biden attacking the voter. Wisconsin voters contacted WaPo to fact-check a GOP ad about the 1987 video.

Biden acknowledged he lied about his academics. He also admitted the plagiarism and that he wasn’t the first one to go to college.

“…the media is friendlier now, I guess…”

Do you know the difference between the media now and Biden’s campaign staff? Neither do I.

I suspect the media and the campaign staff don’t know the difference between them either.

“Why lie again?” The Scorpion and the Frog.

You hit it on the head. If the poor demented man can’t really remember the truth/lies he has previously stated and been exposed for which are well documented …..

notamemberofanyorganizedpolicital in reply to CommoChief. | September 18, 2020 at 5:39 pm

“Hmmmm….what does this pretty RED BUTTON do?”

Mistake. I meant to upvote

Did he learn anything?

notamemberofanyorganizedpolicital in reply to Firewatch. | September 18, 2020 at 5:39 pm

He majored in “Sniffing for Fun and Profit!”

He’s like an old rock group. You don’t come to hear his new lies. You come to hear the old ones, and he has some classics.

Methinks Ol’ Joe must have got to P.U. – Peking University.

“The Chinese Communist Party has a long history of making illegal donations to Democrat candidates,

to illegally donate millions to Biden and the Democrats again.

So where is the high IQ he talks about? He seems pretty marginal to me, probably around 100 or so, they say that is about average.

Joe Biden is none too bright. I recall John Sununu having a pretty quick mind.

A few guys I came up with were high achievers, going to medical school during the week and law school on weekends.

John Lithgow is a smart guy. Biden has some real intellectual problems.

Did your buddies hate themselves? Med school and law school? Sheese o Pete.

I went to law school and am glad I did,.but I probably wouldn’t do it over. I had joined the Army out of HS and then used my GI Bill and savings to pay for an undergraduate and graduate education.

My Dad, an Attorney wanted me to go to Law School. I told him ok but you have to pay for it, never believing he would agree.

He agreed. I was shocked. Still today I can’t believe he did it.

Me: So you are.going to pay tuition,books, room and board?
Dad: yes

Me: You just want me to go and I don’t have to take the bar?
Dad: yes

Me: So I get to hang around on campus with a bunch of young women, drink beer, not have a real job, pose as the distant older veteran who just ‘needs the right girl to house break him’.
Dad: yes

Learned many things, mostly that peoples natural disdain for lawyers is justified. Sometimes I wonder how people without a legal education navigate the overly litigious ins and outs of daily life. Never took the bar but had a very nice three years off before beginning the real world.

notamemberofanyorganizedpolicital in reply to CommoChief. | September 18, 2020 at 7:34 pm

“Learned many things, mostly that peoples natural disdain for lawyers is justified…”

At the height of his intelligence he may have had an IQ greater than 100 maybe as high as 110, but since his strokes and apparent dementia I expect it has fallen much lower. He would certainly be the lowest IQ president in modern times. Of course intelligence does not guarantee success, Hover was a brilliant man, but pretty much a failure as president. Smarter is certainly better than dumber everything else being equal.

I can see that going to law school without any intent to take the bar would make the law school experience unfulfilling. In our law school class in the 60s we had two Viet Nam vets. They were mature, highly motivated, and hard working students.

On the contrary, the experience was very fulfilling. I had zero pressure and had a great social life. I actually enjoyed, what for many L1 is soul draining scut work of preparation and briefing cases, researching and argument.

The old day one ‘look left, look right only half of you will be here to graduate’ didn’t phase me. I was playing with ‘house money’. My classmates were kids without real world, non-academic experience and as a result very uptight, afraid to make a mistake or worse get the Prof pissed off.

I could simply do the research, prep, write out my brief and practice my verbal response if called upon. Then I could relax, drink and chase girls. Nice ‘work’ if you can get it.

I still use much of the training. I can’t help but look at something through the lens of my legal education.

Good thing he didn’t go to “math school.” It’s possible for both these statements to be true without your class rank changing at all.

The United State is not a corrupt society, but our government is completely corrupt at its highest levels, in federal state and city governments.

Just look at obama, clinton, biden, kerry, pelosi, etc. etc etc. Then look at the psychos in office as governor of democrat states. Then look at insane people elected mayors like in NYC, Chicago, Los Angeles.

Lord Acton wrote:
“Power tends to corrupt, and absolute power corrupts absolutely.”
But I tend to agree more with a slightly modified quote of Frank Herbert “Power attracts the corruptible those already corrupt.”

Power tends to bring out who you really are.

Biden could say he’s from Mars and it wouldn’t matter to the democrat base, no less than if PDJT said it.

The difference is the awareness of facts by the people in each base.

The propagandists AKA media is in full campaign mode. They aren’t even trying to hide it anymore, even though they claim to be unbiased.

Once in a while you see a minor honest criticism of Dementia Joe telling his lies, but that is only to push a cover, not any serious effort to tell the truth about things.

Now with RBG dead, it will get worse. The left are doing all they can to steal the election. They want Harris in as President, even though she couldn’t even get anywhere in the clown car primaries.

Biden and Obama always lied. Biden is just giving us more of the same crap that filled the Obama administration.