NBC: “the commander of troops in the region says a detailed review of all available intelligence has not been able to corroborate the existence of such a program” 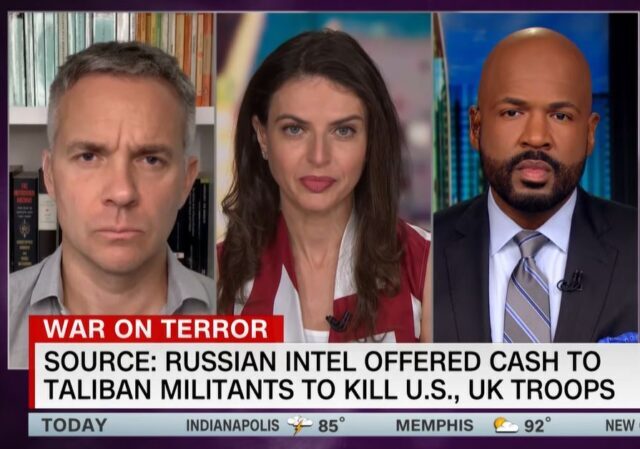 Democrats and their media cohorts have spent the last four years throwing everything they can dream up at President Trump, hoping against hope that this time it will stick.  That this time, finally, after Russia, impeachment, Ukraine, unfounded accusations of racism, outright lie after outright lie . . . this time the latest invented anti-Trump smear will stick, the needle will move, Trump will lose support.  This time.  For sure.

It doesn’t happen, but they keep trying.  What’s that old saw about repeatedly doing the same thing and expecting different results?

A couple of months ago, their attempt to smear Trump revolved around a bizarre internet rumor that he knew Russia was paying the Taliban “bounties” for members of the United States military.  “He knew!”, they claimed in faux horror (like they care about our troops), and he did not stop it!

This never passed even the most basic logic test.  Why on earth with Russia (or anyone) pay the Taliban to do what it does for free?

I’ve always wondered why anyone would believe the Talaban would need money as an incentive to kill our troops. Never made sense.

Color me unsurprised to learn that after two months of doubtless desperate digging, the leftstream media simply can’t confirm the hysterical, groundless “report.”

Two months after top Pentagon officials vowed to get to the bottom of whether the Russian government bribed the Taliban to kill American service members, the commander of troops in the region says a detailed review of all available intelligence has not been able to corroborate the existence of such a program.

“It just has not been proved to a level of certainty that satisfies me,” Gen. Frank McKenzie, commander of the U.S. Central Command, told NBC News. McKenzie oversees U.S. troops in Afghanistan. The U.S. continues to hunt for new information on the matter, he said.

“We continue to look for that evidence,” the general said. “I just haven’t seen it yet. But … it’s not a closed issue.”

McKenzie’s comments, reflecting a consensus view among military leaders, underscores the lack of certainty around a narrative that has been accepted as fact by Democrats and other Trump critics, including presidential nominee Joe Biden, who has cited Russian bounties in attacks on President Donald Trump.

This is the closest we’ll get to an admission that the leftstream media ran days of uncorroborated “reports” about the alleged bounties and that they knew they were running rumors, not news.

Dems & media don't care because they got 8 weeks of BS narrative out of it. https://t.co/LBxbjVyQSY

Honestly, is there any industry or organization more susceptible to “foreign interference,” in this case ridiculously obvious internet trolling, than the mainstream media?  The answer is, I think, a resounding “no.”

The runner-up would be the Democratic Party itself, but their leaders actually understood that all of this, like so much they’ve spewed over the past four years, was utter nonsense.  I’m not so sure the media is aware just how hard they are being played by Democrats who are tweaking their TDS strings for all they’re worth.

The media loses in this game, of course, and is seeing record lows in public trust. Democrats certainly don’t care about the decline of the media.  They are happy to endlessly dupe a willing, TDS-addled media who, upon admitting they’ve been duped yet again by Democrats, will gleefully jump on the next lie, despite the obvious damage to their own credibility and bottom line.

“What deal can we have, Crazy Media?”

If CNN were a book, it would be shelved in the Fiction section.

notamemberofanyorganizedpolicital in reply to The Friendly Grizzly. | September 15, 2020 at 9:58 pm

Milhouse in reply to notamemberofanyorganizedpolicital. | September 16, 2020 at 1:20 am

Definitely not. SF has to make sense.

Heard a theory that some old school JFK style democrats have recognized the radical left is destroying their party. Their strategy is to let the radical left have it’s way so the party will fracture after the PDJT landslide victory in November. Not sure I believe this would be a goods strategy since any remaining sane democrats wouldn’t have much to rebuild on. However, Every major decision the democrats have made since 2016 has been such a disaster that it seems plausible.

My alternate theory is that the entire reason Biden is the nominee is because he will allow the radical left to take charge.

Because if they ran an insane leftist like Bernie and he lost, the crazy fucks screaming about defunding the police and white privilege and racism would lose their power to the moderates who want them out.

But they’re running their so-called ‘moderate’ in Biden.

After the Trump landslide they’re going to point and say, “SEE, THIS IS WHAT HAPPENS WHEN YOU NOMINATE A MODERATE”.

And the insane left is going to seize more control, and the actual moderates are simply going to leave.

I agree that it’s going to fracture, but I think the insane left is going to be firmly in control of the party after this election.

Olinser, that’s a good theory too. I think the country has gotten a good look at the radical left, or insane left as you call them (agreed) and will roundly reject them forever.

Starting to look that way, isn’t it?

Color me unsurprised to learn that after two months of doubtless desperate digging, the leftstream media simply can’t confirm the hysterical, groundless “report.”

And color me unsurprised that the liberal MSM hasn’t run a retraction for their hysterical claims that Russia was paying the taliban to kill American troops. But then if they did that, the liberal MSM would have to admit they were wrong. And they’d never do that.

Russian government officially sanctioning bounties to the Taliban or anyone else? No.

Russian agents acting through cut outs to do so ….maybe but why? The vast majority of groups that want to kill Americans don’t need additional incentive. Nor does it make sense from a risk v reward standpoint.

The Iranians who provided funds, weaponry, training and in some cases loaned personnel to the various anti coalition groups in Iraq don’t seem to be receiving now or then anywhere near the level of publicity. Wonder why… Oh yeah …the Orange man is bad.

Intellectually cloistered, narcissistic people believe this crap. They believe ANYTHING they hear or read on the democrat media.

Their greatest fear is being wrong – and looking at a titanic fool in the mirror.

It was a stupid story invented by stupid people that have never had any kind of contact with ACTUAL Taliban.

It never passed even the most basic smell test.

How would they verify killed American troops to receive this bounty money? Are you going to cart a corpse up to Russia? Who would pay them and with what money in what form?

It sounds like some stupid cliche plot dreamed up by a low-tier hack in Hollywood.

What sounds believable is what the US has ACTUALLY done against Russia – namely give them weapons and tell them to keep fighting the good fight against Russia.

THAT would be believable, because, you know, it already actually happened.

But the idea that Russia was going to pay them some ridiculous sum of money for each killed American was stupid on its face and only got more ridiculous.

The Russian direct payment angle is, IMO, not believable. Bounties being offered in general? Absolutely true. Many of us doing interesting non standard things in Iraq had small bounties offered for our death or capture. The higher your perceived value the higher the bounty, usually less than $25K.

We were all issued ‘blood chits’. These chits were redeemable for $50,000 in Gold or currency for our safe return and printed in multiple languages.

Same for Afghanistan. Source of payment for the bounty likely not Russia. Why bother when Iran is doing it for you? Why run the risk of getting caught? The Russian intelligence apparatus is a lot of things but stupid isn’t one of it’s faults.

I’ve never understood this story. Is Russia giving material support to the Taliban? Probably. We did when the situation was reversed. If it was true, what is Trump supposed to do about it? Invade Russia?