Trump: “Do I seem rattled?” After Secret Service Shooting Near White House

Trump: “Do I seem rattled?” After Secret Service Shooting Near White House

“It’s the world, but the world’s always been a dangerous place, it’s not something that’s unique.” 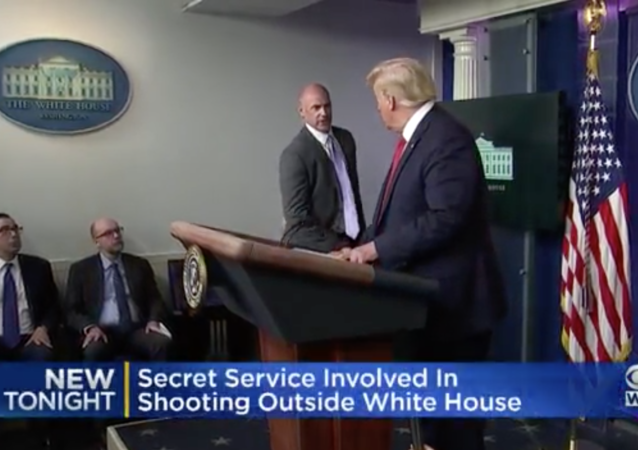 Monday evening, the Secret Service removed Trump from a press briefing and Trump returned to explain there was an alleged shooter in the vicinity (by the administration building adjacent to the White House) that was shot by the Secret Service.

Both the alleged shooter and a Secret Service officer were taken to the hospital, according to local reports.

Watch (also, Stacey has a great primer on the events here):

Late Monday night, the Secret Service released some details (though very few) about the incident. From NPR:

Later the Secret Service said a uniformed Secret Service officer had shot a 51-year-old man who said he had a gun and pointed an object at the officer, crouching in “a shooter’s stance.” The officer fired his weapon, striking the man in the torso.

The suspect and the officer were both taken to hospitals, but the Secret Service statement doesn’t specify why the officer was taken.

The incident took place at 17th St. and Pennsylvania Ave. near the White House complex.

The statement said the Secret Service Office of Professional Responsibility will review the officer’s actions, and Washington, D.C.’s police department was contacted to investigate.

Trump was asked if he was rattled to which he responded, “do I look rattled?”

REPORTER: “Are you rattled by this at all?”

TRUMP: “Do I seem rattled?” pic.twitter.com/oFDcinLKrU

Regardless of what you think of Trump or the events that transpired, many are looking at Trump’s response in the face of imminent danger as steel-spined a la Reagan:

Trump's "Do I seem rattled?" reminds me of Reagan's "Missed me"

Has the press blamed Trump for the shooting yet?

The Master of Doctored Videos; Brian Steltar; probably will, now that you have given him the idea.

CNN ran with this video above the fold last weekend. The claim was that President Trump ran away after getting a hard question from a “reporter”. CNN’s perfidy is boundless.

That editing rivals the job done on George Zimmerman by NBC.

Biden will probably question why the officer shot him in the chest when he could have just shot the poor guy in the leg.

Or, shoot the gun out of the perp’s hand.

Republican President Teddy Roosevelt was shot in the middle of a speech. After checking to see that there were no bubbles in the blood (the bullet missed the lungs) – he finished his speech.

Does the press hand out an award for the stupidest question of the day? There has to be a competition.

kudos to the officer—understand why you didn’t kill the perp but thanks for your bravery just the same—speedy recovery, sir

The perp survived because of two major reasons:
– The officer responded according to training, shot center of mass to stop the threat, and stopped shooting after the threat was over. Good work.
– The area around the White House has extraordinary medical preparedness. The first responders stabilized the perp and transported him, where he received prompt care. Good work.
Additionally:
– The USSS behaved correctly. They immediately locked down the area to protect other people from additional shooters, analyzed the situation, determined there was no additional threat, and opened the area back up by stages with additional caution. Good work.
– The press… promptly began to create fantasy scenerios since they did not have direct information over anything, which we expected. Meh.

No Republican President gets credit for grace under pressure.

I remember when George W. Bush was interrupted while reading to small children. It was the 9/11 attack. He kept his countenance, finished up with the kiddies, and then calmly took his leave. He was derided in the press as being too dumb to comprehend what was happening.

I did not vote for him the first time, but I voted for him for re-election.

I thought he died, the shooter