Please call 404-577-TIPS if you have any information you have about the murder of Secoriea Turner. 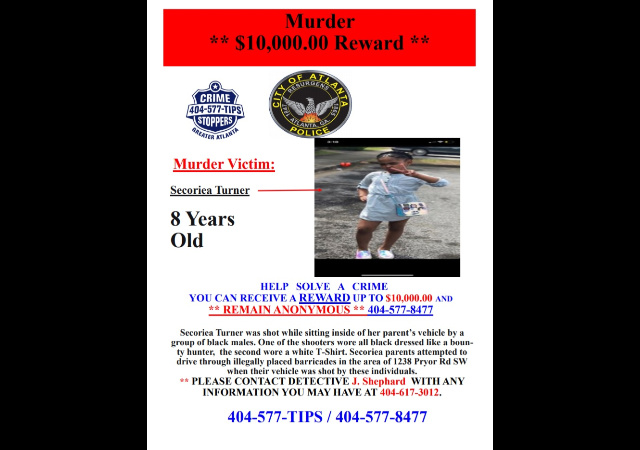 Crime Stoppers announced a $10,000 reward for information regarding the murder of 8-year-old Secoriea Turner in Atlanta, GA, over the weekend.

Officers said they responded to a 911 call near University Avenue and I-75/I-85 around 9:50 p.m. The location of the shooting was in a parking lot across the street from the now burned-out Wendy’s, which has been occupied by demonstrators since Brooks’ death at the hands of an Atlanta police officer.

Police said Turner was riding in a car with her mother and her mother’s friend when they exited the interstate at University Avenue. The driver tried to turn into the parking lot at 1238 Pryor Road when he was confronted by an “group of armed individuals” who had blocked the entrance.

“At some point, someone in that group opened fire on the vehicle, striking it multiple times and striking the child who was inside. The driver then drove to Atlanta Medical Center for help,” police said in a statement.

Police said the 911 caller told them they were heading to Atlanta Medical Center with the victim. The child died at the hospital.

“She died in my arms,” cried Charmaine Turner, Secoriea’s mother.

Mayor Keisha Lance Bottoms lashed out at the violent protesters:

“You cant blame this on a police officer. You can’t say this about criminal justice reform,” Bottoms said. “This is about some people carrying some weapons who shot up a car with an 8-year-old baby in the car for what?!?

“Enough is enough,” Bottoms continued. “If you want people to take us seriously and you don’t want us to lose this movement, we can’t lose each other.”

“You shot and killed a baby,” Bottoms stressed:

“If you want people to take us seriously, and you don’t want us to lose this movement, then we can’t lose each other in this.

“There are peaceful demonstrators across this city and across this country, and I applaud them and I thank them for being peaceful and for honoring the lives of so many people who have been killed in America because of injustice,” she continued. “But this random wild, wild West, shoot ’em up because you can, it has got to stop. It has to stop.”

“There are thousands of people who are gathering peacefully to try and effectuate change in this country, and then are those who are wreaking havoc, and they are doing it to the detriment of us all. In this case, it is to the detriment of the life of an 8-year-old child,” she said. “If you are a part of these gatherings that are becoming disruptive and becoming deadly, then on your hands too is the blood of Secoriea Turner.”

Bottoms also demanded those around Wendy’s to leave the area immediately.

But another person and two others were injured around the restaurant after Bottoms finished her press conference.

Then 24 hours later, someone shot and killed a 53-year-old man near Wendy’s and close to where Turner was shot.

It was indeed a murder; but a politically-correct murder. Does that count?

Maybe we should put a picture of the Atlanta Police Department on the back of a milk carton, maybe someone could tell us where they went.

Probably where somewhere where their AG wasn’t going to try and put them on death row after some violent felon got themselves shot trying to steal their gun.

notamemberofanyorganizedpolicital in reply to Tom Servo. | July 6, 2020 at 5:01 pm

It was murder, by BLM operatives. BLM should be designated a terrorist organization and dealt with accordingly.

Blacks are by and large hypocrites, murdering each other at staggering high rates while blaming everyone else for their self inflicted problems.

All of us need to help blacks find their way by not allowing them to gloss over a culture gone very wrong. This needs to happen for black children, children who deserve a chance to achieve a decent adult life, and for the rest of society who should not have to foot the bill to incarcerate children who have morphed in thugs, criminals in and out of jail their whole miserable lives.

The whole culture is tragic. How can it be fixed if noone is trying?

notamemberofanyorganizedpolicital in reply to JusticeDelivered. | July 6, 2020 at 9:35 pm

From what I have seen all the BLM rioters
are white crackers.

JusticeDelivered in reply to notamemberofanyorganizedpolicital. | July 6, 2020 at 10:40 pm

Has it occurred to you that media goes out of their way to show whites and to not show blacks? In any event, rioters and looters should be shot, regardless of race.

I have watched many riots, starting with 1967. Most of them were black. But in the end, all that matters is that they put other people at risk.

Bring in police or military, whatever it takes, and squash these cretins like bugs.

This was at a BLM rally

Nice people; smart, too — and really decent, and civil.

Finally, Bottoms is gettin’ it right. It took her far too long, however; she failed to think ahead with prudence and sound judgment. Maybe as a result of that equivocal, kind, kid-glove treatment, her city got and continues to get what she only hoped wouldn’t happen: violence, and blood-soaked chaos. Some call it simply mayhem.

Noticeably absent from her speech, if that’s its entirety, was any mention of a law-and-order interest in a duly processed judicial proceeding involving this wonton barbarity, a heinous murder, and, yes, the indictable, alleged murderer.

Not a PC thing to bring up, I understand. But it looks like that police-are-the-problem thing isn’t workin’ out so well, is it, Madam Mayor?

Too bad. There’s probably more, then, of the same to come.

Quick. Someone call New York Times and Washington Post and tell them about this.

Mayor Bottoms is the one responsible. Her BS inaction and race pandering have thugs in the streets and APD out sick with the blue flu.

The mayors, as with most upper echelon Left politicos, play the game as if no obvious eventualities will come from their decisions. Seattle.. CHAZ/CHOP and allowing Antifa to block interstate highways winding up with bumper tag (quite the video) or Atlanta with their WAZ (Wendy’s Autonomous Zone) with more death.

These mayors are just following the shallow logic that feels good.

Not enough. Up the ante. Say, $100 grand. Someone with money and enough outrage should offer it.

I was thinking of calling them and telling them that I think a black guy did it.

And we’re all getting a pretty good idea of what this “change” is to be.

A kilo of snort would get plenty of info.

…they could find it in the evidence room…

““You shot and killed a baby,” Bottoms stressed.”

The “baby” was 8 years old. I can understand a parent always thinking of their children as their “babies”, but for the mayor to say this is embarrassing.

These lefties allow their “babies” to be subjected to sex altering surgery, abortions, sex trafficking, and so on. They really have no respect for children and their lives. Why start now?

Black Lives Matter, when we can use them to advance our far left political agenda. If not then the hell with them.

Bottoms cares nothing for this child or any other person in Atlanta. What she is concerned about is that the child was shot and killed by a member of a group which she had allowed to wander around a burned out restaurant, with guns, and threaten people. Now that it has become a public relations nightmare for her and her masters, she is suddenly all law and order. Rrriiiggghhttt.

Is Bottoms ANOTHER lesbian?

DEMS follow a pattern right into their own death spiral.

You got that right Mac. She owns this.

But anyways, I know who killed her and I don’t want the reward, I’ll tell you for free:
BLM killed her.
The Democrat politicians that enable BLM killed her.

Now about those 10 grand, donate them to a pro-life group.
Or even better, use them to prosecute BLM and their enablers.

“… if you don’t want to lose this movement…” -mayor bottoms.

That says all anyone needs to know about bottoms and her priorities. More interested in saving a “movement” than the loss of human life. The “movement” was born of a lie, lives as a lie, and will die as a lie. Violence is a built in feature of the “movement,” and as Dr. Martin Luther King Jr. warned, will doom it to failure.

If bottoms were a serious mayor, she would have shut down the lawlessness in the city. Instead she followed the ‘give them space to destroy’ model and is reaping the results of that atrocious approach.

notamemberofanyorganizedpolicital in reply to CKYoung. | July 6, 2020 at 9:37 pm

thetaqjr in reply to notamemberofanyorganizedpolicital. | July 7, 2020 at 12:19 am

What makes the unseen speaker a patriot?

“… if you don’t want to lose this movement…” -mayor bottoms.

That says all anyone needs to know about bottoms and her priorities. More interested in saving a “movement” than the loss of human life. The “movement” was born of a lie, lives as a lie, and will die as a lie. Violence is a built in feature of the “movement,” and as Dr. Martin Luther King Jr. warned, will doom it to failure.

If bottoms were a serious mayor, she would have shut down the lawlessness in the city. Instead she followed the ‘give them space to destroy’ model and is reaping the results of that disatrous approach.

7 yr old murdered in Chicago. Out in front of grandmas house. Sickening. And it’s been going on for years. We need a national conversation on race said Barrack Milhouse Obama. Let’s talk about these poor little girls and why when he was running in 2007 he stated “we need black men to step up and be better fathers”. I remember Rev. Jessie Jackson threatening to castrate him.
A lot of these young killers are 16-20yrs old. So they were 4 or so when Obama was bullied by a black money grubbing, philandering so called man of the cloth. Obama had a real opportunity to lead by example from the bully pulpit of the presidency and shape policies to encourage black men into being better fathers by adjusting their behavior so to remain a important factor in their sons upbringing.
Thanks Barrack, you wussed out in my book and now…..

Remember the black girl who sang on TV from Chicago, and was gunned down later. What a waste.

I find it hard to understand, and impossible to explain black acceptance of this and so much more.

Lucky for the Wendy’s occupiers it wasn’t a parent with 30 round magazines and the emotion of having nothing to lose after losing their baby.