“B&G Foods unequivocally stands against prejudice and injustice of any kind.” 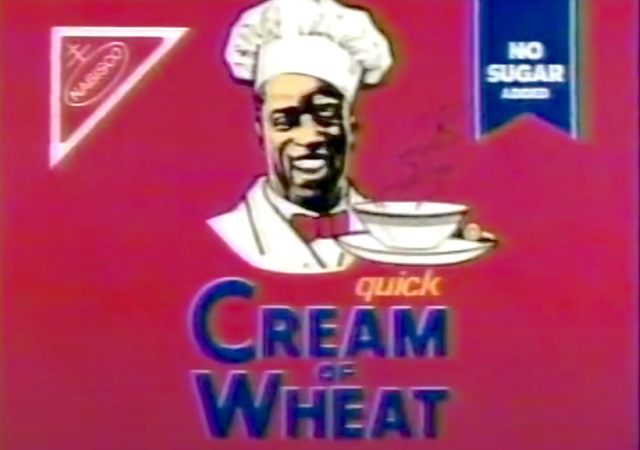 B&G Foods stated the company will begin an immediate review of its Cream of Wheat packaging since it features a smiling black chef.

B&G Foods, Inc. (NYSE:BGS) today announced that we are initiating an immediate review of the Cream of Wheat brand packaging. We understand there are concerns regarding the Chef image, and we are committed to evaluating our packaging and will proactively take steps to ensure that we and our brands do not inadvertently contribute to systemic racism. B&G Foods unequivocally stands against prejudice and injustice of any kind.

A lot of people do not know these brands’ connections to slavery and racism. But something tells me the companies knew and are only now doing something about in the wake of George Floyd’s death.

People have thought the company modeled the chef after Frank L. White. Back in 2007, a man named Jesse Lasorda began a campaign to change White’s bare gravestone.

It now has White’s “name and an etching taken from the man depicted on the Cream of Wheat box.”

Those who developed Cream of Wheat named the chef Rastus. The term Rastus is a derogatory term for black men since 1880:

Rastus—as a stereotypically happy black man, not as a particular person—became a familiar character in minstrel shows. This is documented in Every Time I Turn Around: Rite, Reversal, and the End of Blackface Minstrelsy, and Racism and Poverty in Ford City, PA, 1959: Minstrel Show, and in fiction such as Adventures of Rufus Rastus Brown in Darktown and Rastus Comes to the Point: A Negro Farce, and in popular songs such as Rastus, Take Me Back and What You Going to Do When the Rent Comes ‘Round, on radio, and in films, most notably the Rastus series of short films, with titles that included How Rastus Got His Chicken and Rastus Runs Amuck.

The minstrel shows included blackface and horrible stereotypes of black people (emphasis mine):

Thomas Dartmouth Rice , an actor born in New York, is considered the “Father of Minstrelsy.” After reportedly traveling to the South and observing slaves, Rice developed a black stage character called “Jim Crow” in 1830.

With quick dance moves, an exaggerated African-American vernacular and buffoonish behavior, Rice founded a new genre of racialized song and dance—blackface minstrel shows—which became central to American entertainment in the North and South.

White performers in blackface played characters that perpetuated a range of negative stereotypes about African Americans including being lazy, ignorant, superstitious, hypersexual, criminal or cowardly.

I totally get changing these brands. I know better late than never, but it is forced and disingenuous when you’re pandering to the mob.

Methinks the descentents are about to file lawsuits claiming corporate Racism and disenfranchisement.

And the corporations, blind to their diversity, will contribute billions of green[backs] to fund some, select, Black Lives Matter. Here’s to liberal license and progress (i.e. monotonic change).

Clearly they need to change the name to Kareem O’Wheat!

Concise in reply to notamemberofanyorganizedpolicital. | June 20, 2020 at 3:59 pm

The descendants? Looks more like the cream of wheat guy himself has the better cause of action. He’s being fired because he is black. Sounds like clear cut discrimination to me.

I always thought the pictures were a symbol of excellence. Man was I wrong to assume a black face was anything but a lawless rioter.

That said, it’s a chef, a black chef, an homage to chefs. Was diversity (e.g. racism) a motive?

Remember the Democrats Destroyed the Successful Black Middle Class as fast as they could in the 60’s to ENSLAVE them again.

Yeah, public smoothing functions (e.g. “welfare”) with shared/shifted responsibility are destabilizing in the near to long-term. Especially for a man, as the traditional earner of externally negotiable capital (e.g. tax payments), who is depressed in his eyes, and loses standing with his wife. A prescription for a dysfunctional convergence.

Since American can’t be fixed why do these knuckle dragged stay here? Don’t say we need to go not you. WE don’t think America is irredeemable YOU do, so LEAVE ALREADY.

I guess we’d better not have ANY black people on ANY packaging or in any marketing materials EVER. You might offend someone, you know. And no native Americans, no Indians, no Asians (wait, we can discriminate against them, right? or is that just in college admissions?), no Hispanics.

So, the end result of Black Lives Matter is …
white faces as far as the eye can see on product packaging in the store.
Good job guys.

Imagine the reaction of the black athletes who make millions in endorsements if somebody pushed THAT idea through.

So…why isn’t the use of logos depicting white people also racist? Shouldn’t these history deniers be getting rid of these as well???

Down with the Coppertone girl. Buh-bye, Gerber Baby. There’s the door, Little Debbie. Adios, Big Boy. The Quaker has to go, too – he’s got two strikes against him, being white and religious. Cancel Dutch Boy. I’m sure there are more that “need” to be purged.

Probably should dump Elsie the Borden mascot, since everybody knows cows give white milk – oh, the horrors….

Yup, and obviously they’ll have to rebrand Air Jordan sneakers…

How many blacks ever felt racism as they poured the cream of wheat from the box?

Yes, of course it’s a shakedown for cash from the usual suspects. Duh.

Everything a company puts on the cover of their box is angled to increase consumption and enjoyment of the product, from the typeface to the shades of color and size. Personally, I’m pretty proud that the symbol that so many food companies have selected to stand for quality, nutritious, tasty food products is an African-American, and I’m sure millions of ordinary Americans would agree.

The shakedown artists only see another opportunity to run their extortion racket.

If they are really concerned B&G should turn over all the revenue received over the life of the product to the heirs of the estate. Every darn penny. Show me some real commitment. The CEO of B&G should also turn over all his personal assets.

Otherwise you are just selling a branded product. If you want to update your brand, that is a marketing decision. So save me the woke nonsense.

Nike must now drop all endorsements of black athletes.
The basketball stereotype must end.

Especially since basketball is a game invented by a white man.

Also, the lack of WHITE players in the NBA is obvious racism.

Cuz there’s no such thing as a black chef,

a range of negative stereotypes about African Americans including being lazy, ignorant, superstitious, hypersexual, criminal or cowardly.

And exactly what new stereotype is this huge censorship campaign intended to promulgate?

“Stereotypes” can’t be eliminated; they’re arguably the basis of Platonic philosophy, and probably inherent in human mental processes. Any new stereotype which replaces old ones will be based on the actions of prominent or merely familiar characters of the day. And for what will the current crop of SJWs be remembered? Hyper-sensitivity? Racism? Looting? Arson? The era of Uncle Ben and Aunt Jemima will be remembered as the good old days, if they’re remembered at all.

Stereotype is a part of a printing press. The French term for the same part is cliche.

If the left is really serious about destroying everything historical that might be even slightly conceived as racist then the DNC should end immediately given their history of racism through their entire existence, including right up to this day, where they act as if black Americans are nothing if they dare to go against the masters in the DNC party.

KKK, the Democrats answer to Republicans and blacks who supported the Republican party. Jim Crow, yeap, all Democrats. Segregation was pushed by Democrats. The police issues of shootings that are pushed to riots and violence are from Democrat cities where Republicans have not held power in a long time.

The leaked emails of the DNC and Podesta contained racist attitudes that still pervade their party. Biden’s comment on Obama as well as Clinton’s show what their true feelings are toward the blacks that march in near lockstep with them.

Chefs are generally respected people, so this move on Cream of Wheat seems more racist to remove the black chef, as apparently he shouldn’t have a chef position.

Remove the party of hate, of racism, of the KKK, and this country might see changes that are positive rather the same old hate and Marxism which is ripping it apart at it’s seams.

Well, I have my vintage package of instant cream of wheat. The box is unopened. So it could become a collectors item, worth millions.

Now that the process is taking root, racism without evidence will morph into counterrevolutionary behavior without evidence. Re-education camps are not far away. And soon our history will be scrubbed. Oh, wait…

The problem is clearly that he’s smiling.

It would be an acceptable product package if he was snarling while curb-stomping an 80-year-old honkey or Jewish grandma.

He looks like a Pullman dining car cook, always a good (if rare treat) memory for me. Trains were great.

Robert Service wrote a poem about being distained by a Pullman car porter who prefered Auden and Eliot.

In short, it doesn’t seem very negative to me, but I’m no expert on what’s racist.

How about changing the name of Columbia University, Yale University, George Washington University, the Woodrow Wilson Center in Princeton, the Russell Senate Office Building and all the places named after Robert Byrd? BTW, I don’t think there is anything wrong with the chef on the Cream of Wheat box. Aunt Jemima bothered me because of how heavy the woman originally appeared. As for Uncle Ben’s Rice, the only thing that bothered me aboit it was that it was called ‘converted.’ What was it converted from?

Uncle Ben’s was parboiled, so it cooked more quickly. It also had added vitamins. It was an innovative product, and considered to be high quality. Its advertising said it took its name from an excellent rice grower.

I imagine the reason for using a “big” woman for Aunt Jemima is rather simple: whom would you trust more to make a delicious pancake – a fat cook or a skinny cook?

Maybe now with an emphasis on “health,” people don’t realize that it used to be that a fat chef gave the unspoken message that he loved to eat, cared about food, and by extension would be a better chef. It’s all about perception.

I have been buying Uncle Ben’s rice for the last 40 odd years. (2-3 times per month 30 minute cook time variety)

Quite frankly – I never noticed the Uncle Ben was black , simply wasnt important.

Aunt jemima AKA nancy Green, was one of the first black millionaires

Not sure if either of the descendents are still receiving royalties, but It outa piss off the descendants

I could have fixed this for them by announcing both Uncle Ben and Aunt Jemima are gay!!!!!!

Democrats are systematically removing everything black.

In this year of Two-Thousand-Twenty, a twelve month period that has thus far revealed itself to be one of terrible strife and uncertainty, the world needs a new, modern mantra; a mantra which all the masses will accept and support. As there seems to be no agreement in sight over “Black Lives Matter,” I have taken it upon myself to devise a slogan expressing a more universal truth: “All People Suck!” I’m sure we can all get behind this one. Shout it from the hilltops!