NYPD vs. NYC Health Boss: She Supposedly Doesn’t ‘Give Two Rats’ A**es About’ Cops, Union Calls Her a ‘B*tch’

NYPD vs. NYC Health Boss: She Supposedly Doesn’t ‘Give Two Rats’ A**es About’ Cops, Union Calls Her a ‘B*tch’

This is the woman who encouraged New Yorkers in February to take the subway and buses, eat out, and attend parades! 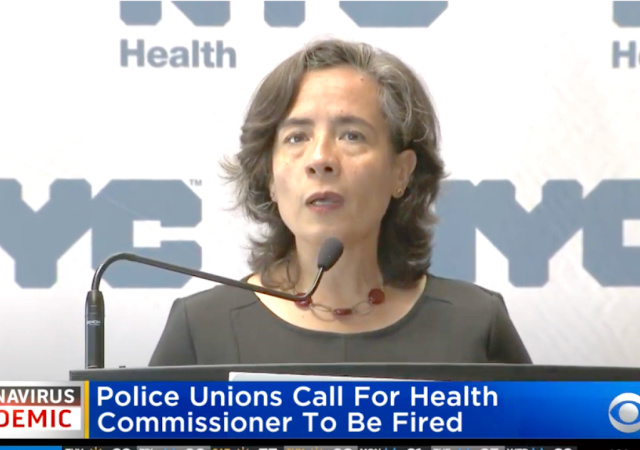 The conversation between the two “took place as increasing numbers of cops were calling out sick with symptoms of COVID-19 but before the department suffered its first casualties from the deadly respiratory disease, sources said.”

The NYPD union called her a “b*tch” with “blood on her hands.”

Sources told The New York Post that NYPD Chief of Department Terence Monahan requested 500,000 masks for his officers due to the Wuhan coronavirus outbreak. Barbot could only provide 50,000.

According to the sources, she responded, “I don’t give two rats’ asses about your cops. I need them for others.”

As stated above, Barbot and Monahan had this conversation as the NYPD witnessed more and more cops coming down with the virus. It likely happened before this moment between the two of them in March in front of Mayor Bill de Blasio:

A source who was present during a tabletop exercise at the city Office of Emergency Management headquarters in Brooklyn in March recalled witnessing a “very tense moment” when Monahan complained to Mayor de Blasio in front of Barbot about the NYPD’s need for personal protective equipment, saying, “For weeks, we haven’t gotten an answer.”

De Blasio, who was seated between Monahan and Barbot, asked her, “Oxiris what is he talking about?” the source said.

When Monahan said the gear was vital to keeping cops safe, de Blasio said, “You definitely need it,” and told Barbot, “Oxiris, you’re going to fix this right now,” the source said.

Department of Health spokesman Patrick Gallahue admitted Barbot and Monahan had a “heated exchange,” but no one wished “harm” on anyone.

The NYPD lost three members within 48 hours. On March 27, an administrative aide and civilian cleaner at NYPD headquarters Dennis Dickson died from coronavirus.

Detective Cedric Dixon of the 32nd Precinct in Harlem was the first NYPD officer to die from coronavirus. He passed away on March 28 after serving for 23 years.

The NYPD has recorded 5,490 cases of coronavirus among its 55,000 cops and civilian workers, with 41 deaths, according to figures released Wednesday evening.

Then NYPD officials found out that the “Department of Health and Mental Hygiene had a large stash of masks, ventilators and other equipment stored in a New Jersey warehouse.”

NYPD went to City Hall where officials helped the department get 250,000 masks.

The feds sent NYPD Tyvek suits and disinfectants when they found out about the complaints. The NYPD union made sure everyone knows President Donald Trump sent the officers the supplies they needed:

Ironically the head of NYC Health refuses masks to the NYPD while the Mayor blast DC for federal monies,well Mayor DeBlasio it was President Trump who supplied the masks to the NYPD. Shame on you and shame on the dysfunctional Dr Barbot. How about you fire her for incompetence. https://t.co/YcFNpEl5U5 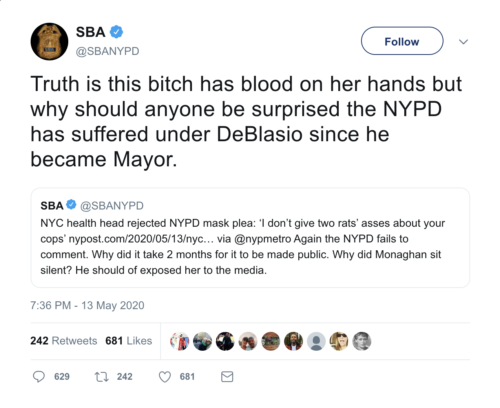 The union then released this statement, demanding Barbot lose her job.

The following press release was sent out this evening, within an hour of a NY Post article being published online. The comments made by Dr. Barbot, an appointee of Mayor de Blasio, are despicable, and will not be tolerated. Stay safe and remain steadfast and vigilant. pic.twitter.com/FsdtBHKFEp

Barbot has a lot of nerve talking to an officer the way she did because everyone should remember what she did in February:

“We are encouraging New Yorkers to go about their everyday lives and suggest practicing everyday precautions that we do through the flu season,” Barbot said on January 26th. She even added that those “who had recently traveled from Wuhan were not being urged to self-quarantine or avoid large public gatherings.”

On February 2nd, she urged the same lack of caution: “The risk to New Yorkers for Coronavirus is low, and our preparedness as a city is very high. There is no reason not to take the subway, not to take the bus, not to go out to your favorite restaurant, and certainly not to miss the parade next Sunday.”

”I’m going to be there,” she added for extra reassurance.

As we gear up to celebrate the #LunarNewYear in NYC, I want to assure New Yorkers that there is no reason for anyone to change their holiday plans, avoid the subway, or certain parts of the city because of #coronavirus. pic.twitter.com/r4gNWklGPX

She can be named in the lawsuit about this that’s coming soon.

Ewwwww! That woman is definitely a democrat.

Howsomever, the Police Benevolent Association, which as you note is the NYPD union, has called Barbot’s comment “Despicable and unforgivable”.

So it isn’t just the SBA which is outraged by Barbot’s comments.

Apparently it later came to light that the City Department Of Health had a large stash of masks and ventilators in a warehouse in New Jersey.

Indeed. My comment is simply to correct the misstatement in the article. Also, while the PBA wants her to resign, it probably does not agree with calling her a bitch with blood on her hands, at least in public.

Ehh. The PBA’s statement was certainly more temperate, but I have not seen any criticism of the SBA’s tweet from the PBA.

Truth be told, given her urging for New Yorkers to “go about their everyday lives” and her statement that “The risk to New Yorkers for Coronavirus is low, and our preparedness as a city is very high. There is no reason not to take the subway, not to take the bus, not to go out to your favorite restaurant, and certainly not to miss the parade next Sunday.”, she likely does have blood on her hands.

As for the SBA’s other description of her…probably not helpful and detracts from their otherwise legitimate accusations.

she likely does have blood on her hands.

But it’s not nice to say so in public. The PBA wouldn’t have done that.

By the way, when exactly did Chinese New Year get renamed “Lunar New Year”, as if the lunar year has an objective starting place? The Chinese calendar is one example of a lunar calendar, but so are the Jewish and Moslem calendars. And in fact the Moslem calendar is the only purely lunar one, since it takes no account of the sun and thus its year is only 354/355 days long and drifts through the seasons, whereas the Jewish and Chinese calendars adjust themselves to the solar year by adding a 13th month every 2-3 years.

That’s a good question. Though in fairness to the Chinese, if it was by popular vote…..

She doesn’t seem like she understands that she won’t always be in a position of power or that she could very well find herself in need of the PD at some point.

It would be unfortunate if the PD response to her situation was delayed until the responding unit was able to, finally after an exhaustive search, locate PPE so that they could respond on scene to her emergency.

My advice to her would be don’t piss people off without considering the consequences. As long as she is willing to stoically accept her ‘let the chips fall’ attitude, so be it.

Does this mean that the unions are finally going to support their own cops for once?