Trump: “Those jobs will all be back and they’ll be back very soon and next year we’re going to have a phenomenal year.” 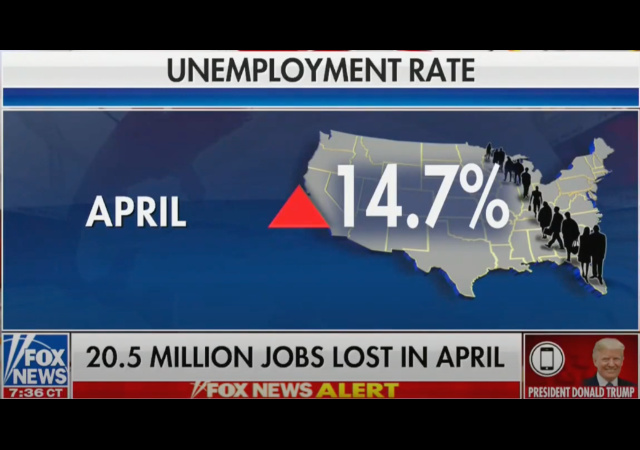 In a matter of a few months, the strong economy through President Donald Trump’s administration plummeted to record levels due to the Wuhan coronavirus outbreak.

The unemployment rate skyrocketed to 14.7% while payrolls dropped by 20.5 million.

“The sharp increases in these measures reflect the effects of the coronavirus pandemic and efforts to contain it,” reported the Labor Department.

Trump addressed the jobs report on Fox News this morning:

He said it was “right” to close down large parts of the country to save lives from the pandemic, but was optimistic for the future once the economy eventually opens up again.

“We had the greatest economy in the history of the world… and we artificially closed it,” he said. “Those jobs will all be back and they’ll be back very soon and next year we’re going to have a phenomenal year.”

Some employees chose not to lay off workers but cut back on hours:

Employers could have also cut workers’ hours as an alternative to laying them off. This trend began in March, when average weekly hours ticked down a couple notches from February. Meanwhile, the number of people working part time who would have preferred full-time work increased swiftly in March, another indication that workers saw their hours cut back.

About 23% of respondents to a ZipRecruiter survey had seen their working hours or their wages fall, or both, between February and mid-April. The average pay cut reported was 57%. 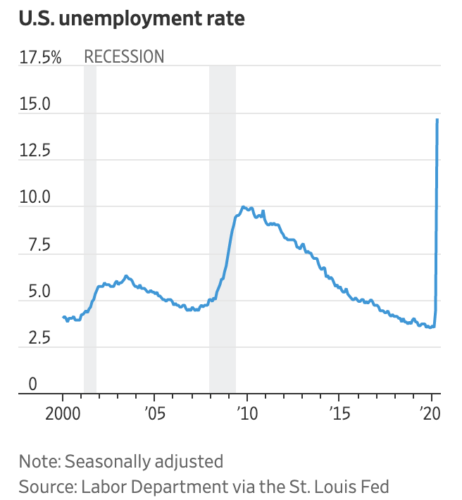 You’d think health-care would not lose jobs, but the virus limited “those not working to fight the pandemic.” Those doctors, dentists, and others cut down routine checkups or only opened their offices for “emergency procedures.”

Last month, 88% of Americans who newly lost their jobs in April reported being on temporary layoff. The unemployment rate rose more for women than men. Among racial groups, the rate increased the most for Hispanics, up 12.9 percentage points to 18.9%. The rate rose about 10 percentage points each for white, black and Asian Americans.

Average hourly earnings increased by 7.9% in April from a year earlier, likely reflecting that many low-wage workers lost their jobs, while more white-collar employees worked from home. 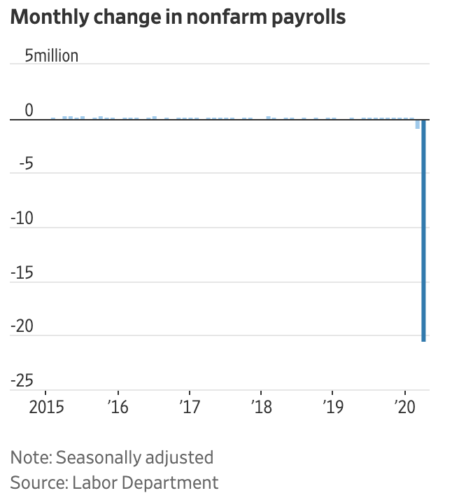 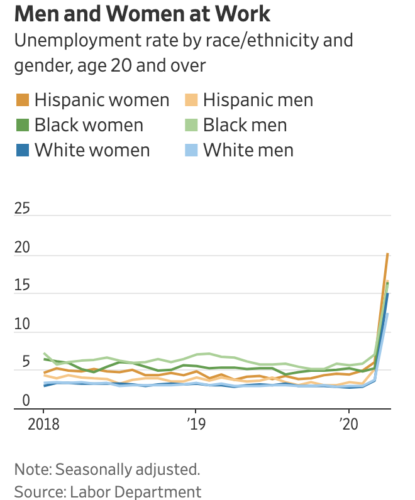 Quite a few laid-off Americans have not begun a job search due to hiring freezes or worries that work would expose them to the virus.

I always wondered if the economy would not take as long to recover as some have said due to the demand for employees. States have begun to reopen their economies and more people have decided to leave their houses to escape weeks of quarantine.

Erica Groshen, the former commissioner of the Bureau of Labor Statistics under President Barack Obama, said if the employees have a strong “connection to their previous employer, then the more rapidly we can start up jobs again.”

Stitchin’ Post owner Valori Wells is down to eight employees from thirteen. She hopes she can bring back those she had to lay off.

IF IT WERE TODAY, the economy would rebound quickly.

But at this point every week, hell every DAY, that this idiotic lockdown continues means more business that never open back up.

More and more businesses are either opening up now and praying that enough people come to keep them going, or making announcements they will never open back up.

If Trump allows governors to continue throttling businesses, ESPECIALLY restaurants, then a huge number are just never coming back, and it will take a long time to fill that void.

notamemberofanyorganizedpolicital in reply to Olinser. | May 8, 2020 at 2:00 pm

The Democrats know that.

That’s what they’re banking on.

no one keeping this shut down going into July will win in November.

Mary, we all need a little vacation away from all the Democrat Dictator Wannabes.

U.S. Sen. Ted Cruz Gets a Haircut at Dallas’ Salon a la Mode

Go to the 22 minute video on that site, below the NBC clip.

It is much better.

Our esteemed rino governor just finally allowed me to go to the golf course and (by judicial redress) to go to the gun store. Oh the humanity!

Gov Abbott has been keeping all the chicken littles happy. I’ll vote for him again against a democrat, but I’ll be holding my nose.

Best you can say is that he hasn’t been as bad as a lot of them.