At press briefing, Trump also played video montage of media downplaying virus risks “because we’re getting Fake News and I’d like to have it corrected” 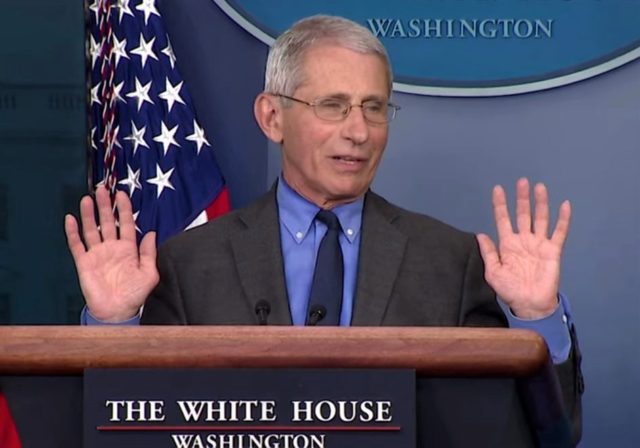 That claim was made after the media misleadingly cherrypicked a portion of a sentence from an interview Fauci did with Jake Tapper on Sunday. That created another frenzied news cycle about how Trump had blood on his hands.

“When people discuss — not necessarily in front of the president — people discuss, they say, ‘Well you know, this is gonna have maybe a harmful effect on this or on that’. So it was a poor choice of words. There wasn’t anybody saying, ‘No, you shouldn’t do that’, ” Fauci said.

Fauci said he was answering a “hypothetical question” on TV.

Fauci said on two occasions he and White House coronavirus coordinator Deborah Birx approached Trump twice to recommend restrictions and that both times he agreed.

“The first and only time that Dr. Birx and I went in and formally made a recommendation to the president to actually have a ‘shut down’ in the sense of not really a shut down but to really have strong mitigation. We discussed it, obviously there would be concern by some that, in fact, there might have some negative consequences. Nonetheless, the president listened to the recommendation and went to the mitigation,” Fauci said.

Fauci added: “The next second time that I went with Dr. Birx into the president and said, ’15 days are not enough. We need to go 30 days.’ … the president went with the health recommendations and we extended it another 30 days.”

CBS News reporter Paula Reid then suggested Fauci’s statement was not voluntary, to which Fauci told her everything he does is voluntary and not even to suggest otherwise.

Journalist asks: “Are you doing this voluntarily?”

Dr. Fauci: “Everything I do is voluntary.. please.. don’t even imply that.” pic.twitter.com/sG8TV9ndVI

Trump also offered a spirited defense of himself and critique of Democrats.

President Trump: "In February, Nancy Pelosi said we should come to Chinatown. This is late February. 'Come to Chinatown, we think it's very safe, come here, let's all have the big parade.'" pic.twitter.com/S8BrF1u2oU

In a moment that had laughing so hard I cut my hand while slicing cheese (seriously), Trump then made the reporters in the room sit through a several-minute long compilation of media downplaying the virus danger, as well as a timeline of Trump’s actions.

Jon Karl of ABC News was not amused, but Trump promised more.

SAVAGE TRUMP?@jonkarl reacts to the montage of the Media downplaying Coronavirus: "I have never seen a video like that played in this room.. Why did you feel the need to do that?”

TRUMP: "Because we’re getting Fake News & I’d like to have it corrected”https://t.co/pamG2yii1u

CNN and MSNBC actually continued coverage for much of it, then cut away.

As an added bonus, CNN proved why its news coverage is total garbage. Get a look at these chyrons, which a CNN reporter is quite proud of.

Four banners on @CNN over the last five minutes … pic.twitter.com/UBxpCcY2vl

Blatantly lied…or was blatantly taken out if context by a media only to willing to lie to the people.

I thought Paula was a dog?

You know what a female dog is called don’t you?

Fauci has been in the swamp for 30 years.

He has finally rising to his level of incompetence.

The guy loves hillary clinton. Either he’s in on the $ scam, or he’s got bad judgment.

The fallout from his interviews with CNN did not arise from “media spin” but from his out-and-out lying about Trump not taking his advice. I just don’t trust him. He continues to feed the fascist narrative of blanket suspension of our constitutional rights at the whim of people like him. He is relishing the spotlight and it is clear to me that he is politically driven. At least our Surgeon General has rejected the models and is referring to the data itself.

Let’s not be sheep on this. We have been stripped of our constitutional rights. This must never happen again. Once this is over, we need to put in place clear legal barriers around our rights, barriers that at least require the discussion to take place forcing us to be grown-ups about what constitutes acceptable risk.

Our constitutional freedoms weren’t voted into being. A war was fought so we could have a chance to be free. Now a doctor just waves them away? You don’t have to be a scientist to grasp what is fundamentally wrong about Fauci and his ilk.

Impressed with Fauci’s political skills. As director of NIAID of course he has good political instincts, but that usually doesn’t involve dealing with the White House Press Corps. He handled them very, very well.

I haven’t had any problems with anything Fauci has actually said – CNN and MSNBC work as hard as they can to twist things he said when he hasn’t been as careful in phrasing things at times. But we should all understand that he comes at this issue from an Academic/Medical Professional point of view, that’s who he is. That’s his expertise. Don’t expect him to understand economic concerns, that’s not his area, he doesn’t care about that, and he shouldn’t. That’s why he’s just an advisor, Trump is the one who has to listen to ALL advisors, medical, scientific, and economic, and make a decision based on all of their combined advice.

Excellent points and I agree. Fauci is a superb scientist; he advises on science and medicine. He’s not perfect but he’s pretty good. It’s Trump’s job to listen to everyone, and it looks like Trump is also pretty good.

CNN didn’t twist the part where Fauci lied about Trump being too slow to follow his advice. A lie is a lie and that was a big stinking whopper of a lie.

I truly hope that people who ordinarily don’t pay attention to politics notice what the WH press corps is up to.

The effort required to navigate around the media embargo on raw, untainted news product requires lots of time and patience.

I cut my hand while slicing cheese (seriously)

MSM pwned again by the master.

Sorry to read you sliced your hand while you cut the cheese……I had to it was just begging to be said.

Having said that I do hope you are ok.

PDJT should have just said he didn’t know anything about it until early April when he read about it in the newspapers.
That would have really been funny.

We seem to get most of our”facts” on President Trumps bad handling of the virus in America from your fake news and no doubt they will show only the 4 banners from cnn.
I think your President has done a pretty good job condidering so much hatred and lies spewed at him from the demrats and so called media.

Next we’ll be hearing breathless reports about torture chambers in the White House cellars. Some “source close to the White House” overheard somebody talking about something-or-other, and if this leaker is a woman then we’ll have to believe her, because reasons.

I fully expect clown costumes to be part of this fantasy.

A “source close to the White House” means they were standing across the street from it.

notamemberofanyorganizedpolicital in reply to tom_swift. | April 15, 2020 at 1:19 pm

Paula’s COMMUNIST Chinese government PIMP Master made her say THAT – right after he gave her her two bits.

This guy is having WAY too good of a time.

Even CNN’s left-wing viewers should be unhappy with CNN censoring Trump’s video clips. The clips aren’t fake, just embarrassing. They show the MSM people saying the opposite of what they’re saying today. The CNN viewers should look for a website where they can watch the video and decide for themselves, rather than let the partisans at CNN determine what they can see and what they can’t.

Fauci blatantly lied on Sunday about his recommendations. He is on tape saying as late as March there was nothing to worry about. The guy is incompetent.

Fauci was against people using Hydroxychloroquine. He loves the power and loves the spotlight and will gladly trade lives to keep it. He said he was so overcome with Hillary Clinton’s speech he cried. I don’t trust him.
Trump needs to pardon Roger Stone.