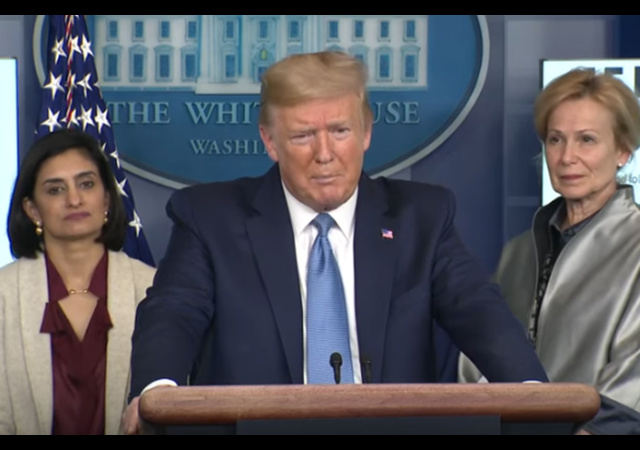 During the press briefing Monday afternoon, President Donald Trump, Vice President Michael Pence, and the Coronavirus Task Force focused on sharing a new set of guidelines that Americans should follow to prevent the further spread of the Wuhan Coronavirus.

Speaking during a briefing of the coronavirus task force, Trump outlined a plan to slow the spread of COVID-19 in 15 days.

“With several weeks of focused action, we can turn the corner and turn it quickly,” Trump said. “Our government is prepared to do whatever it takes.”

The guidelines advised that older people and those with underlying health conditions “stay home and away from other people.”

Officials recommended that large swaths of the population isolate themselves and everyone avoid social gatherings or groups of more than 10 people.

One reporter asked how long the concern related to the virus would last.

Trump said that “people are talking about July, August, something like that.” He said he likes to say it “washes through” but “other people don’t like that term.”

Asked if this was “the new normal until the height of summer,” Trump replied: “We’ll see what happens. But they think August, it could be July, could be longer than that.”

National Institute of Allergy and Infectious Diseases Director Anthony Fauci stressed the new guidelines apply only to the next 15 days.

The press became animated when they asked Trump if the country is headed for a recession. In fact, a good portion of the exchange with the President was on the stock market. Trump’s response was pitch-perfect.

President Donald Trump acknowledged Monday that the U.S. economy “may be” heading toward a recession because of the coronavirus but predicted growth would bounce back strongly.

“Well, it may be,” Trump said in the White House in response to a question about whether the economy is “headed” toward a recession.

I suspect that when this is over, we are going to have a real “Summer of Recovery” under Trump, instead of the fake one we had under Obama.

I had a few observations as I watched Monday’s briefing. One was that a wonderful benefit of the new social distancing policy is that fewer journalists were in the briefing room to pester the Task Force with their stupid questions.

Another observation is in regards to the Coronavirus Task Force itself. It appears that some of the members refrain from fully expressing their disdain and anger at the pack of hyenas they now face during these updates. They confine their annoyance to death-glares and grimaces.

Several questions Trump was treated to were included such trivialities like what happened during his COVID-19 test. One reporter indicated healthcare providers are “terrified” of the virus. While medical professionals are duly concerned about having the equipment and resources they need,  the use of scare-words in this situation is pathetic.

Ace of Spades prepared a post that sums up my own thoughts on the Monday briefing: When This Is Over, We Are Going to Have Serious Reckoning With the Media About Their Deliberate Incitement of Public Panic, Including Nonstop Senate Inquires About “American” Media Corporate Connections to China.

And we should take a look at Wall Street, too.

In a record-breaking six-week time, American researchers have sequenced COVID-19 and prepared a vaccine for testing.

U.S. researchers gave the first shot to the first person in a test of an experimental coronavirus vaccine Monday — leading off a worldwide hunt for protection even as the pandemic surges.

With a careful jab in a healthy volunteer’s arm, scientists at the Kaiser Permanente Washington Research Institute in Seattle begin an anxiously awaited first-stage study of a potential COVID-19 vaccine developed in record time after the new virus exploded from China and fanned across the globe.

The Federal Motor Carrier Safety Administration has issued a 50-state waiver to the Hours of Service Rule for commercial vehicle drivers transporting goods related to the COVID-19 outbreak.

The order was issued late Friday evening and had been foretold earlier in the day, on the back of numerous state waivers for intrastate transportation. It will last until the end of the day on April 12 or until the end of the emergency declared Friday by President Trump, whichever is sooner.

FMCSA’s order is sweeping. And while there are numerous freight movements that wouldn’t fall under it, there are plenty that will.

Possibly the most important waiver that will affect truckload carriers will be the one that impacts equipment and supplies of food for the emergency restocking of stores. State trucking association authorities contacted by FreightWaves on Friday all commented that the strain on the trucking system created by the enormous need to restock stores stripped bare by shoppers laying in vast quantities of supplies was enormous.

I question the level of their commitment!

XRDC has cancelled its mass die-in at the Smithsonian National Museum of Natural History this Sunday because of the COVID-19 pandemic.

Responding to the science and the public health emergency declared in DC, we feel it would be irresponsible to go ahead with the action.

So I was in the kitchen with the wife this morning. I told her I’m feeling a little warm, I think I have a high temperature. She comes over and tries to put HER BARE HAND on my forehead. “WOAH, WOAH What the hell are you doing!!?”
“I’m feeling your forehead to see if your sick.”
“What the hell is wrong with you? This is highly contagious!! If I’m sick then you’ll get it too and who’s gonna take care of me?!!”
Selfish bi…

Slowing spread means we will be better able to take car of people, it also means that the disruption will last longer.

I am certain this will last at least 3 months, and likely 6 months, possibly over a year.

Warmer weather doesn’t kill viruses…that’s a myth. The increased temperature has no effect, the humidity increases viral sustainability, and the UV light that kills viruses is limited to outdoor areas that get enough UV light to do so. Our immune systems might get a tad healhier as we stay out of the cold, but that isn’t really conclusive (especially with climate controlled environments).

Warmer weather only helps because people spread out more and go outdoors into more open air with less contamination from others.

Right now, we are staying in but are fairly isolated to limit spread. So, in effect, we are trying to do the same thing that warm weather does now. The only reason summer might help is that we will have been doing this social distancing thing for a longer period of time.

Meanwhile, Italy is allowing patients to die, alone while suffocating, there are too many to do otherwise.

I’ve turned off the TV and expect my only media to be looking at funny dog pix on Instagram. I can barely open the home page of the WSJ for fear of seeing the market in a continued deep decline.

Hubby had Maria Bartiromo on early this morning and she and her panel uttered the D word. No, not Dem, Depression. I thought that was highly irresponsible of such a smart panel. To a one, Maria’s panel over the last few months said that they didn’t even see a recession on the horizon. Now, it’s a full recession into a depression? Color me jaded.

Maybe a bit tongue in cheek, but jaded is appropriate for St. Patrick’s Day…

That being said, someone I know commented that a financial disruption could result in more deaths than Covid-19.

And don’t even think about auto crashes. Will they take away cars next?

I bet that the first quarter finishes profitable, all that last minute buying, virtually selling out most inventory, surely was a great 1st quarter ending.

I am sitting out side on a nice sunny Florida morning. The temperature is in the high 70’s headed intp the 80’s. Things are looking pretty good.

So much to smile about. So add to that the hilarious head line “Extinction rebellion cancels mass die-in” Who says the leftist don’t have a sense of humor.

So they can only do their play dead show when the world is healthy and “boring” enough for them to do so.

Here is something to think about, if the numbers expressed are accurate. If the 97+ negative test numbers, for those with COVID-like symptoms is accurate, what disease are we really treating for?

For those of you who have ever been to the doctor, or know someone who has been to a doctor, then you know that they almost always present the worst case scenario. Why? Because if patient is told that they probably only have 6 months to live and live for the next 5 years, they never sue the doctor for a misdiagnoses.