“Disclose, divest or this will be our death” 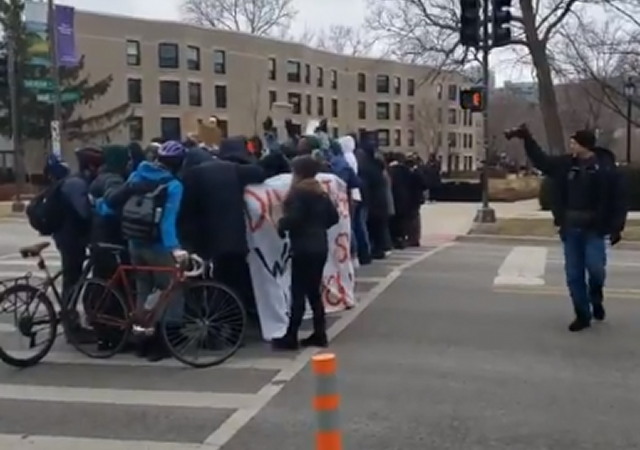 Blocking streets will not win support for your cause. Why do people do this?

Northwestern climate protesters shut down roadway after being told no

Climate activists at Northwestern University shut down a major roadway Friday after finding out that the school would not be going through with a fossil fuel divestment plan proposed by the activists last in February.

After the Northwestern University board of trustees rejected a proposal to completely divest from the top 100 oil and gas companies, more than 60 protesters reportedly gathered to block a major campus intersection.

Protesters from the group “Fossil Free Northwestern” chanting “Disclose, divest or this will be our death” consisted of both students and faculty, according to student newspaper The Daily Northwestern.

One student protester told The Daily that the group of protesters “wanted to show the Board that they cannot hide from the Northwestern community,” adding “as much as they may try to maintain bureaucratic distance between the general population and themselves, we will continue to hold them publicly accountable.”

Yet another public display of stupidity at a “top” university.

Wow, looks like about 40 people. How big is the Northwestern community, 10,000 maybe?

Invest double if they’re good stocks. Obviously the student opposition isn’t even there.

The way the markets are looking, this might be a good time to buy. If there’s anything to buy with.
.

Turn the heat off in the dorms and see how they like going without fossil fuels.

Identify every protester that is a student and kick their socialist ass out of school.