“the single largest strike by U.S. authorities against CJNG, and this is just the beginning” 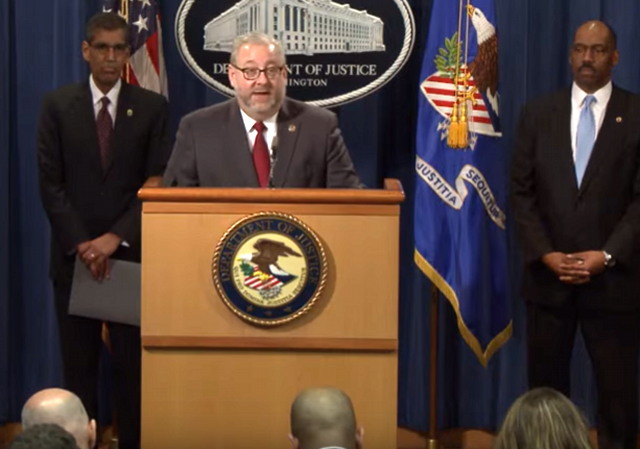 The Department of Justice and the Drug Enforcement Administration just announced the arrest of over 600 alleged Mexican Cartel members as part of an operation called “Project Python.”

The Department of Justice (DOJ) and Drug Enforcement Administration (DEA) announced Wednesday that more than 600 arrests have been made as a result of an interagency operation cracking down on Mexican cartel activity.

“Project Python,” a DEA-led initiative, targeted members of Cártel de Jalisco Nueva Generación (CJNG). According to the DEA, over the last six months federal law enforcement officials have been monitoring the activities of the accused.

The operation resulted in more than 600 arrests nationwide, 350 indictments and “significant seizures of money and drugs,” according to the agencies.

“Project Python marks the most comprehensive action to date in the Department of Justice’s campaign to disrupt, dismantle, and ultimately destroy CJNG,” Assistant Attorney General Brian A. Benczkowski said in a statement.

Benczkowski cited an executive order President Trump passed shortly after Trump was inaugurated in 2017 that condemned cartel operations in the U.S. and directed federal law enforcement to use the Threat Mitigation Working Group, which was put in place by the Obama administration in 2011.

The video below is 20 minutes long but the first five minutes cover the basics:

This announcement marks the successful conclusion of six months of investigative and enforcement activity targeting CJNG, culminating in large scale arrests throughout the country within the past week. Project Python has resulted in more than 600 arrests, 350 indictments, as well as significant seizures of money and drugs.

“Project Python is the single largest strike by U.S. authorities against CJNG, and this is just the beginning,” said Acting Administrator Uttam Dhillon. “This strategic and coordinated project exemplifies DEA’s mission: to disrupt, dismantle, and destroy drug trafficking organizations around the world and bring their leaders to justice. Today, DEA has disrupted CJNG’s operations, and there is more to come as DEA continues its relentless attack on this remorseless criminal organization.”

Trump announced five months ago that he intends to nominate him as administrator, but he hasn’t yet done so. I suppose because the nomination line is already crowded, and the senate Democrats are holding it up as much as they can.

Ah. So he’s not “acting” because the Senate is dragging their feet, but because he hasn’t actually gotten the real nomination. Interesting.

Probably makes him much easier to fire, if he doesn’t work out. I wonder if that’s intentional.

I can’t find it where I originally saw it in the L.A. Times, but latins in the Sheriff’s Dept. there have formed gangs.

And the excuse from the top brass? “It’s their culture.”

Assimilation will save us!

I am reminded of the British in India. I do not know if it is a true story, but if not, it makes a good fable.

A funeral was happening and they were about to lead the widow to the pyre. The British rode in to stop the sati, but the Indian official in charge said “this is our culture; it is what we do.” To which the British man said “fine, I understand that. Follow your culture. But our culture is that we hang any man who kills a woman. So you practice yours and we’ll practice ours.”

not all cultural practices are equal.

“Be it so. This burning of widows is your custom; prepare the funeral pile. But my nation has also a custom. When men burn women alive we hang them, and confiscate all their property. My carpenters shall therefore erect gibbets on which to hang all concerned when the widow is consumed. Let us all act according to national customs.[To Hindu priests complaining to him about the prohibition of Sati religious funeral practice of burning widows alive on her husband’s funeral pyre.]”

Los Angeles county hasn’t had a decent sheriff since the days of Eugene Biscaluz.

The LA Times is as corrupt as the ny times, and the idiots who work there are probably as dumb as that ny times idiot Mara Gay, who can’t do simple math on national television.

Now the lamebrain is crying racism. Yes it is sorta racism: we hate SMUGNORAMUSES.

The FBI was doing the investigating.

Pelosi is gonna be pissed. That’s her office staff.

Pelosi is gonna be pissed. That’s her office staff.

It’s great the DOG – er, DOJ – is busing these maniacs. But obama, clinton, biden, kerry, pelosi and the like are far worse threats to our nation.

Until their looting of our country is exposed, cartel maniacs are just small pimples.

They’re not on the podium, but I tip my glass to the undercover agents who put this all together at great risk to themselves.

Well, it’s a start. What the hell we do with them is a question, isn’t it? One of our prisons? Not to be dismissive of the effort, but the mainstreaming drugs and the drug culture in this country today is a disaster. We seem to be the world’s biggest market for drugs. No answers.

Any mayors or city council members arrested in any of those sanctuary cities?