Iowa Caucus Chaos: Results Not Released Due to ‘Inconsistencies in the Reporting’

Iowa Caucus Chaos: Results Not Released Due to ‘Inconsistencies in the Reporting’ 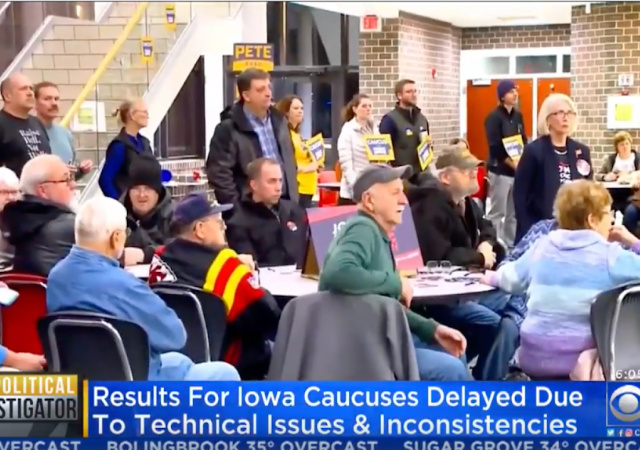 What a way for the Democrats to begin their 2020 election season! They still do not have a winner in the Iowa caucuses due to “inconsistencies in the reporting:”

“In addition to the tech systems being used to tabulate results, we are also using photos of results and a paper trail to validate that all results match and ensure that we have confidence and accuracy in the numbers we report,” Mandy McClure, the state party’s communications director, said in a statement.

She said a mobile app used to record and report results from each caucus site “did not go down and this is not a hack or an intrusion. The underlying data and paper trail is sound and will simply take time to further report the results.”

The Iowa Democratic Party (IDP) said it will name a winner later on Tuesday, but did not specify a time.

One campaign staffer described a call with the IDP as “crazy” because the officials did not answer any questions and hung up on them.

The officials also did not explain to the campaigns how they will verify the results.

Former Vice President Joe Biden lashed out at the IDP:

“The app that was intended to relay Caucus results to the Party failed; the Party’s back-up telephonic reporting system likewise has failed,” the campaign wrote in a letter. “Now, we understand that Caucus Chairs are attempting to — and, in many cases, failing to — report results telephonically to the Party. These acute failures are occurring statewide. We appreciate that you plan to brief the campaigns momentarily on these issues, and we plan to participate. However, we believe that the campaigns deserve full explanations and relevant information regarding the methods of quality control you are employing, and an opportunity to respond, before any official results are released.”

An aide to Sen. Elizabeth Warren (D-MA) said, “With every passing minute that there is a delay, we worry that the process will lose credibility.”

“Seventy-seven percent of our precinct captains have reported results from their caucuses,” a Buttigieg aide told Fox News, noting that previous projections “had the race at a virtual tie on state delegate equivalents, but from the 77 percent of reported precincts, we’re performing 8 points better than our projections.”

The aide added: “We believe we’re on our way to winning the SDE [State Delegate Equivalent] count. In the 1,301 precincts our precinct captains have reported, Pete reached viability in 1,064 (83 percent). For additional context, turnout returned to historical norms and we expect participation rates to wind up near 2016 levels. We found that our support in rural parts of the state was ~5 percent better than we expected (coming in at 28 percent so far.)”

Unreal. A precinct secretary was on hold on the hotline for an hour and they took him off hold as he was talking to CNN. He didn't respond fast enough and they hung up on him. pic.twitter.com/hPgKhDge7i

notamemberofanyorganizedpolicital in reply to EBL. | February 4, 2020 at 2:05 pm

If it’s a ? show, the DEMS have a copyright on it.

If you look at tweets from the Iowa caucuses you see that the DEM turnout was Extremely LOW!!!!!!!!!!!!

“We need more time to fabricate the data, since the plebs on the ground didn’t cooprate.”

They still do not have a winner in the Iowa caucuses due to “inconsistencies in the reporting:”

Translation: The guy who won is not the one we wanted to win, so we have to figure out how to rig the results without getting caught.

It’s hard to discover ballots in car trunks when the voting was done with an app on smartphones.

Don Jr. was thinking about just that…

Sadly, there were some people that called him a liar.

notamemberofanyorganizedpolicital in reply to amwick. | February 4, 2020 at 2:10 pm

But you know it’s the DEM TRUTH. It’s the Truth!

Tens of thousands of ballots all for Joe Biden being shipped to Iowa from Broward County Florida as we speak. “Don’t worry folks we got this covered” DNC operatives. #IowaCaucuses

“Inconsistencies in reporting”. Translation: the orders we have received are conflicting.

And they want to run our healthcare.

“If you can’t tabulate a vote, how can you tabulate a hospital bill?”

No worry – what hospital bill with medicare for all (none).

I recall reading that gulags are very cost efficient to operate. Comrade BS’s secret for funding?

Though they were, sometimes, redundant. 😉

So we should trust their math skills that say “Health Care For All” will work?

Isn’t this just typical. Whenever you put democrats in charge of anything, they f**k it up. Our local small town is run by democrats and the streets are full of potholes and cracks. They are anti-business so the town is slowly dying. But the city mothers authorized plenty of bike lanes, fancy road signs, and parks…

You are totally screwed when they build a giant sports venue to “fix” things. Baltimore was so bad they had to build two of them

notamemberofanyorganizedpolicital in reply to snopercod. | February 4, 2020 at 2:12 pm

Hey, that is my town all over.

We have to start draining our local swamps this year!

If this really is Part I of how Hillary ends up the candidate again, would there be anyone stupid enough to vote for her in November?

And what makes Hillary (or anyone else for that matter) believe that she would even have a chance at not only winning the election but not suffering the biggest landslide defeat in history? Is this her last hope for escaping prison?

notamemberofanyorganizedpolicital in reply to Pasadena Phil. | February 4, 2020 at 2:14 pm

notamemberofanyorganizedpolicital in reply to DaddyO. | February 4, 2020 at 2:13 pm

Buttigieg might suffer a tad from the fact that he funded the incompetent software and foisted it on the state party.

I do not see how the party can recover from this.

Bernie could return to the DNC, but I doubt if his followers will.

I suspect that the Bernie kids will not follow biden if he eventually wins, just like they sat out hillary in 2016. On the other hand, if Warren or Butthead wins the nomination, they will fall in line like lemmings for either one.

If they believe the DNC worked to dump Bernie and made either Warren or Butthead the “winner”, they won’t do that.

notamemberofanyorganizedpolicital in reply to Edward. | February 4, 2020 at 2:14 pm

notamemberofanyorganizedpolicital in reply to Petrushka. | February 4, 2020 at 2:15 pm

Donald J. Trump @realDonaldTrump
” The Democrat Caucus is an unmitigated disaster. Nothing works, just like they ran the Country. Remember the 5 Billion Dollar Obamacare Website, that should have cost 2% of that. The only person that can claim a very big victory in Iowa last night is “Trump”.

Bernie’s “bros” are pissed off for they know this is sabotage to keep Bernie down – and they are probably 80% (or more) correct.

Paper ballots? Paper ballots? Who are you kidding. There were no “official ballots” just numbers scribbled on a page off of a yellow legal pad. And that’s what democrats are calling the “official paper trail”. It’s insanity!

Great Maker, if this is a sign of things to come for the democrats then it’s going to be a very interesting run up to the 2020 elections.

They still do not have a winner in the Iowa caucuses due to “inconsistencies in the reporting:”

So I’ll assume that “inconsistencies in the reporting” actually means that the wrong person (perhaps Bernie?) won the Iowa caucus – a result we simply cannot have nor sanction?

notamemberofanyorganizedpolicital in reply to Lucifer Morningstar. | February 4, 2020 at 2:17 pm

Democrat Crime is so transparent.
We can confirm the final results of the unreleased Iowa Poll:

Biden has to lash out to make it look like nobody is putting the fix in for him.

An aide to Sen. Elizabeth Warren (D-MA) said, “With every passing minute that there is a delay, we worry that the process will lose credibility.”

Honey, you’ve got to have credibility to begin with to be able to lose it. Just saying.

Jawn “Fking” Carry for the win…..Hilarious Rotten Clitdone for VP

These results have just been officially certified and passed the “quality control” measures of the Iowa Democratic Party.

I knew a man would win!

:…due to “inconsistencies in the reporting:”

We didn’t get the results that we wanted.

Confirmed. It is now being reported that there was a “coding error” in the app. Translating from Corruptese to English, Bernie votes were not being property counted for Biden.

So, the DNC would have us believe that they never tested this app? That the company, providing the app, never tested it? Rriiigghhtt. This is most likely the DNC doing what it always does, rigging the contest. Sanders was the polling favorite going into the caucuses. If he does not win Iowa, then his supporters will flee the Democrat party, en mass. Maybe they will simply stay home, like the conservatives in the GOP did for years. Or, maybe they will vote for Trump in protest. Oh, the drama.

Iowa is just an illustration of Arrow’s theorem.

Heh heh … while the campaigns are all on hold for the IDP, the IDP is on hold for consultation with Brenda Snipes …

There are more than a few Iowa Democrat voters who will be casting votes for Trump this year. If the Democrats are throwing away their votes, Trump will put them to good use.